Schools come together over jazz 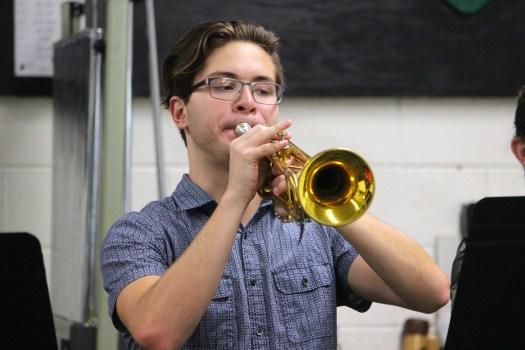 AJ Pinto runs through a trumpet part at the jazz ensemble's last practice for the year. 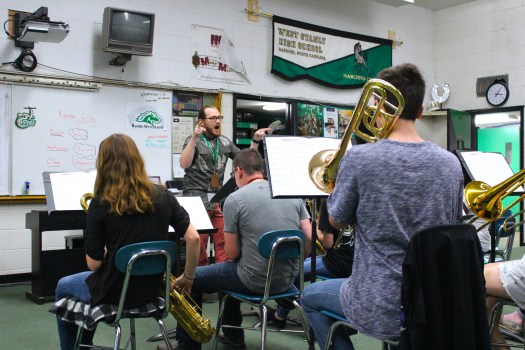 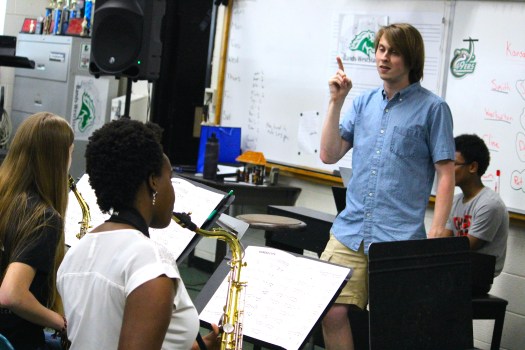 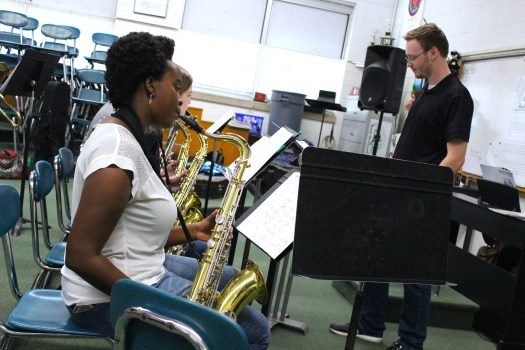 The band room at West Stanly High School was packed. Every chair occupied, every corner filled with brassy sound. Perhaps on a normal day it wouldn’t have been so unusual. But this was the day after school let out. No one had to be there.

“But we couldn’t miss this,” trumpet player AJ Pinto said.

“This” was jazz practice — the All-County Jazz Ensemble’s last one for the school year. A completely voluntary affair, directors had announced, but nearly every member was there just the same.

In fact, even as the students took up their trumpets, trombones and saxophones, one player tossed his ringing smartphone aside. Literally got it out of sight.

The four instructors teamed up this past semester to form the jazz ensemble after discovering an educational connection of their own. Smith and Warburton went through UNC Charlotte’s band program together. Drum went through the same program, only earlier. And Cline, while he did not go to UNCC, had the same practice teacher as the other three at Catawba College.

“So when (Warburton and Cline) got hired here this year, we started talking,” Smith said. “We really wanted to do something together.”

Smith had already worked with WSHS’s previous band director to form a jazz ensemble back in 2015, but it ended when the other instructor left.

“There just aren’t enough kids — or money — to do a program like that on your own here,” Warburton said.

So after meeting up a few times, the four of them decided to reform the jazz ensemble together.

“It was both exciting and a little scary,” Warburton said. “You never know how people are going to work together.”

But whether because of their educational connection or just good old friendship, the four men hit it off well. Very well, they said. Soon they were spending their off hours together brainstorming and going over songs. Even Cline, who hadn’t done much jazz before, picked up their method and added to it.

“I don’t know of four other guys who could come together and cooperate like that,” Smith said. “It’s been amazing.”

However, there was no way to do the ensemble as a regular class, so it was done as an extracurricular group. And the only time they all had available for that was Monday and Friday afternoons.

“Just try to find a teenager who wants to stay after school on a Monday and Friday,” Cline joked.

But it turns out they found plenty.

After a series of auditions, the four directors had more student musicians on their hands than they could take. In the end, they selected a group of 15 and practice began at the start of the last semester.

“It’s so different from anything I’d ever done,” trombone lead Makayla Belcher said.

And not just because of the music, she and others added. While the swinging rhythm of jazz is different than anything they’ve performed in marching or concert band, the nature of the group is what really sets it apart, they said.

On their last day of practice, the ensemble was working on “Kansas City.” As they whirled through sections of it, all it took was a couple runs through a solo here, a quick look at a chromatic run there, a moment or two to hash out dynamics to get everything shaped up.

“It’s not that we’re trying to rush, they just soak up so much so fast,” Cline said. “It’s actually hard to provide enough material for them.”

While a regular concert band might have a 6-10 pieces prepared each semester, directors said, the jazz ensemble learned about two dozen in that same time. In addition, the ensemble played eight gigs over its first semester. Regular concert bands typically do one or two, they said.

“They know we can handle a real challenge,” Belcher said. “I love it.”

And perhaps because of that shared hunger to learn, the students share something else, too. Like their directors, they may come from different schools, but they’re becoming increasingly connected.

Outside the classroom, the jazz students often get together to go to the movies or out to eat. The ladies regularly sleepover at someone’s house before performances. Pinto gets groups together to go to concerts.

“They almost gravitate to the ones from other schools. It’s pretty cool,” Warburton said.

In fact, students in all of their music programs have now taken to cheering for each other at games and events. During a state-level performance evaluation, SSHS even agreed to switch time slots with WSHS because the other school couldn’t get to the venue that early.

“They’re looking after each other,” Smith said. “You can’t put a value on that.”

After seeing their students grow so quickly both musically and as a community, the four instructors hope they can do it again. And not just with jazz. If all continues to go well, they hope to put together some other All-County groups, such as a chorus or string ensemble.

“In other places those programs are normal,” Warburton said. “We want to make them normal here.”

That probably means they’ve got their work cut out for them. But like their students, the four directors don’t have any qualms about working after hours.

“If we can get the support, we’ll keep rolling,” Smith said.