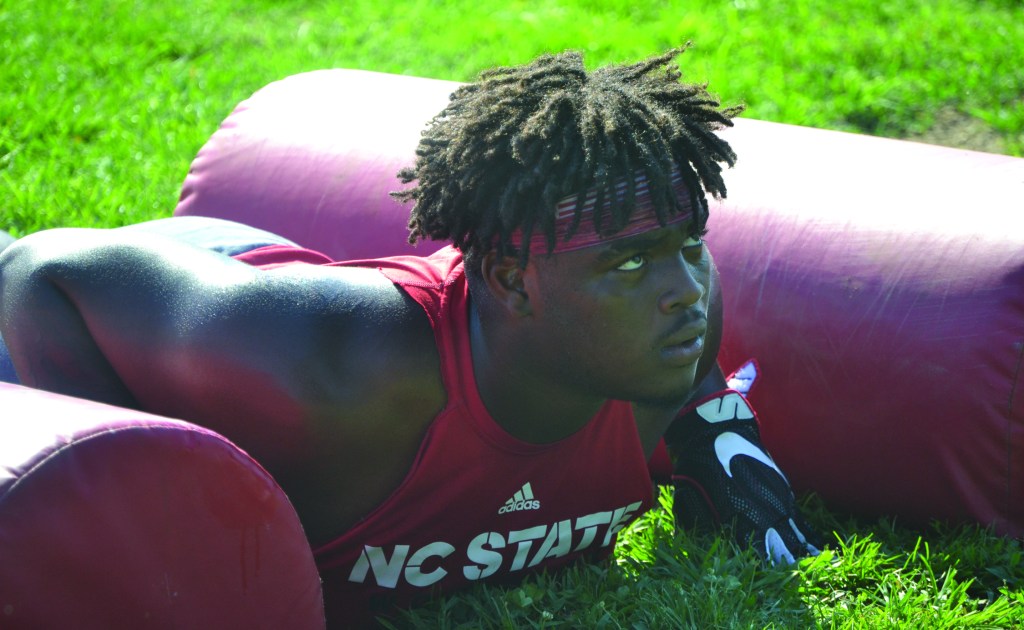 The collegiate courtship of North Stanly’s defensive tackle C.J. Clark appears to be over with the football standout choosing N.C. State Wolfpack over a slew of Division 1 powerhouses.

Instead of the Comets powder blue Clark wore a red N.C. State T-shirt at Tuesday’s workout on the North Stanly campus as the team prepares to build on last year’s success. Clark decided to put the recruitment sweepstakes to rest before the season started. 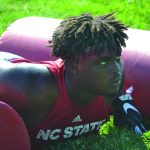 “I wanted to focus on my senior season,” Clark said.

It’s no secret Clark has been a highly-coveted football standout.  Virtually every college football program in the state wanted him, not to mention most of the teams in the Atlantic Coast Conference and half of the powerful Southeastern Conference including Alabama and Georgia.

North Carolina’s Larry Fedora did the same thing when the Comets played at North Moore last year so the Tar Heels’ head coach could watch Clark in action.

So why the Wolfpack?

“I really liked the coaching staff and how they prepare their defensive tackles,” said Clark, adding N.C. State was among the programs that first showed interest.

Look no further than the 2018 National Football League draft as proof N.C. State develops its defensive front. Bradley Chubb, defensive end for the Wolfpack, was drafted at No. 5 in the first round. Defensive tackle B.J. Hill was selected in the third round with the 69th pick. Kentavious Street, the Pack’s other defensive end, went in the fourth round.

Incidentally, Hill and Clark are cousins. No doubt Hill, a former standout at West Stanly before starring at State, shared his insight of the Wolfpack program.

There’s nothing like watching a cousin get drafted in the NFL’s third round to stoke one’s motivation about where football might lead.

At 17 years old, young enough to still be growing, Clark stands about 6 feet 4 inches and weighs 300 pounds. Not only is Clark big, but he’s quick. 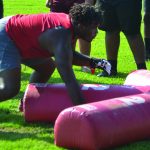 “His feet are crazy fast,” added Brandon Whitley, defensive line coach for the Comets. “And he’s starting to put his hands with it, too.”

“He’s quicker than he is fast,” Crisco said.

But Clark wants to be even quicker afoot.

A significant part of Clark’s progress has been his maturation, which has benefitted from good timing.

As a freshman Clark played linebacker.

“We knew at the next level he’d be on the defensive line,” Crisco said.

Coaches persuaded Clark to make the switch to defensive tackle where he’d have a more impactful future.

“He fought us for a while,” Crisco said. “He still likes to drop back.”

As soon as he moved to the natural spot for a burly player, colleges quickly took notice and started calling.

The sudden and overwhelming attention caught Clark’s eye, too. He also realized Comets coaches were right about the defensive move.

And Clark knew a life-changing opportunity lay ahead.

“It’s been fun to watch him mature,” Crisco said. “He bought into our system early.”

As a freshman Clark was not always serious about his play. At times he was lazy both on the field and in the classroom, Crisco said.

But, that’s all changed. Clark plans on graduating high school early so he can enroll at N.C. State in January and get a head start on academics while becoming entrenched with its football program.

Having played linebacker gave Clark a better understanding of defense. By the way, Clark still wears No. 52, a jersey number typically assigned to linebackers, not defensive tackles.

Just like having played basketball for the Comets and throwing shot put for the school’s track and field team, the athletic experience paid dividends for Clark’s football career.

However, Clark acknowledges there’s room for improvement in his game.

“I can make more contact with the guy in front of me,” Clark said of being more physical with blockers.

His frequent use of the swim move, combined with his quickness and strength, enables him to better corral ball carriers.

But, this year coaches expect Clark will see more double, even triple, teams.

It happened in North Stanly’s second round playoff loss to Murphy last season. Add constant misdirection schemes and Clark admits he struggled in the game.

Clark and his North Stanly teammates are approaching this season as unfinished business.

With Clark’s recruitment now out of the way, he and the team can focus on more accomplishments over last year.

The Comets finished the 2017 regular season at 10-2, the first time the program posted a 10-win season. North Stanly also notched a perfect 7-0 record in conference play, another program first.

Eight starters are returning on a stellar defense, along with six on offense.

North Stanly has also reaped the fruit of a few gifted transfers.

An inexperienced offensive line, however, poses the team’s greatest challenge.

Success is often contagious. More players than ever are coming out for North Stanly football. Between winning and the excitement surrounding Clark, like powerhouse college coaches landing in helicopters, players are hitting the gridiron amid hopes they, too, might be the next standout worthy of recruitment.

Now that Clark has decided on a college team, he’s ready to finish his high school career on a strong note.

“He was lucky because he got attention early,” Crisco said of Clark’s college suitors.

Just a couple of weeks away from practice, coaches are ready to see all of Clark’s hard work peak. They’re looking for his senior season to be one of leadership.

Clark tends to be the team clown, keeping players loose with joking banter.

On game day, however, he’s all business.

“When the lights come on Friday night there’s nothing funny about him. He’s the real deal,” Crisco said.