Somewhere along the line, I had missed this one. 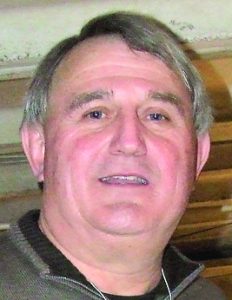 I’ve always been interested in anything involving Stanly County — its towns, its institutions, its land and its people.
So, it’s embarrassing for me to admit that prior to a few weeks ago, I knew nothing of the history and legacy of W. Horace Carter.
When SNAP Editor B.J. Drye sent me a text asking me to cover a Historical Society program, I was glad to do so. And when he told me that Rusty Carter, the son of Horace who grew up in the Endy community and won a Pulitzer Prize for his stand against the KKK, would be speaking about his late father, my curiosity was sufficiently piqued.
So, I checked out a number of articles on the Endy native-turned newspaper editor and collected the basics of who Mr. Carter was and why the Stanly County Historical Society would see fit to feature him as the subject of a presentation at its annual banquet.
But upon viewing the documentary “The Editor and The Dragon — Horace Carter Fights the Klan” at the banquet, I realized that before then I had no real appreciation of what this man accomplished.
Racial segregation was the norm in 1950 in Tabor City, North Carolina. President Truman’s 1948 order to desegregate the United States Armed Services started a movement toward desegregation in other institutions as well.
Meanwhile, the Ku Klux Klan, which had been in existence since the 1800s, mobilized to oppose desegregation by whatever means were necessary … legal or illegal.
When Horace Carter saw many of his fellow Tabor City businessmen don KKK garb at a parade on July 22, 1950, he could have easily decided not to rock the boat.
After all, many of the businesses these men represented were also advertisers in his newspaper.
But Horace Carter did not accept the status quo. He did not accept that a country that promotes freedom and democracy in the rest of the world should deny basic human rights to its own citizens simply because of their skin color.
And he was willing to persevere through opposition, persecution and isolation to bring about needed change.
And in a nutshell, that is the legacy of W. Horace Carter.
But to truly appreciate this home grown hero, “The Editor and the Dragon — Horace Carter Fights the Klan” is required viewing.
It is a 56-minute documentary that, while inspirational in its recognition of Carter and what he and his family endured, is equally depressing in its brutally accurate account of the blatant racism that was once commonplace.
The documentary can be viewed online at: https://video.unctv.org/video/unc-tv-presents-editor-and-dragon/ .

Toby Thorpe is a contributing writer to The Stanly News & Press.