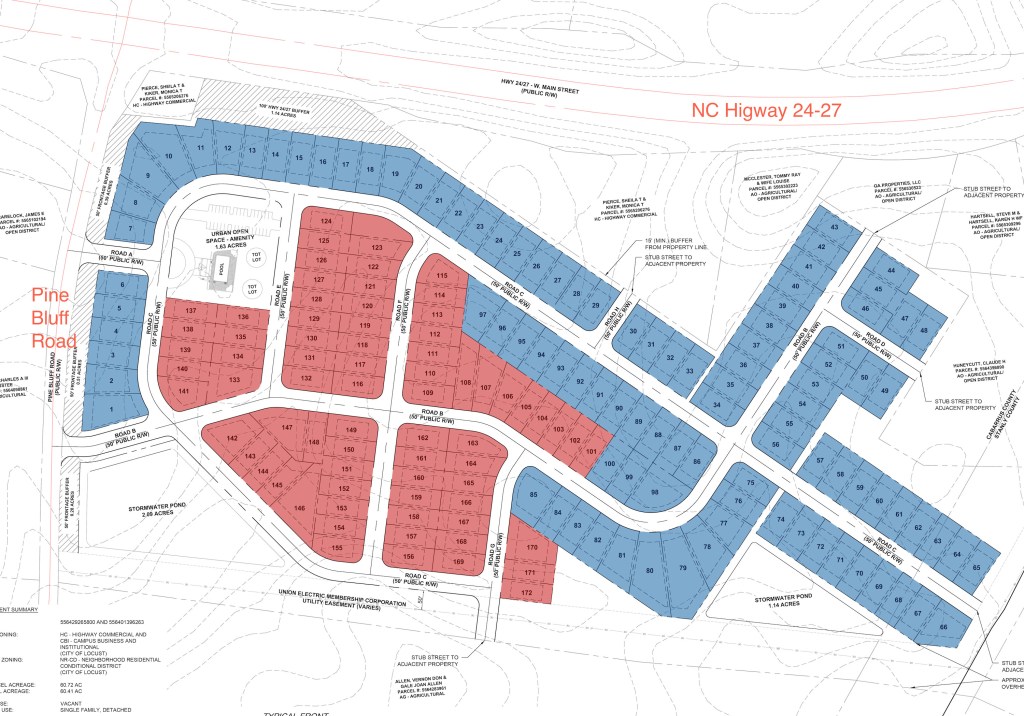 Preliminary plans for a new subdivision proposed in Locust at the intersection of N.C. Highway 24-27 and Pine Bluff Road.

A major subdivision could be on its way to Locust.

Meritage Homes — a developer with about seven projects under its belt in the Charlotte area — has proposed to build 172 houses at the west end of the city. The 61-acre development would go up along Pine Bluff Road, just south of N.C. Highway 24-27 on the Cabarrus County side of Locust.

While that means Stanly County wouldn’t get any of the property taxes from the new development, commissioners have agreed to provide water services there, city staff said. (Locust would provide sewer.) Residents there would have to pay a higher rate for that, which would both expand the county’s utility customer base and set it up for additional sales tax income as residents drive east to go to Wal-Mart and the other stores on Locust’s Stanly side.

As for schools, any young children in the subdivision would attend Cabarrus’ Bethel Elementary, staff added.

However, currently zoned as a highway commercial zone, Meritage needs to get the property rezoned to neighborhood residential before it can move ahead with development. And councilors have been cautious about that before.

Over the past several years, a number of companies have proposed developments there, staff detailed. However, none were willing to adjust their plans enough to meet city standards, particularly when it came to lot sizes and the quality of building materials. Meritage Homes, however, purposefully worked its plans around the city’s requests, going through three or four versions of their site plan to get it to what it is now.

“This is a project we’ve been working on for quite some time,” City Administrator Cesar Correa said.

Each of the $250,000-$275,000 homes would sit on a 50- to 60-foot wide lot and have some kind of brick or stone worked into their front facade. Former developers always wanted the lots to be smaller and use cheaper facade materials, staff noted, which was a big sticking point for the city.

“This is the literally first thing you’re going to see when you drive into Locust (from Charlotte),” City Planning Director Scott Efird said. “We take a lot of pride in the golf course, in the Wal-Mart area that it looks nice. We want this to look nice coming in, too.”

Meritage also laid out the subdivision to meet other city requests.

No cul-de-sacs were included in the street plans, which would make it easier for emergency vehicles to navigate the neighborhood. There were two entrances penciled in to ease traffic on Pine Bluff Road, sidewalks on both sides of every street, and an amenity center with a pool and two playgrounds near the neighborhood’s entrance.

“The group we’re working with understands the project needs to be a good fit for the city, and we believe that this plan it’s a win-win for both city and developer,” Correa said.

Meritage plans to sell and build the houses in the new subdivision as well as develop them, councilors added, which means they’d be working with the same group from start to finish.

“Here you’ve got one point of contact from start to finish,” Councilor Harry Fletcher said. “I appreciate that.”

However, councilors still had their hesitations. With such a large development, some felt there should be more recreational areas. Currently plans have the pool and playgrounds concentrated in one place, so the rest of the neighborhood has little public space to break it up.

“I’m not against what they’re doing, I just know kids,” Councilman Larry Baucom said. “They’re going to run around somewhere.”

That was a major reason the city has insisted on sidewalks throughout the neighborhood, staff said. Hopefully that would give families a place to walk or ride bikes without being in the street. There is also a power easement in that area that could possibly be turned into a recreational area, Efird added.

As for other concerns, they mostly involved traffic.

Despite having two entrances, the new subdivision will greatly increase the number of cars on Pine Bluff Road, and all of them will have to make left turns into the neighborhood.

However, as a state maintained road, any road improvements would have to be done by the N.C. Department of Transportation. And the developers can’t submit their plans to the state until the property they are considering is rezoned.

“This has to come first,” Councilman Roger Hypes said.

So in order to move forward, the city scheduled a public hearing for 7 p.m. Aug. 9 at City Hall. At that time, residents will have a chance to give their input on the new subdivision before councilors make a final decision on rezoning it.