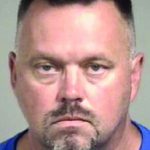 A man arrested by Cabarrus County Sheriff’s Office July 11 on charges of taking indecent liberties with a child once coached and taught in Stanly County.
Robert Stanley Enloe Jr. was charged with four counts of taking indecent liberties with a minor.
According to a press release from the Cabarrus Sheriff’s Office, a victim filed a report with the sheriff’s office on April 11 concerning alleged sex offenses that occurred between 1994 and 1995.
“When these offenses occurred the victim was a juvenile,” Sheriff Brad Riley said via release.
Enloe, 50, is a resident of Cabarrus County. The listed offenses happened when the victim was a student and Enloe was an employee with Cabarrus County Schools.
Enloe was being held in the Cabarrus County Detention Center under a $100,000 secured bond.
Enloe worked from Aug. 1, 2000 to June 11, 2008 with Stanly County Schools. He taught at South Stanly High from 2000 to the summer of 2007. He then taught at Endy and Oakboro elementary schools in the 2007-08 academic year.