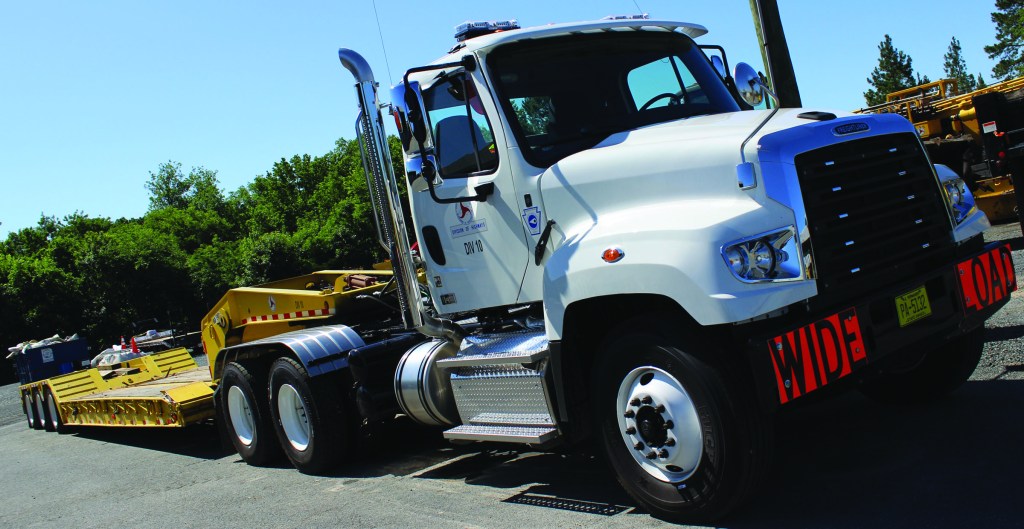 Jeff Foreman uses this truck to prepare for the Roadeo.

Jeff Foreman wrangled something a little bigger than cattle recently.
The low-boy driver from the N.C. Department of Transportation roped himself a first place trophy in Division 10’s Equipment “Roadeo” in Concord. 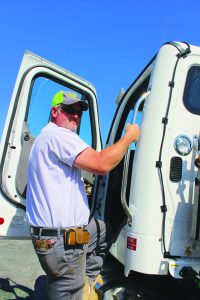 Jeff Foreman won the Division 10 Roadeo for the second time
recently. He now is preparing for the state competition, which is in August.

The friendly competition pits heavy equipment drivers from the division’s five counties (Stanly, Anson, Cabarrus, Mecklenburg and Union) against each other in a contest of safety and skill.
“Now he’ll go on to represent us in the state Roadeo in Raleigh,” said Richard Thompson, a safety consultant who helped oversee the event.
Overall, six kinds of equipment are showcased in the NCDOT Roadeos, which happen in every division across the state, he detailed. There’s Foreman’s speciality, low-boys (a low-bedded tractor trailer used to transport heavy equipment), as well as small dump trucks, large dump trucks, tractor-mowers and backhoes.
“We’re talking about some pretty massive vehicles here,” Thompson said. “To take something that big and maneuver it with precision, it takes real skill.”
And Foreman has proved himself pretty sharp when it comes to maneuvering his vehicle. Working with NCDOT Division 10 for about 16 years, he’s carried everything from cranes to mowers around on his low-boy. In fact, he also qualified for the state Roadeo in 2016.
“The competition is based on what we do every day, so I just try and focus on what I’m doing,” Foreman said.
For example, the tasks for his competition included backing a trailer as close to a loading dock as possible without touching the wall — something he does on a regular basis. 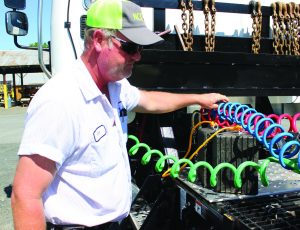 Foreman inspects his truck, the first component of a day’s work and the first part in the competition.

Others included weaving through a serpentine course without knocking over cones, pulling up as close to a stop line without crossing it, parallel parking the massive truck and trailer, and running the low-boy’s right side tires through a narrow channel lined with tennis balls perched on cans.
“I think I only knocked three over this last time,” Foreman said of the latter.
And when out on a narrow road, that ability to keep his trailer lined up along one side of a centerline could save someone else’s life, Thompson pointed out.
“That’s the whole idea behind (the Roadeo), to develop and improve those safety skills and develop some top-notch drivers,” Thompson said.
In fact, it’s literally safety first at every Roadeo event. The first part of each vehicle’s competition is an inspection race. Each driver is given five minutes to go through their daily inspection list and find 10 things that are wrong with his/her vehicle.
“Sometimes it could be a flat tire, sometimes it could be a light out, sometimes it could be a loose (cable),” Foreman said. “You’ve got to get through the whole thing.”
Until the engine is off and the door closed, there’s no celebrating a good run either. Judges take off points for any unsafe behavior.
“But overall it’s just a good time,” Foreman said.
Along with getting to know the other drivers and meet their families, he gets a chance to see how they do their work, he noted.
“I never fail to pick up a trick or two,” Foreman said.
And with the state competition coming up, he may need all the tricks he can get.
There will be a total of 14 divisions represented at the state Roadeo, Thompson said, so there will be plenty of good drivers to compete with. If Foreman makes it to the top of the pack, he’ll then be eligible for a national competition in Arkansas.
“We’re very excited to have someone from Stanly representing us out there,” Thompson said.