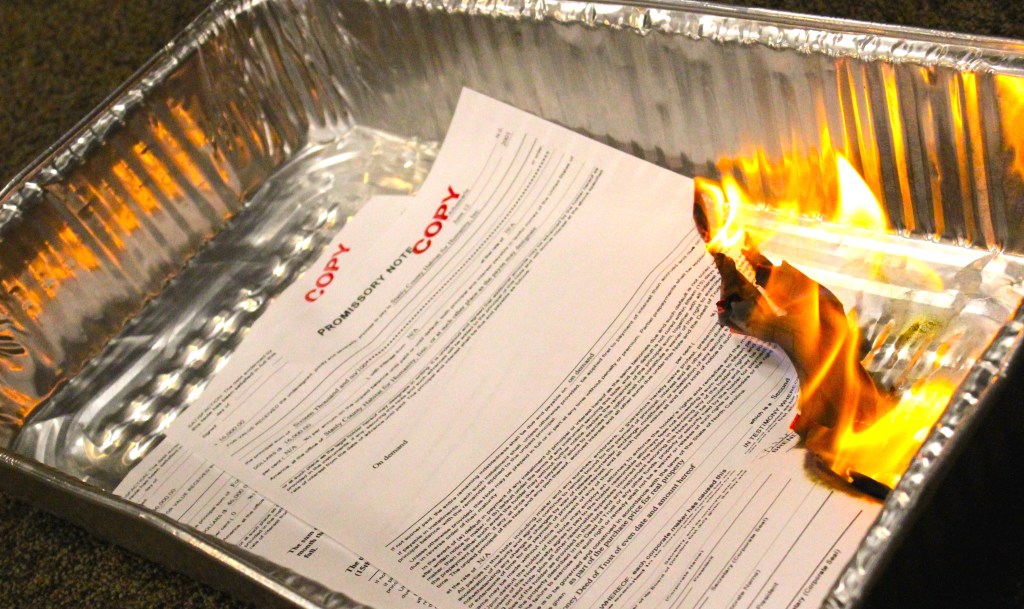 Brenda Richardson's mortgage with Habitat for Humanity burns away.

While bottle rockets and sparklers lit up many a face to begin the month, it was fireworks of another kind that lit up Brenda Richardson’s life.

Just before the Fourth of July celebrations, Richardson set fire to something far more satisfying than any explosion in the 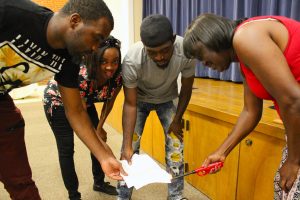 Richardson burns up her mortgage note with the help of her children (from left) Derreck, Lakeita and Zaquilleon.

sky: her mortgage paperwork. As a Habitat for Humanity homeowner, she got to literally burn her note at a special ceremony.

“It feels really good,” Richardson said, grinning like a kid as flames licked up the paper.

Contrary to what some people think, Habitat doesn’t just give away homes, director Cemita Gibbs explained. Its families sign a 30-year, no-interest mortgage when their home is constructed and are entirely responsible for paying it off.

For Richardson — whose home on Gaddy’s Ferry Road in Norwood was constructed in 2001 — that meant paying off $62,000 by 2031. By paying it off now, she actually got rid of her mortgage 13 years early, making her the 12th Habitat homeowner to burn their note in Stanly.

“It’s quite astounding,” Gibbs said, noting Richardson’s house was the 15th one constructed in the county.

“It’s moments like this that we truly need to celebrate,” Gibbs said. 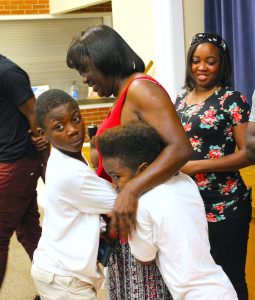 Richardson hugs her nephews in celebration.

So like any good fireworks display, there was a crowd there to watch, about 50 people from Richardson’s various families — regular family, work family, church family. And, of course, her Habitat family.

“That’s what you all are to me,” Richardson said to the Habitat staff before setting a lighter to her mortgage.

In fact, like everyone there, the folks from Habitat call Richardson “Speedy,” the nickname she got from her dad growing up. As she and her family came in, they hugged her kids, asked about her job at Curt’s Variety Store.

“Without all my families you see here, this never would have happened,” Richardson said.

She was a single mother of three living in her parents home when she was selected for a Habitat home, Richardson detailed. She’d applied to Habitat twice before, but didn’t have a solid enough job to secure a spot until her third application.

“I guess the third time was the charm,” Richardson said.

After getting accepted, she and her three kids — ages ranging 6-17 at the time — all pitched in to help with the construction, piecing together framework, putting up siding and painting walls every chance they got.

“I loved going out there,” said Richardson’s youngest, Zaquilleon, who was 6 at the time. “It was so much fun, doing everything.”

“I was just excited to have my own room,” said Lakeita, Richardson’s oldest.

Since construction, Lakeita, Zaquilleon and their other brother Derreck have formed some of their best memories there, they added. From their first Christmas at the new house to more recent visits with their own growing families, it remains at the center of all they do.

“It’s where we got to see Mom at her best,” Lakeita said.

Every month while they were growing up, the kids detailed, Richardson squeezed their budget to pay as much on the mortgage as possible. Even when she had a stroke and lost her job in 2009, she still managed to find a way to make her payments.

Now the mother of three, Lakeita said that inspires her to keep pushing forward.

“She’s the one who taught me to be strong,” Lakeita said.

As for Richardson, she insists she couldn’t have done it without the men and women at her note-burning ceremony.

From the sister who urged her to make extra payments, to the boss who hired her after her stroke, to the Habitat staff that gave her her the mortgage (and a lighter to burn it, too), she was glad she never stood alone.

“Thank you,” Richardson said. “To each and every one of you.”