LandTrust appeals to public for Save the Yadkin campaign 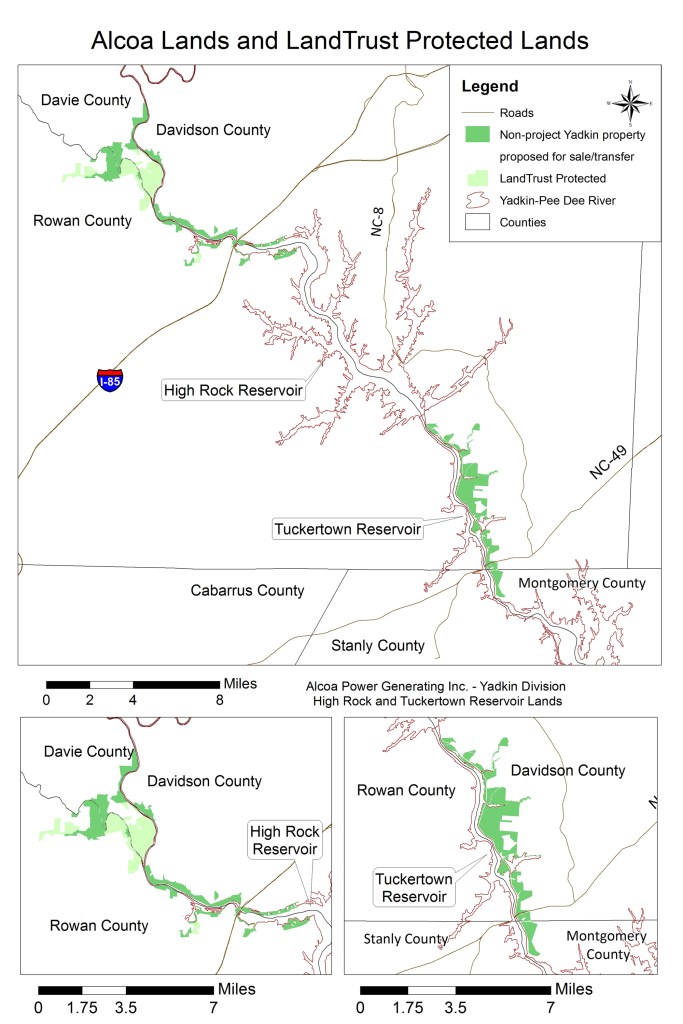 Stanly County hosted the first of three public meetings Tuesday night as the LandTrust for Central North Carolina launches its Save the Yadkin campaign.

The nonprofit announced the two-fold campaign earlier this month with a goal of buying 4,700 acres and 76 miles of shoreline owned by Aluminum Company of America (ALCOA). Part of a relicensing settlement agreement in 2007, the LandTrust is committed to preserving the property for public use on behalf of the N.C. Wildlife Resources Commission.

“Conservation is for everyone. It’s not a political issue,” Travis Morehead, executive director for the LandTrust, said at the meeting held at Stanly Commons.  “We’re committed to saving the Yadkin.”

For more than 30 years the Alcoa property has been available to the public in a variety of ways, including numerous recreational activities like gamelands for hunting, fishing, hiking, camping, rock climbing, etc. If the land is not preserved and thus made available for sale on the open market, much of that public availability could be lost to private development.

While it’s impossible to measure how much the public actually uses the Alcoa property designated for conservation, there are other ways to reflect its public value. For example, nearly 8.7 million people live within 100 miles of the center of the proposed acquisition including metro areas such as Charlotte, Winston-Salem and Greensboro. The LandTrust touts the property’s reach to 80 percent of the state’s population.

More than 1.7 million people use the waters of the Yadkin-Pee Dee River basin daily, for drinking water, industry, growing crops, generating power and the aforementioned recreation.

“If we are not successful in helping WRC acquire it from Alcoa, that public access will likely be lost,” said Crystal Cockman, land protection director for the LandTrust. “To lose that would be a terrible loss for North Carolina.

“The land also provides a buffer along the lakes with 76 miles of forested shoreline that filters water before it reaches the lakes, thus helping provide for clean water,” she added.

LandTrust must first purchase 2,310 acres along the Yadkin River, the South Yadkin River and High Rock Lake at a price of $7.7 million. A sum of $5.3 million has already been raised courtesy of the LandTrust and other partners. A needed balance of $2.4 million must be raised by September 2019 to buy the High Rock Lake portion or “the project turns into a pumpkin,” Morehead said.

Incidentally, the current fundraising effort is bolstered with a $500,000 “challenge grant,” or a matching grant.

Once the High Rock funding is complete then the attention turns toward the $8 million price for 2,390 acres on Tuckertown Lake. However, the High Rock purchase is a prerequisite before the pursuit of Tuckertown.

Like the High Rock effort, which was earmarked first because of earlier identified donors, the LandTrust has gotten a head start on the fundraising for the second phase. As much as half of the amount needed could be available. Much of that, however, is dependent on grants and remains unconfirmed at this time, Morehead said.

Officials believe once the proceeds are raised for High Rock the carry-over momentum will be enough to ensure the success of the second phase.

The price per acre for the conservation effort equates to $3,500 per acre, In comparison, an acre of property on High Rock Lake recently sold for $42,000, Morehead said.

“They can get a lot more on the open market,” he added.

It’s possible the High Rock portion could be conserved while a fundraising shortfall leaves Tuckertown vulnerable to development.

Of course, it’s also possible the High Rock fundraising effort could fail, too, leaving all of the property exposed to development.

The town of Badin and Stanly County has already benefited from the relicensing agreement when Alcoa gifted nearly 1,100 acres (5.7 miles of shoreline) in proximity of the Narrows and Falls reservoirs for the expansion of Morrow Mountain State Park.

To contribute to the Save the Yadkin project, contact the LandTrust at 704-647-0302 or donate online at https://landtrustcnc.org/alcoa-lands-conservation/.

To learn more about the conservation or about how to volunteer with the organization, contact Cockman at 704-647-0302 or crystal@landtrustcnc.org.

A general LandTrust membership begins at $35. A Three Rivers Society is the highest level of giving and begins at $1,000. Sportsman and youth memberships are available. Details regarding each membership can be found at https://landtrustcnc.org/ under the “Join” tab. 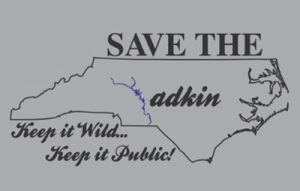 The LandTrust for Central North Carolina is preselling T-shirts that bear the image above for $20. Proceeds go toward a 4,700-acre and 76 miles of shoreline conservation project.

Also, the LandTrust is pre-selling Save the Yadkin T-shirts for $20 with proceeds going toward the conservation project. Shirts will be available the week of Aug. 13.

The LandTrust is holding a second meeting at 7 tonight at the Gateway Building – Food Lion, Board Room at 204 E. Innes St. in Salisbury.