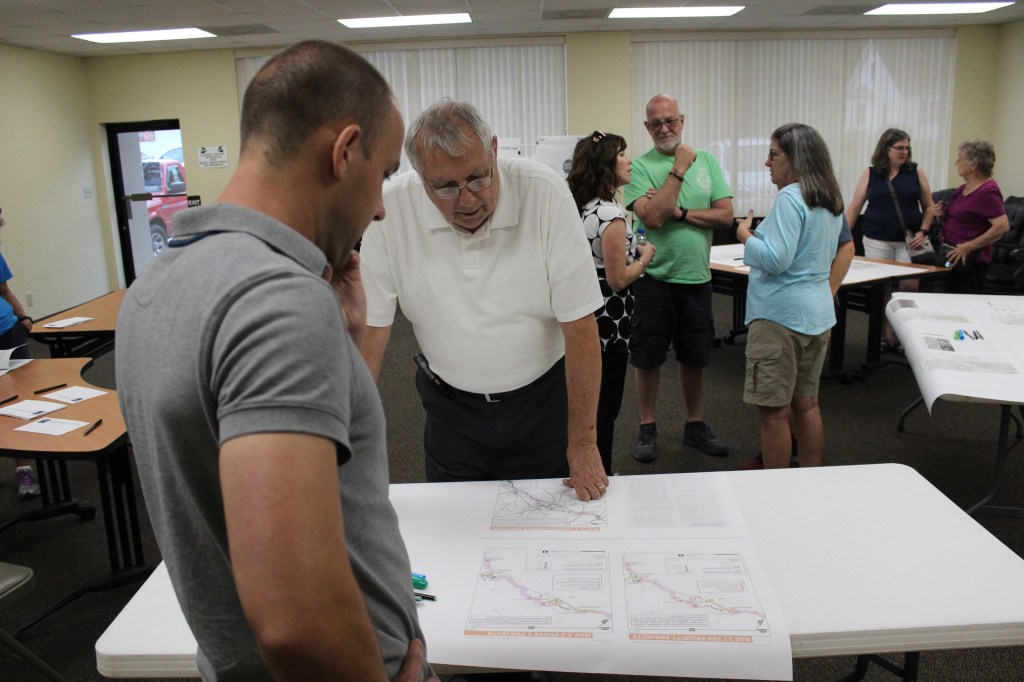 Recent efforts to encourage walking and biking in northern Stanly were supplemented by the state this week.

Through a $40,000 grant provided by the N.C. Department of Transportation, traffic engineers worked with New London, Richfield and Misenheimer over several months to create a bike and pedestrian plan for their entire area.

The first draft of the plan was completed this month and made its public debut on Tuesday at a public input session hosted in the New London Community Building. About a dozen people looked over the proposed improvements.

“I think it’s going to be a great resource,” said Michael Riemann, a local trail organizer who helped provide input on the plan.

The document includes pages of data and statistics on area roadways, as well as photos of current pedestrian conditions, an overview of best practices in other rural communities and dozens of designs for potential improvements.

Of those proposed designs, most revolved around expanding the Falcon Trail — a 2.7-mile trail that goes from Richfield to Misenheimer.

“It’s a huge resource for this area,” said Steve Bzomowski, senior planner for Alta Planning and Design, the contractors who created the bike/pedestrian plan. “You don’t see something like that in many communities of this size.”

Because of that, they suggested that northern Stanly’s top bike/pedestrian priority should be extending the Falcon Trail both north and south.

The community has grant funding from the Carolina Thread Trail to do so. Volunteers are using it to acquire easements and land for a trail from Richfield to New London. From there they also hope to continue the trail to North Stanly High School.

“We’ve made some good progress recently,” said Riemann, noting that they have about a year to utilize the CTT grant. “We’re hopeful we’ll have everything lined up by then.”

A $12,500 engineering study provided by the village of Misenheimer could also help the trail continue north to Cabarrus County. In order to go north, the trail needs to cross the railroad that runs along U.S. Highway 52; the study would provide designs for that.

“That’s what I’m excited about,” said John Michael Kimner at the meeting.

A middle school student who has family in New London, he loves to mountain bike. In fact, he’s traveled the current stretch of the Falcon Trail several times. But by extending the trail, he thinks there would be more opportunities to go biking with his family.

“That would be a lot of fun,” Kimner said.

Plans also call for putting in connectors along the Falcon Trail to places such as the Food Lion shopping center in Richfield, Clearview Apartments in Misenheimer or neighborhoods along Gold Street in New London.

“Connecting those commercial areas, especially to Food Lion, would make a big difference,” said Thelda Riemann. “Get people walking to stores and such.”

Not all improvements are trail related though. Many of the designs are centered around roadway improvements, such as safer highway crossings, the addition of new sidewalks and the restructuring of roads for bike lanes.

“There’d be a lot of ways for (my family) to ride and walk on the roads around town and still be safe,” said New London resident Catherine Kimner. “That’s what I’d like to see.”

However, while safety is their top priority, the plan’s designers hope their suggested improvements will do more than just that.

While countries in Europe have long structured their road systems with the pedestrian and cyclist in mind, the U.S. is only just getting into the game. In fact, N.C.’s lack of such infrastructure is the big reason NCDOT started providing grants for such plans.

“If we want to improve, it has to be a priority,” Bzomowski said. “And priorities often begin with policies.”

Which is where the bike/pedestrian plan comes in, he detailed. If the plan is approved, the technical designs and price estimates can be used to request NCDOT funds, apply for grants, organize fundraisers and coordinate budget planning with the other towns.

“It will get the ball rolling on all the logistics, so to speak,” Bzomowski said.

But before that, the plan must go through final editing and review.

After that process is done, Alta will make a final presentation to New London, Richfield and Misenheimer and then submit plans to the state.