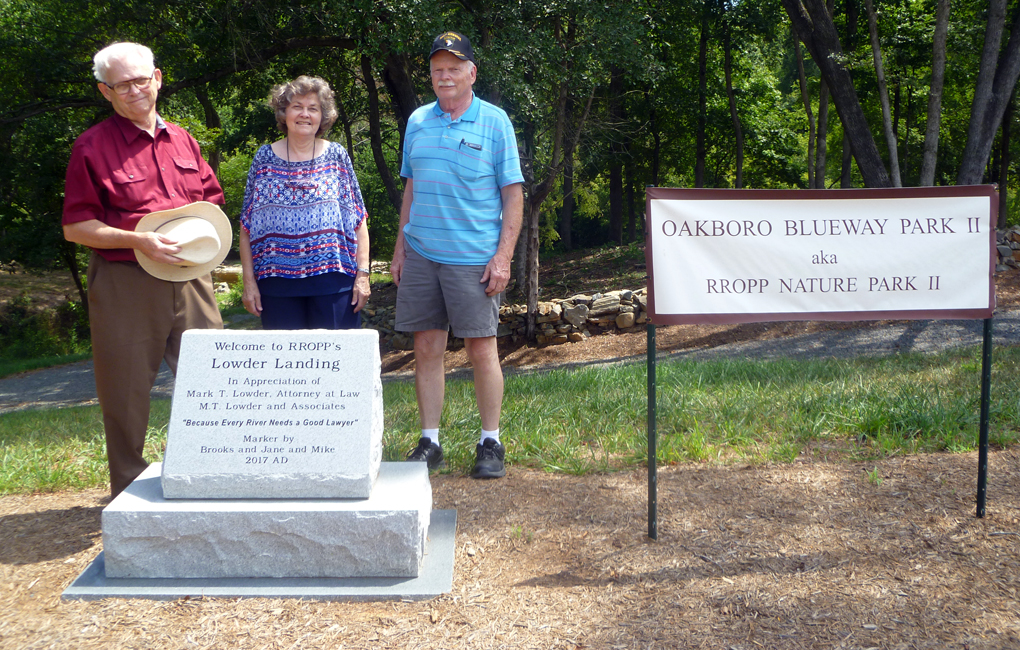 A proposed park picnic shelter drew in a complaint from the park’s developer and former owner during the Oakboro Town Council meeting on July 16.

Barnhardt developed the park over a period of two decades. He, his wife Jane, and their friend, Charles Mike McLain, run RROPP.

In 1996, he received non-profit status for RROPP. Two years later, RROPP made the first of several land purchases to expand the park. It opened on Dec. 31, 1999 and was sold to the town on June 6, 2016 — exactly 20 years after RROPP gained non-profit status. The park sold for $150,000, which Barnhardt said was a “bargain” since the park needed no major work.

He designed the park with a specific vision in mind, and sold it to Oakboro expecting the town to continue what he started. Visitors park in a gravel lot and can walk across an open field that looks down onto the river. Another open space is higher above the river.

Barnhardt planned for the park to be open to campers, including Boy Scouts and kayakers who may want to rest a night before continuing along the blueway. He also wanted the open area by the parking lot to remain free of structures, preserving an unobstructed view of the river and keeping the site open for weddings. (The park has hosted six weddings.)

When the town purchased the park, No Camping signs were installed. Josh Almond, director of Oakboro’s Parks and Recreation Department, said that while that ban is in place, Boy Scouts are allowed to camp in the park if they obtain prior permission from him.

“There are no plans for camping now, but there are some long-range plans we’ll take a look at,” Almond said, adding that the town wants to continue to improve the park and welcomes opinions from the public. “It’s a beautiful park with a lot to offer.”

Most recently, Barnhardt was upset when he saw stakes in the ground in the field by the parking lot where a picnic shelter will be built, saying the area should be free of structures.

“I think the conflict here is that the town voted and approved to put in an Eagle Scout project, and Brooks doesn’t share the same vision,” Almond said. “Brooks has done an amazing job with the parks that he’s got, but the park on (North Carolina Highway) 205 is the town of Oakboro’s and this is something that has been approved and the town is going to put in.”

During the council meeting earlier this month, Barnhardt protested the installation of the structure, volunteering to pay for the project himself if the council would vote to move it to the higher ground.

The council made no comment on the topic during the meeting, and no action was taken.

Almond said the picnic shelter will not detract from the view of the river.

“It’s an open picnic shelter,” he said. “There will be a roof and picnic tables underneath it to give shelter from the sun and elements. It will be completely open. You can walk through it and see through it. It’s not going to be that big.”

Almond said the higher area Barnhardt suggested is largely used as a camping space for the Boy Scouts.

“It’s kind of a trek to get up there,” he said. “When they went into this shelter project and started thinking about it, the part that gets used is the part by the parking lot and that’s where people put in kayaks. To put in a shelter anywhere else wouldn’t make much sense. That’s the logical place. They’re not going to the top of the hill. It wouldn’t serve a purpose on that.”

Barnhardt used the money from the sale of the park to purchase and develop a second park, Oakboro Blueway Park II, which opened in May. While he has plans to perfect the second park, he still wants to improve on the first one.

Barnhardt pointed to the boat ramp, constructed of wood and gravel, which he said ended up washing out. He plans to add a concrete ramp in that same site, possibly this fall if the water level is low enough. Part of the park holds the site of the former Coble Mill, which burned down decades ago. Traces of the structure still remain; while it’s not recognizable as a mill, Barnhardt believes it should be preserved. He wants to create a five-person committee to oversee it, and has three members, including himself, selected.

“There’s a lot of things that need to be decided,” Barnhardt said. “It would take a lot of pressure off the parks department.”

Almond said no projects in the park other than the picnic shelter have been approved, and that the town will not appoint a park committee since it is already overseen by the parks and recreation department.

“I’m still a little new, and there’s some stuff I’d like to see done, but it has to be discussed and approved,” Almond said.

The mill site is also protected, he said.

“It’s known that it’s down there,” Almond said. “There’s no plans to do anything to disrupt that or to take away from that. It is understood that it’s down there. There’s not really a reason we can see at this point to have a committee. We think having a department to handle that is fine, with the knowledge we have of what to do.”

While no one can move forward with park projects without permission, Almond did welcome ideas and assistance.

“The town appreciates all of the work Brooks has put in to make the park what it is,” he said. “We’re excited about what it has to offer going forward.”

While the park is owned by the town, a donor wall installed by RROPP prior to the sale still benefits the organization. Any sales proceeds made through donation plaques will go to RROPP rather than the town.

RROPP owns a second blueway park within the Oakboro town limits. Barnhardt is currently unsure whether he will sell that park.

Both parks are part of the Carolina Thread Trail, an organization that connects communities with land and water trails within a 15-county region. The trails connect towns and counties and are designed to boost participation in outdoor recreation and increase local ecotourism.

The Rocky River Blueway starts at Pharr Mill Family Preserve. The Oakboro blueway parks both sit along the Rocky River.