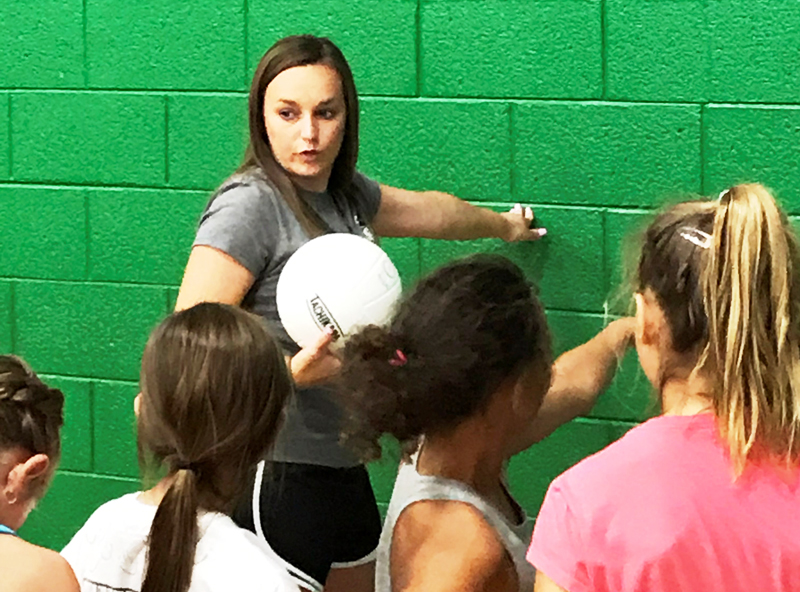 LaRhonda Watkins, volleyball coach at West Stanly High School, believes the sport can teach lessons more important than bump-set-spike, and her West Stanly Volleyball Camp is a primary means by which she is able to make this happen.
“We want our players to be skilled on the court, and active in the community as well,” she said. “We want to build all-around players.”
And the annual camp, underway in early July in the WSHS gym, doubles as an opportunity for local girls of elementary and middle school ages to learn the game and build skills, while inspiring her varsity team members to give back to the community as camp instructors and mentors.
The 2018 camp, directed by Watkins and her assistant coach, Steffi Dutton, attracted 52 registrants, split roughly half and half between beginner (grades 3-5) and advanced level (grades 6-8).
“Beginner level instruction is ‘bare basics’,” said Watkins. “We work with the youngsters to teach the right way to serve, pass and hit. At the advanced level, we expect the players to already know the basic skills, and we try to fine-tune those.” 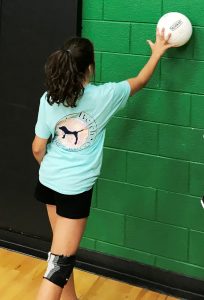 Although 52 campers may seem to be a large number, the camp has attracted even more interest in the past.
“Our numbers are lower this year for some reason,” said Watkins, but she was quick to point out that the decline is not necessarily a bad thing.
“With these numbers, we can offer a lot more individual coaching,” she said, noting varsity players serving as instructors can partner with one or two campers to increase the quality and quantity of the training provided.
And, Watkins adds, the time her players spend with their camper-partners builds a sense of responsibility.
“They (the players) accept much of the responsibility for making sure the campers learn the skills well,” she said.
Watkins’ passion for having her players serve in the community was recognized during the 2017-18 school year as her team was awarded the NCHSAA Commissioner’s Cup, an award based on community service, which included a $1,000 stipend to the team.
The team identified needs within the community, created a plan to meet the need and submitted a video to explain how the team served and the impact of the project on the community. Visit https://www. youtube.com/watch?v=_UTL1VOloXI to view the video.
Some members of the current Colt volleyball squad got their start in the camp several years ago, and by experiencing the camp from both the participant and instructional side, Watkins hopes the lessons learned will contribute to building well-rounded young ladies.
“We were out here yesterday with the team members setting up for today,” she said. “As campers, they were able to just come out and take part. Now they are able to experience what goes on behind the scenes, and learn the importance of giving back and not taking the opportunity to do so for granted.”