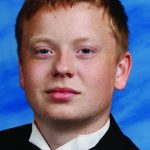 He is the son of Tim and Kathy Barbee of Locust and the grandson of Frances and the late Dan Pearman of Darlington, South Carolina and Everett and Rachel Barbee Hudson of Albemarle.
He plans to attend NC State University, majoring in Animal Science and Veterinary Medicine.
He was also awarded the John Phillip Sousa Band award. This is the highest band award in high school.
Sam attends Locust First Baptist Church where he serves as an usher and is active in the youth group.
Samuel has a sister at UNCC and a brother in the U.S. Marines.
Many in his family have served in the various branches of the military. His great-grandfather was a disabled American veteran of World War I, and another grandfather served in World War II and the Korean War.