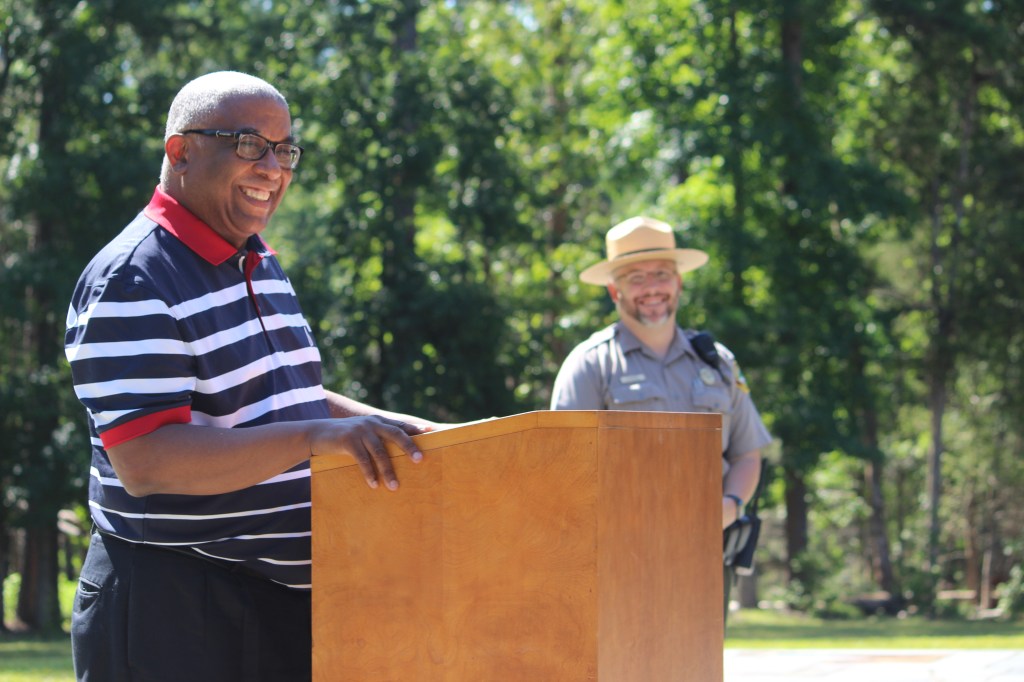 Morrow Mountain State Park officially opened 45 new acres of land along the south side of Mountain Creek at a ribbon cutting ceremony on Thursday.

“This is arguably the most scenic section of creek we have in the park,” said the park’s superintendent Jeff Davidson at the event. 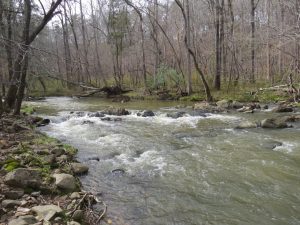 The pristine waters that run along 3,000 feet of the property swirl around large boulders and beneath a canopy of unique hardwoods, he detailed. Both the forest and the creek are home to rare wildlife like the Carolina Creekshell (a freshwater mussel) and the Timber Rattlesnake.

“Once again, it was only possible [with] the enthusiasm of this community,” Davidson said.

The property was acquired through a partnership of the Landtrust of Central North Carolina and Ron and Nancy Bryant. About three years ago, they explained, the land went up for sale, but the park did not have enough money to purchase it.

“Which was a little scary,” said Ron Bryant. “As long as it was on the market, anyone could go in there and build who knows what.”

As the former president of a land trust in Charlotte, Ron sympathized with the dilemna. In fact, a desire to preserve private woodlands is what spurred he and Nancy to grant an easement to the Landtrust of Central N.C. when they moved to Stanly County years before.

So when they heard about the situation along Mountain Creek, they decided to step in. Using profits they had made renovating low-income housing in the Charlotte area, they purchased the land and held onto it for about three years until the state could gather enough funds to purchase it. 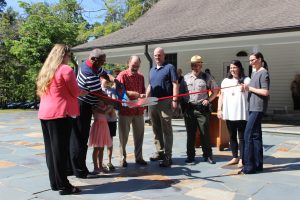 “We are just so excited to be a part of this celebration,” said Michael Fulk of the LandTrust of Central N.C. “This is actually the second land transfer in the past few years that we’re really proud of.”

Back in August 2016, they also worked with the Speight family to transfer five acres at the top of Biles Mountain to the park. The property features a globally rare mountain bog that is home to a variety of frogs, toads and salamanders.

Combined with the Bryant land transfer, that brings the park up to 4,972 acres.

“We’ve always had so much support from the people here,” Davidson said.

In fact, Morrow Mountain State Park was created through mostly private efforts. Back in the early 1930s, 1,800 acres were secured through land donations and volunteer fundraising to form what would be North Carolina’s third state park.

“We have to have good solid parks, both safe and local, so children can come here and have a safe, educational experience,” said N.C. State Parks Director Dwayne Patterson, who was present for the ribbon cutting. “I want when they come to have that memorable experience… where they become lifelong commitments to the outdoors.”

To further that kind of work at Morrow Mountain State Park, the state legislature also approved extra funding for special projects last year. A state bond will also boost funding within a couple of years. Davidson said they are planning to restore old stonework, repair old buildings replace a washed out fishing pier and construct more cabins with that funding.

One day, they may also look into purchasing more land on the south side of Mountain Creek so that the entire area there will be protected.

“We’re always excited to see that land preserved for the next generation,” Davidson said.