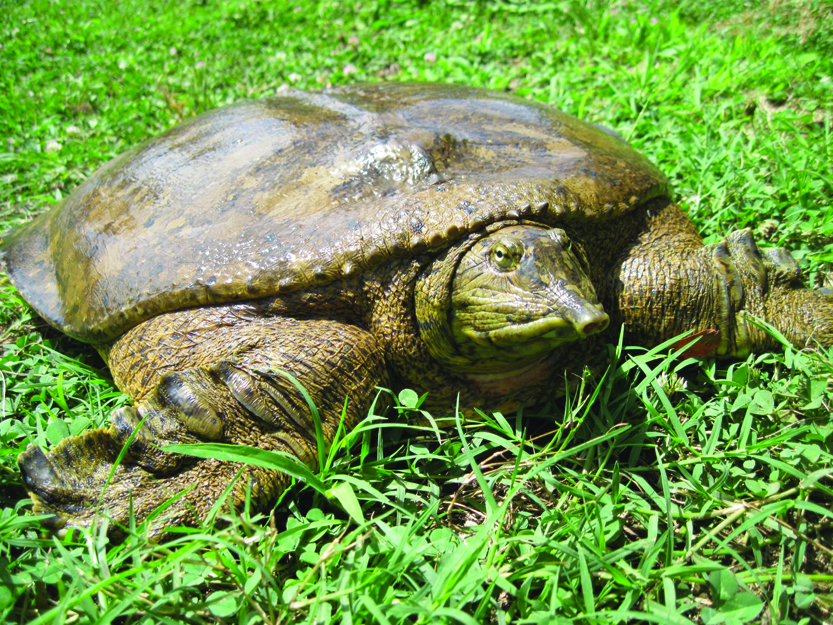 I used to watch a television show when I was small with these interesting creatures called “Snorks.”

They lived in the undersea world of Snorkland and had snorkels on their heads that they used to move through the water.

Unless you were alive in that time period, you probably haven’t heard of Snorks, but you’ve undoubtedly heard of their sister Hanna Barbara cartoon, the Smurfs.

While the Snorks never rose to the same level of fame as the Smurfs, I remember watching them fondly as a part of my childhood.

As the story goes on the show, very few humans believe in the existence of Snorks.

While these are just imaginary figures, there is a real life creature nearby that I saw for the first time a few years ago that reminds me of the Snorks. That is the Gulf Coast Spiny Softshell turtle (Apalone spinifera aspera).

These turtles are not commonly found in the Piedmont, and I first saw them in the Rocky River in Stanly County. They are found along the Gulf of Mexico from North Carolina to Mississippi.

The most distinctive feature they have is a long upward pointed nose, much like a Snork. They are able to breathe underwater for extended periods of time. They are flat like a pancake compared to other native turtles.

Their carapace and plastron (top and bottom of their shell) are covered with skin with a sandpaper-like texture. Their coloring is from olive-gray to yellowish brown. They may have spots on their back.

They inhabit freshwater such as rivers, lakes, marshes, and ponds. Though I’ve only seen them in the Rocky River, I know of other people who have found them in the Uwharrie River, as well, in Montgomery County.

Spiny softshell turtles are carnivores, and eat mostly fish, crayfish and aquatic insects. They often bury themselves in sand and mud and ambush their prey when it comes close.

They become sexually mature at 8-10 years of age. Males will put on a courtship dance by waving their feet and extending their neck. They build their nests in sandy raised areas close to water. They generally lay 12-18 round eggs in early summer. Young emerge about 80 days later and are very small – only 1-1.5 inches in diameter.

A number of years ago, my friend who is a herpetologist at the N.C. Zoo was looking for a spiny softshell turtle to put on exhibit.

I had let the manager at Pee Dee National Wildlife Refuge know that was the case, and he found a huge spiny softshell turtle near Brown Creek that he was remarkably able to run down and catch — they move fast on land.

As it turns out, this was the largest documented Gulf Coast spiny softshell turtle in the state. She was much too large for the zoo to keep in an exhibit. So we measured her and documented her size then let her go.

Keep your eye out for these interesting turtles the next time you are kayaking or boating in the Rocky or Pee Dee rivers.

They spend most of their time in the water, so you’re not likely to see them on the banks, but with their flat shape they are easy to spot floating in the water.

This is another interesting creature that calls Stanly County its home.

Crystal Cockman is land protection director for The LandTrust for Central North Carolina, of which Stanly is part.