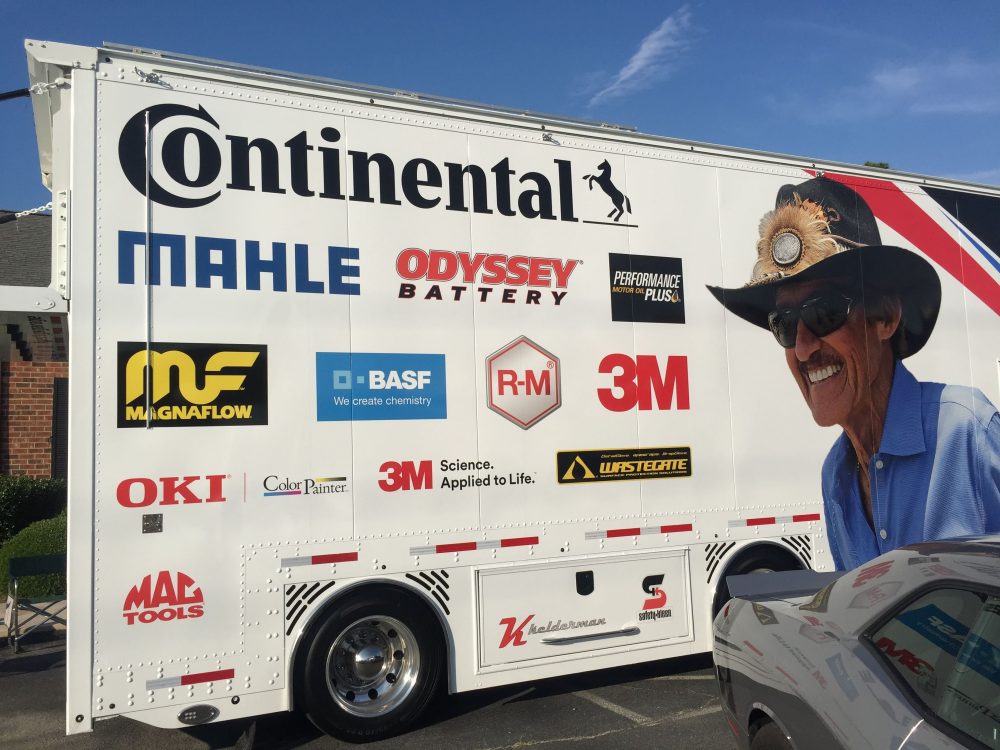 The Petty’s Garage car hauler rolled into Oakboro Friday for the town’s cruise-in. Although on the team’s radar for several years, this was the first time the team was able to visit Oakboro, but officials say it may not be the last. (Photo by Jesse Deal). 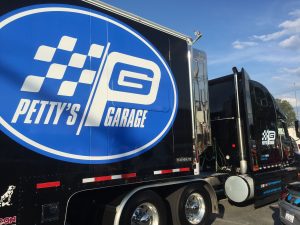 Sixteen years after its inception, the Oakboro Cruise-In — the largest of its kind in North Carolina — is still going strong.

Held on the fourth Friday of every month, it is known for hosting hundreds of classic antique cars, thousands of spectators and a thunderous “burnout” event after sunset.

On Friday, a new attraction was introduced to the downtown crowd: an appearance by the Petty’s Garage team.

A handful of representatives from NASCAR legend Richard Petty’s speed shop arrived in town around 4 p.m., equipped with a hauler holding three of their prized car creations. The garage, founded a decade ago in Level Cross — about 10 miles south of Greensboro, is in the same vicinity of where Petty and his father began racing in 1949.

“Richard has a motto: ‘You dream it, and we’ll build it,’ ” said Transportation Manager Timothy Harrison. “We do a full nut-and-bolt restoration and then we build 800-horsepower Ford Mustangs, 725-horsepower Chevrolet Camaros and 1,000- horsepower Dodge Challengers.” 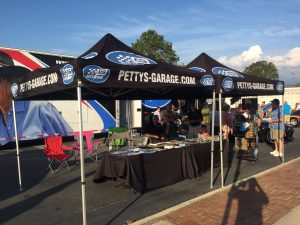 All three of those cars were on full display Friday, as onlookers continuously walked around the parking lot to marvel at their engine displays.

Harrison said that particular Camaro would soon be going to Las Vegas to be sold in an auction, with all the profits going to Paralyzed Veterans of America.

That isn’t the only charity that Petty’s Garage is associated with. Prior to the crew’s trip to Oakboro and Petty’s trip to Pennsylvania to watch Sunday’s Pocono race, the 81-year-old appeared at the shop to autograph a large selection of merchandise — all of which was available to purchase Friday, with full proceeds going to Victory Junction Gang Camp.

Created in 2004 by Kyle Petty, in honor of his son Adam who died in a NASCAR race 18 years ago, the Randleman-based nonprofit organization has served thousands of chronically ill children over the years at no cost to their families.

“We do a lot of specialty builds for Victory Junction,” Harrison said. “That’s an awesome place that really brings families so much joy.”
According to Petty’s Garage OEM Sales Manager Matt Crump, the team has wanted to appear at the cruise-in for years now, but with a loaded calendar of around 50 shows a year, it has struggled to find the time. 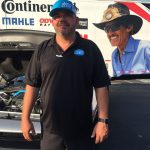 Timothy Harrison is the transportation manager for Petty’s Garage.

“We’re about 60 miles up the road and we travel all across the United States. We had an off-weekend so we decided we were going to ride to Oakboro. We’ve been talking about it but never did it because of our busy schedules,” Crump said. “We’re having a great time — a lot of cars and a lot of good people. We look forward to coming back in the near future.”

The garage crew wasn’t the only attraction Friday night. Along with the usual bevy of muscle cars and local vendors was live music by The Gamblers Band, as well as the annual appearance by the Hornets Nest Region Antique Automobile Club of America, a 60,000-person group with more than 50 members in the Charlotte area.

The next Oakboro Cruise-In will take place Aug. 24.