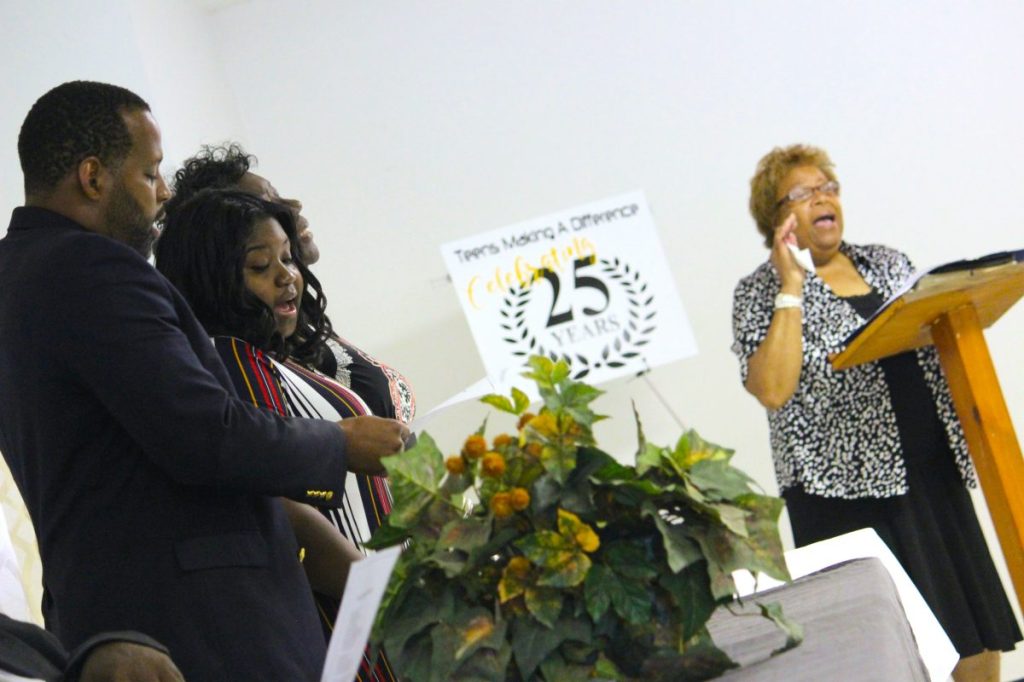 Eric Jackson, Mikayla Williams and others join Deloris Chambers in a song at the Teens Making a Difference 25th anniversary celebration. (Photo by SHANNON BEAMON/staff) 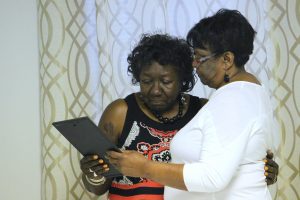 Valerie Legrand, left, is presented with a resolution of appreciation by Valerie Tyson in honor of her late husband Johnny Yogi Legrand.
(Photo by SHANNON BEAMON/staff)

It’s not easy talking to teenagers. Advice seems to roll off like water. Questions seem to sink like stones. In fact, outside of school and family, there aren’t many who bother to make the attempt.

“Unless you live around here,” said Eric Jackson.

Raised in west Badin, he said everyone constantly talked to him as a teenager. Checking in about school, or sports, or jobs. Whether family or not.

“There was this positive push from everywhere,” Jackson said. 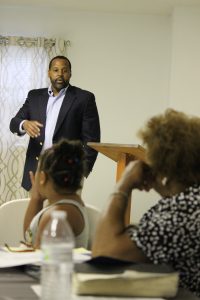 Eric Jackson — a member of Teens Making a Difference who went on to teach and coach — points to group founder Deloris Chambers during his keynote speech. (Photo by SHANNON BEAMON/staff)

And a group called Teens Making a Difference played a big role in that.

Started by former Badin councilor Delores Chambers with the help of her sister Valerie Tyson, the west Badin organization has been hosting activities for teens in the Badin community for 25 years now. During that time, they’ve facilitated everything ranging from  lectures, to field trips, to basketball tournaments, to community clean-ups.

“Anything that gives us a chance to speak into their lives,” Chambers said.

In order to celebrate 25 years of making those kinds of opportunities, about 30 former members, current members and community supporters gathered at Shiloh Baptist Church for reunion ceremony and banquet this past weekend.

Along with a talk from Jackson — who went on  to graduate from Pfieffer and work as a teacher after his time with the Teens — the night included music, prayer, a pair of special recognitions and the presentation of a scholarship.

“It’s hard to believe how much has happened since we started,” Chambers said.

She was first inspired to create the group back in 1993, she noted. While at home praying, she felt a call to “make a difference” hit her hard.

“Holy Spirit didn’t tell me how, just to do it,” Chambers said.

Valerie Legrand, left, is presented with a resolution of appreciation by Valerie Tyson in honor of her late husband Johnny Yogi Legrand.
(Photo by SHANNON BEAMON/staff)

That year she jumped at two major opportunities to do that: first, running for Badin Town Council; second, going door to door to rally support for a youth development group.

“I’d seen what was happening in our schools,” Chambers said. “Our youth face so much negativity. They needed people who can keep encouraging them.”

So with the support of many parents, Teens Making a Difference launched it’s first lecture series the same year Chambers was elected to town council. The monthly talks took place at the Church of the Living God and featured speakers from across the community like a member of the Health Department, a fire fighter, someone from the unemployment office to go over resumes, someone from EMS to teach CPR.

Even after the church closed, they continued  meeting for discussions at Chambers’ own house. There members talked through their thoughts on tough issues like racism and bullying and drugs.

It wasn’t just talk for long before the Teens started giving back, too, by picking up trash and putting on basketball tournament fundraisers.

“There’s always one thing or another going on,” said current teen member Alisha Allen. “And everyone’s always encouraging you not to give up.”

In fact, the biggest benefit of the group is not so much the events themselves as much as the atmosphere they create, Jackson argued. Teens Making a Difference brings together as many parents and community members as it does teenagers, so the adults get to know each others kids. Talk to them.

“It’s that constant encouragement,” Jackson said. “We talk about being committed, about being responsible, but that’s not something you’re born with. It takes other people to build it into you.”

And as long as the Teens can keep the community talking, there should be no shortage of that.

Honoring the Past, Building the Future

At the Teens Making a Difference reunion, officials presented the families of Johnny Yogi Legrand and Freeman Eddy Williams — men whose contributions added to the welfare of the west Badin community — with resolutions of appreciation. They also presented a $500 academic scholarship to Mikayla Williams, a student from North Stanly High School who plans to attend UNC Wilmington this fall. The scholarship is a joint gift from both the Teens and Better Badin, who matches what the Teens raise in scholarship money up to $250.