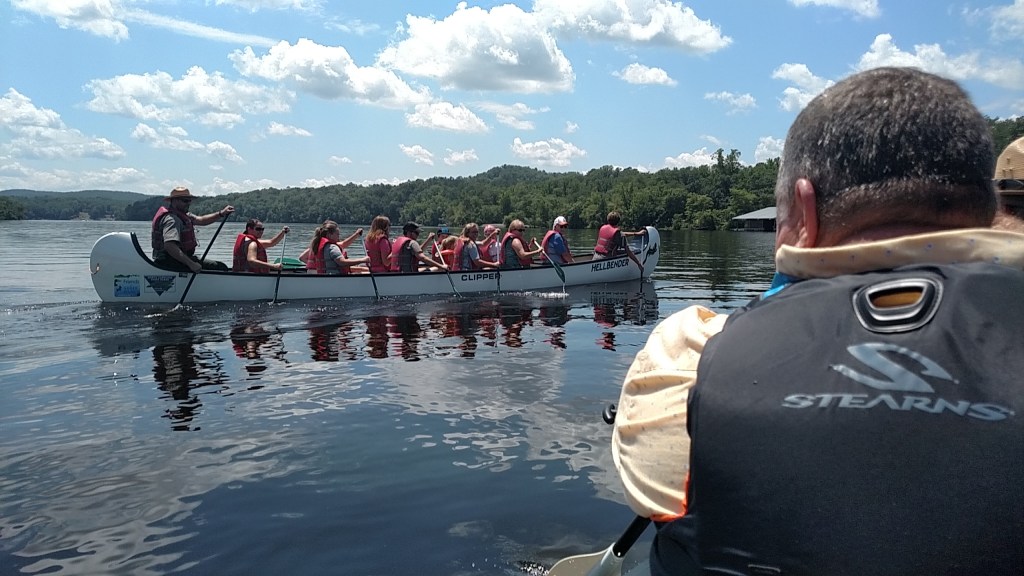 Canoes are typically the little guys out on Lake Tillery. Between bass boats, and motorboats, and giant pontoon boats, most everything outsizes them.

Up until last week, that is.

At a special ceremony at Morrow Mountain State Park on July 26, the N.C. State Parks department launched two “big canoes” onto the lake for the first time. Measuring 29.5 feet long and seating about 14 adults, the massive paddle-craft dwarfed even some of the motor boats out on the water.

“I didn’t know anyone made canoes that big,” said park ranger Ryan Swikle.

There aren’t many companies that do. In fact, the newly minted canoes had to be ordered from British Columbia. Swikle and Park Superintendent Jeff Davidson flew to Seattle, Washington and then drove to a factory in Canada to pick up the new acquisitions last month.

Along the 3,000-mile journey back, the two men stopped at as many national parks as they could, drumming up hype 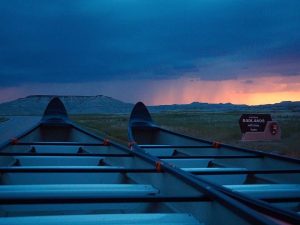 A photo taken of the big canoes at Badlands National Parks.

about the big canoes by posting pictures of their journey on social media under the hashtag “bigcanoeadventure.”

Their campaign — which featured pictures of the canoes crossing mountain vistas, pulling into Yellowstone National Park, squishing down crowded alleyways in St. Louis, and even picking up a western sasquatch to take home to Morrow Mountain — garnered thousands of views and comments, including a top photo with 377 likes.

“Yep, these canoes traveled a lot of roads,” said Swinkle at last week’s ceremony. “But this is actually their first time in the water.”

To commemorate that maiden voyage, several leaders from the N.C. State Parks Department — including director Dwayne 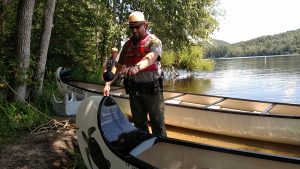 Patterson — and about 30 members of the public came out to Morrow Mountain State Park. After a Cheerwine toast, the two boats were officially dubbed “Hellbender” and “Loggerhead” and then loaded up with passengers for their first trip across the waves.

However, while they may be on their first trip across N.C. waters, the canoes aren’t the first big canoes the N.C. waters have seen.

“We have nearly 3,000 years of big canoe culture in N.C.,” Sean Higgins, the head of education for N.C. State Parks, said.

Native Americans started crafting canoes in the state hundreds of years before European settlers came, he noted. In fact, about 30 dugout canoes made by the Algonquin people were found sunken in Lake Phelps at Pettigrew State Park. The oldest is about 2,500 years old, the longest about 37 feet, just two feet shorter than the new canoes.

“Why did the Algonquin people need a really big canoe on Lake Phelps?” Higgins said. “There are a lot of theories.”

But perhaps one of the favorites is that they just thought it would be a lot of fun, he suggested.

The canoes will not be ending their journey at Morrow Mountain, either. 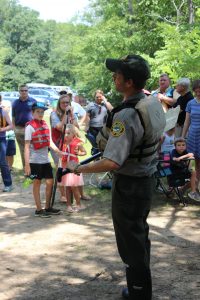 Sean Higgins shares the history of canoeing with people gathered for the maiden voyage of the “big canoes.”

Purchased by the Friends of N.C. State Parks, the Hellbender and the Loggerhead will be used throughout the state, traveling from park to park as part of a new educational program. In fact, the department will hire someone to travel that circuit specifically.

“The main reason for these things, more than anything, is to get kids out on the water,” said Higgins, who originally requested funding for the canoes. “I truly believe that the best antidotes for kids spending too much time indoors on video games are boats and bikes and fishing rods and tents. So we are really excited to get these out there.”

In about a month, the canoes will head out to visit a couple of state parks, including Merchant’s Millpond in northeastern North Carolina. Then after coming back to Morrow Mountain for Old Fashioned Day, they will prepare to head off for a longer circuit.

“I guess you could say, their real journey has just begun,” Swikle said.