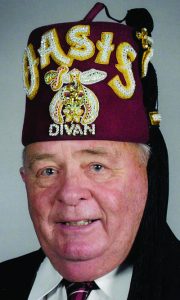 Rodney was born July 5, 1947 in Stanly County to the late Mack Craig “Preacher” Morgan and the late Eloise Mabry Morgan.

The family will receive friends from 6-8 p.m., Monday, August 6, 2018 at Hartsell Funeral Home of Albemarle. The funeral service will be on Tuesday at 1 p.m. at First Presbyterian Church in Albemarle and will be officiated by Rev. Elizabeth Ayscue. Burial will follow at Fairview Memorial Park.

Rodney was a United States Army veteran and retired from Alcoa. He was a longtime member of the Stanly County Rescue Squad. He had 25 years with the Albemarle Fire Department.

He was a member of First Presbyterian Church of Albemarle and had been a deacon.

Since 1990 Rodney was very active with the Oasis Shrine Temple. He served as president of the Stanly County Shrine Club. He was Captain of the Guard on the Oasis Divan. He loved his time with the Oasis Temple Hillbilly Parade Unit. He was a two time recipient of the Walt Disney Award, and also received the very first Doug Mayes Lifetime Achievement Award in 2016. He was a longtime chairman of the Oasis Shrine Circus. He was a faithful member of Albemarle #703 Masonic Lodge.

Hartsell Funeral Home of Albemarle is serving the Morgan family.
Online condolences may be made at www.hartsellfh.com.