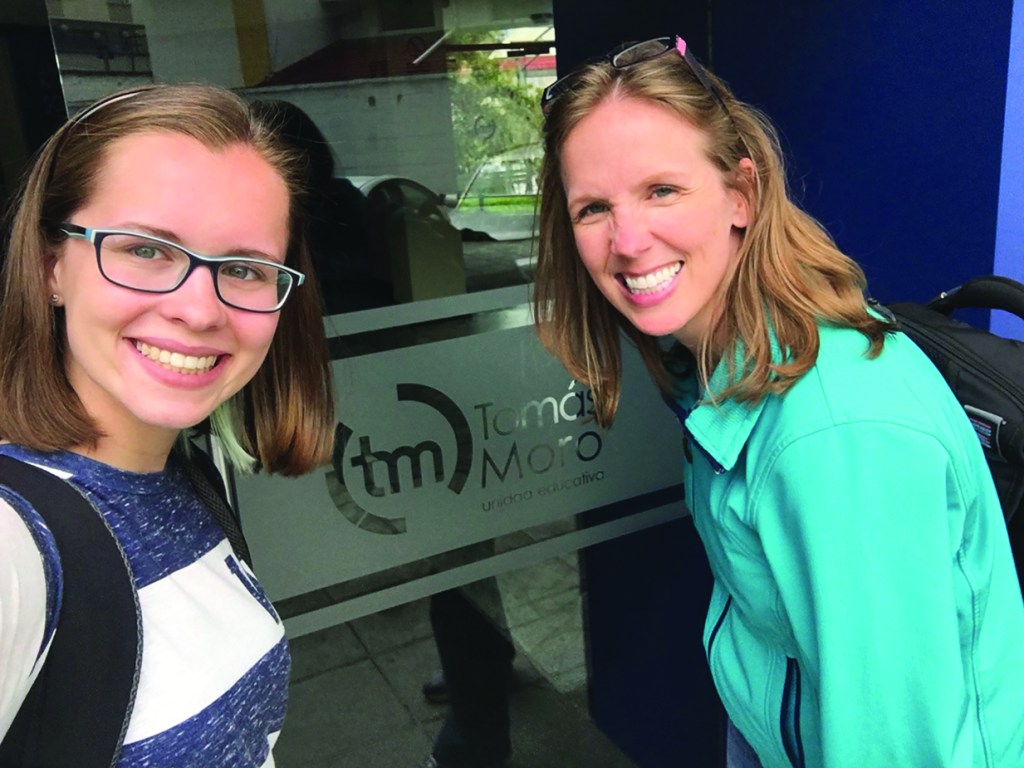 It’s a vexing paradox: As the world grows smaller and more connected, the language learning gap in the U.S. is growing.

To help tackle part of the problem, Melanie Keel, assistant education professor, and rising senior Leanne Mansfield headed to Ecuador this summer to see how children there learn English.

“In Ecuador, in some schools they start learning English in preschool,” Mansfield, an Albemarle resident, says. “It’s pretty advanced. On their high school diploma, they have the English certification.”

By contrast, only about a fourth of elementary schools in the United States offer any kind of language instruction beyond English. And many American schools struggle to serve students for whom English is a second language.

That’s one reason Keel is passionate about finding best practices to pass on to her students. She knows that many of them will wind up in classrooms in Union County, a district with a student population that is nearly 18 percent Hispanic.

“As these numbers progressively rise, teachers preparing to enter the education field need to know the most current strategies for teaching emergent bilinguals,” Keel wrote in her application for the Reeves Summer Research grant that is funding her work with Mansfield.

“The information learned through this research is relevant not only to students currently pursuing a teaching degree at Wingate University, but those in the area around us,” she continued.

Keel says dealing with two languages in the classroom adds not only complexity, but an opportunity to honor all cultures.

In Ecuador, as Keel and Mansfield observed classes, analyzed curriculum, took audio recordings and conducted interviews with teachers, they found a commitment to immersion techniques — during prescribed portions of the day, teachers were resolute about speaking only English — and a remarkably encouraging classroom environment.

“While they were doing presentations in English, their teacher was so validating,” Keel said. “The level of confidence she gave them stood out. We noticed how caring and culturally responsive the teachers were.”

She and Mansfield were amazed to see third-graders giving poster presentations on various countries, all in English.

“The environment they have created was one to support risk-takers, to help them see that this (mastering English) is not an overwhelming task,” Keel says.

She and Mansfield were taking some of their own risks, which they say made their research even more informative. Although Mansfield is earning a minor in Spanish and Keel knows some Spanish, neither are completely comfortable in the language.

“We felt awkward at times, because we couldn’t communicate,” Keel says. “But even that self-imposed fear makes you think of how difficult it is for children coming into a place where they don’t speak the language. Allowing yourself to feel that awkwardness while you are studying this is pretty powerful.”

A math major, Mansfield took two years of Spanish in high school. She says it was two Wingate study-abroad programs — a 10-day W’International experience in Ecuador and a three-week Spanish-immersion class in Costa Rica — that led her to pursue a minor in international studies and made her want to research language acquisition.

The summer project has led her to add a minor in educational studies and to consider a number of new career paths. She says she’s looked into TEFL (Teaching English as a Foreign Language) and TESOL (Teaching English to Speakers of a Second Language) certification, and she’s considering applying for a Fulbright English Teaching Assistant fellowship or serving a stint with the Peace Corps in Ecuador. 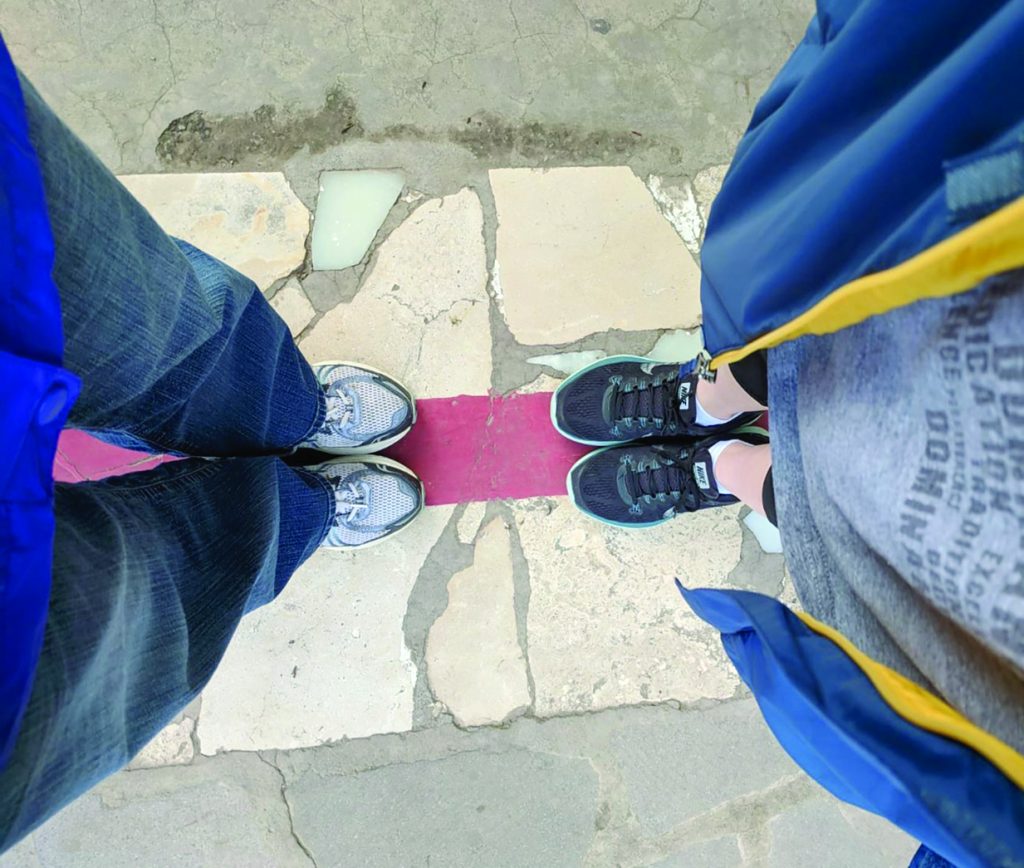 Albemarle resident Leanne Mansfield and Melanie Keel, assistant education professor at Wingate, traveled to Ecuador to view how children learn English. (Above) The pair stand on the equator.

Like any good research, the duo’s work has spurred more questions than answers, not the least of which is what terminology should be used to describe the students they observed in South America and the Hispanic students struggling with English here.

“Is it ESL (English as a Second Language), ELL (English Language Learners) or bilinguals or emergent bilinguals?” she says, explaining that how the students are viewed can influence how teachers approach their work.

“I think we should value bilingualism more. I wouldn’t call myself bilingual, but I am working on it,” says Mansfield, who has also added a level B2 diploma in Spanish to her to-do list.

“ESL teachers,” those instructors considered themselves “bilingual teachers.” The small shift in wording made her re-examine some of her own thinking about how local teachers should frame their lessons and use resources.

“For example, when we’ve had books that are written in Spanish and English, I have thought of them as valuable tools to be sent home, so parents who don’t know English can still read with the child,” Keel says. “Now, I’m realizing that regardless of whether the parent reads with them, the child needs to be reading that bilingual book. We want them to grow in Spanish and English at the same time.”

Mansfield says their observations in Ecuador, which were mostly in private schools but included a few days at a public school, proved Keel’s point.

“Some of the students had a difficult time with vocabulary because they are still learning Spanish vocabulary. We have to be patient with them,” she says. “In our quest to help them learn English as much as possible, as quick as possible, we have to remember that they still don’t know all of the words in their first language.”

How important is it to be bilingual?

Keel and Mansfield say another factor affecting how well students acquire a new language is how much the culture values bilingualism.

“There are different things at stake,” Keel says. “In the U.S., we don’t feel like students have to have a foreign language to be successful, but there it is truly valued.”

One of seven research teams to earn Reeves grants this summer, the two say the teachers and students they observed in Ecuador were also eager to learn from them. Mansfield met with high schoolers in an International Baccalaureate program and shared with them some of her techniques for learning a foreign language.

“My phone is in Spanish; I watch TV in Spanish,” she says. “Mainly, I just encouraged them to keep trying, to not be embarrassed to try, even if they get it wrong.”

She led younger students through a Bananagrams-style exercise in English and was impressed with their skills.

Now back at Wingate, Keel and Mansfield are analyzing their data, poring over field notes in which they captured hundreds of interactions in the classroom, to identify instructional strategies and examples of the culturally sustaining environment. They will then craft an inventory of best-practice strategies and tips on how they can be used in the classroom.

Although summer is almost over, the research will continue: As Mansfield begins work on her senior thesis as part of Wingate’s Honors Program, she and Keel will head into the Union County schools to observe a Spanish immersion program in action.