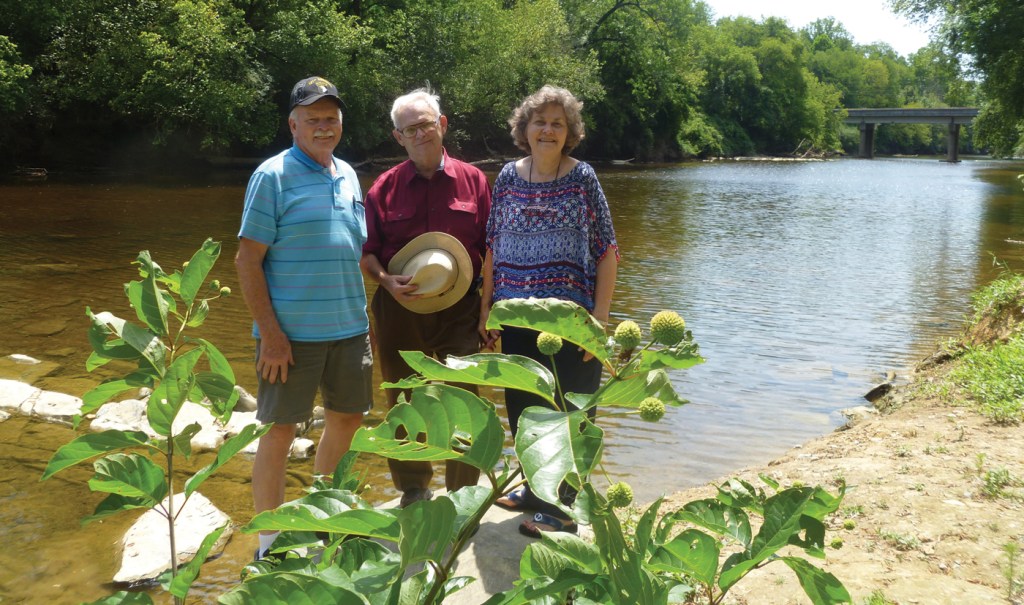 Photo by IMARI SCARBROUGH)(Charles ÒMikeÓ McLain and Brooks and Jane Barnhardt stand in front of the Rocky River, which flows by Oakboro Blueway Park II. The park is owned by the Rockey River Organization for Preservation and Protection.

Twenty years ago, work began on Oakboro’s first blueway park, designed to connect the tiny town to others along the Rocky River. Today, the same organization has created two blueway parks for the town — and it isn’t done yet.

While the park’s birth was technically 20 years ago when the first parcel of land for Oakboro Blueway Park I was purchased in 1998, the groundwork began earlier. 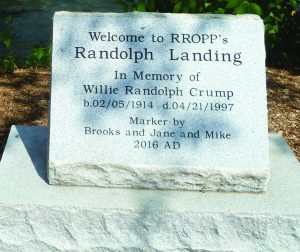 (Photos by IMARI SCARBROUGH) Blueway Park I has markings dedicated to various people who helped with the project or in tribute to individuals who enjoyed the scenery like the park presents.

RROPP purchased five separate parcels of land, four in Union County and one in Stanly County, in 1998, 1999, 2001 and 2006, according to Barnhardt. The small parcels, ranging from less than an acre to more six, totaled 15 acres. Most of the parcels were added to the park after it was opened.

The land was wild when it was purchased. Brooks, his wife Jane, and their friend Charles Mike McLain are the heart behind RROPP, spending long hours organizing and directing the efforts on top of clearing land. 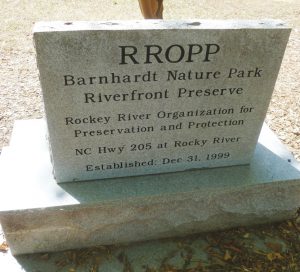 The park had five key projects, according to Barnhardt. They required moving a total of 225 loads of dirt, installing a 200-foot drainage pipe on Pleasant Hill Church Road, and adding a forked road to the park.

A parking area was created, signs posted, picnic benches added and more to complete the scene. A donor wall stands across from the parking area.

Although Barnhardt had further ideas for the park, he decided it was time for RROPP to sell it to the town of Oakboro. On June 6, 2016 the town purchased the park thanks to grants provided by the Carolina Thread Trail and Duke Energy.

Barnhardt thought he could likely sell the park for a higher price to another buyer, but decided to sell it “turn-key” to Oakboro for $150,000. He wanted the park to be ready-to-use and inexpensive so the town could afford it and have money leftover for work on it.

RROPP took the funds from the sale to build Oakboro Blueway Park II. The sale of the first park went through in June 2016, and by that fall the site of the second park was already being cleared. RROPP purchased the 6.85 acres on April 3, 2017, working with Millstone Grading to develop the park.

The park opened earlier this year on May 1 and is available for the public to use. In the meantime, RROPP is working on plans for additions to it. According to Barnhardt, the organization will add a small camping space, finish its donor wall and add concrete to a boat landing to Long Creek, among other plans.

While the first park is now the property of the town of Oakboro, RROPP still owns the second park. As of July, Barnhardt was unsure whether RROPP would sell or keep it.

Barnhardt, who will be 76 this month, grew up in Oakboro. He was in the Army until 1967, when he left and traveled the United States. He worked for the Forest Service, then a fire department, in California, finishing the last 15 years of his career as a fire captain.

When he retired, he moved back to Oakboro to be with Jane, who had long since decided she wanted to live in Oakboro.

He knew he wanted to give back to his hometown.

“I never forgot how I was raised,” he said. “You don’t forget where you came from. I said I would do something really worthwhile if I ever had the chance to, and what I chose to do was this.”

The parks aren’t simply recreation areas, but are designed for easy kayak and canoe access to help promote eco-tourism. They also complete what Barnhardt calls a “kiangle,” a triangle partially formed by the two parks.

Jane said that while RROPP has received a few small private donations, the bulk of the money used for the parks has been provided by the Barnhardts.

While Brooks has talked about certain aspects of the way the town manages the first park (he would like to see a park committee, partially staffed by himself, his wife and McLain, help oversee the park, and the washed-out boat ramp replaced, among other changes), he said he appreciates the support he has received.

“(Mayor) Doug Burgess was totally in support of Park I,” he said. “He was invaluable. It wouldn’t have existed, honestly, without him.”

He also credited Jane and McLain for their efforts on the projects.

Barnhardt noted the eight Eagle Scout projects that have been completed in the first park. From 2001 to 2015, eight Scouts finished a variety of projects, including planting trees, adding the canoe/kayak access ramp and creating a picnic ridge and trail, among others.

“I consider my debt to be repaid,” Barnhardt said.