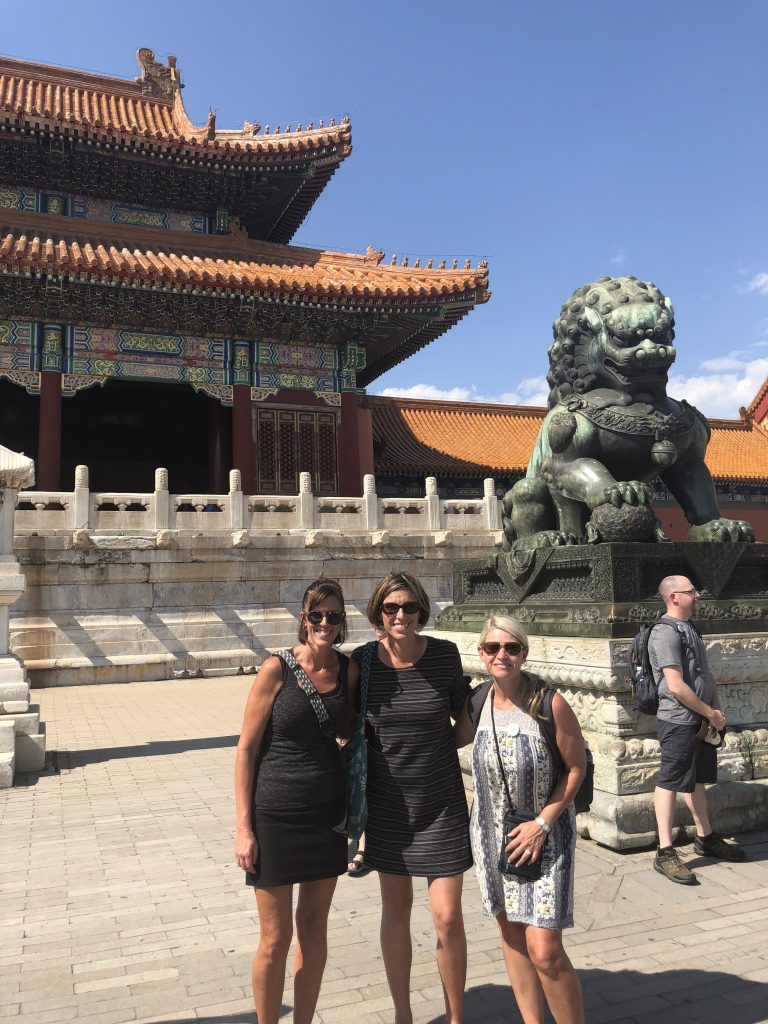 When Christi Edwards left for a teaching program in China this summer, she expected things to be different. Different language, different culture, different teaching styles. And as soon as she stepped off the plane, she could certainly see that at play. In the way people drove about crowded cities, for instance. The way toilets worked. Even how chicken nuggets came on a stick.

“There were so many little things that were not like home,” Edwards said. 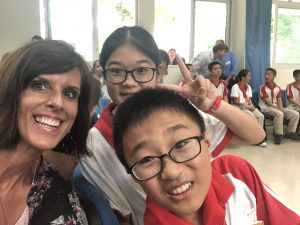 Christi Edwards gets to know some of the students at Taziba Middle School in Dujiangyan.

But when it came to the big things, China was surprisingly familiar. Whether visiting Beijing, Nanjing or Chengdu — the

three cities that were part of the Go Global program — Edwards found the hearts of the teachers, students and school administrators much like to those back in Stanly.

“I think that’s what I found most encouraging,” she said. “That we share so many of the same ideals.”

Overall, they got to see that across  seven different schools, she detailed, some high school level, some middle school level, and one elementary school level. At each, she and the other N.C. teachers in the group got to either observe classrooms, talk with teachers, or help with classes.

“So we got a pretty broad sampling of how things work there,” Edwards said.

Of course, that didn’t mean everything was the same. While touring the country — and even attending a Chinese school 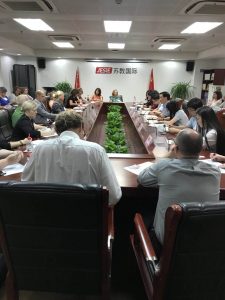 The teachers with the Go Global program meet with a Chinese school board to share insights.

For example, since many Chinese students travel long distances to get to school, boarding schools are far more common in their country. Students also take a two hour break in the middle of the day, so they can come back for the last half of classes rested.

Even more significantly, students are put on a specific educational tract much earlier than in the U.S. Depending on the results of a major exam, they are assigned to either a vocational or college tract by the beginning of high school.

“And the students themselves don’t have much say in that,” Edwards said. “If they want to go to college, they have to do well on the exam.”

But whether vocational or college-bound, the school system put an equal value on both tracts from what Edwards could see. Using tools like telecasting and other technology, the Chinese administration provided the same educational opportunities at both kinds of schools, she detailed.

“It’s like how we say not every kid needs to go to college, but we want every kid to have good opportunities,” Edwards said. “They want same thing we do: a fair chance for their students to succeed.”

Going into the classrooms, other similarities hid behind differences, too.

For example, China has a wide variety of foreign language schools students can attend. In those schools, teachers 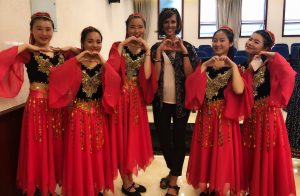 Students at a Chinese vocational school in Chengdu greet the Go Global teachers with a traditional dance.

constantly speak two languages. There is also a major push for cultural education in the country so nearly every student studies some kind of traditional art, whether that’s tea pouring, or playing a Chinese instrument, or performing traditional dances (which Edwards and the teachers got to witness for themselves at several schools.)

However, while the subjects may vary, the way the Chinese teachers handled them in much the same way the American teachers would, using the same kind of assignments and activities they use in their own classrooms. In fact, one Chinese teacher used discussion methods he learned directly from teachers in the U.S.

“They truly value our opinion in education,” Edwards said, remembering how teachers and teaching students alike would seek them out to ask questions. “Like us, they wanted to learn the best ways to help their students, they get excited about it… that’s something teachers can connect about across languages.”

But perhaps the biggest similarity of all, was the students themselves.

While perhaps more consistent about school work than American students, the Chinese students nevertheless got out of hand now and then, now and then. She saw teachers quieting classrooms, one student get his phone taken a way.

“Teenagers are teenagers wherever you go,” Edwards said.

And in the same way, students can touch one’s heart wherever one goes, too. While visiting a vocational high school in 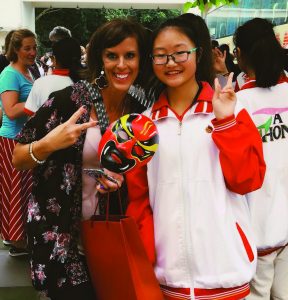 Christi Edwards, left, receives the gift of a mask from child named Emma during her trip to China.

Chengdu, Edwards was befriended by a girl named Emma. After spending several hours with her, Emma gifted her with a traditional Chinese mask.

“She told me, ‘Don’t leave,'” Edwards said. “There were definitely some tears after that one.”

Now that she’s back in the U.S., Edwards wants to help others see the similarities lurking under differences with China, too. Along with making a presentation to the Board of Education, Edwards hopes to make classroom visits to talk about her experiences.

Even more importantly, Edwards is maintaining contact with several schools, teachers and students in China. If possible, she wants to work with them on future projects — whether that’s teaching a virtual class for a Chinese school or getting American and Chinese students connected for video chats.

If possible, she’d also like to get other teachers connected with Go Global — the organization that helps N.C. teachers visit China — as well as the Hayes Foundation which sponsored her own trip to China.

“The best way for to learn is to find out out for yourself,” Edwards said. “I’m so grateful for my own chance to do that. I hope others can, too.”