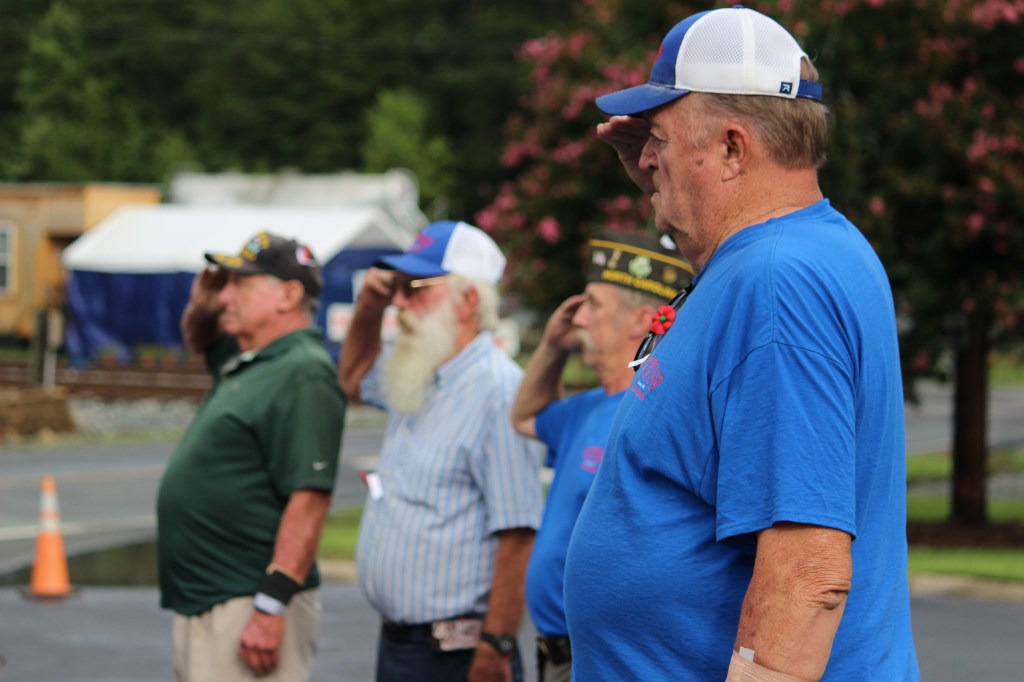 Retired Army sergeant Charles Connell offers a salute during the dedication of the Stanfield Veterans Memorial.

A permanent salute to veterans is now on display in Stanfield. 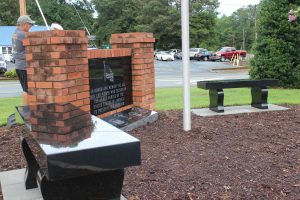 Dubbed the Stanfield Veterans Memorial, the pair of black granite benches and matching stone plaque now sit next to the flagpole at Log Barn Park. To commemorate the installation, about 30 people — including 10 veterans — gathered last Thursday for a special dedication.

“It’s something the town has wanted to do for a while,” said Town Administrator Bridgette Helms after the mayor prayed over the memorial and resident Elizabeth Hartsell sang the national anthem at the ceremony.

About a year ago, councilors began finalizing those plans, she detailed, setting aside about $4,400 in funding for the memorial. Along with the donation of a bench from Locust Monument, the town was able to secure the materials for it this summer.

Originally, councilors anticipated installing it by the historic barn that sits on the park, rather than near the entrance. But after some discussion, it was decided the memorial made more sense near the flagpole, both for sentimental and visibility reasons.

“We hope everyone in the community will come out and enjoy it,” Mayor Kevin Barbee said.

Charles Connell — a veteran of VFW Post 6365 who was at the ceremony — said he already enjoys it.

“I love it,” Connell said. “It feels good to see this in my hometown.”

Serving in the Army for 11 years — including time in Vietnam — the former sergeant first-class has seen many a tough sacrifice made for the U.S. His cousin, who also served in Vietnam, never returned home from the conflict. In addition, many of the men he served with didn’t return either.

One incident in particular sticks out in his mind. That day, an expedition of 127 men from his contingent went into the jungles of Vietnam. Only about 30 returned.

“That’s something I’ll never forget, seeing them come back,” Connell said. “That’s why it’s important (the memorial). Not for veterans like me, but for the people who didn’t make it home. To give them thanks.”

And in the western Stanly community, that sentiment seems to be on the rise, commented VFW 6365 Cmdr. Roberta “Bobbi” Sheets.

“When I first came here, it wasn’t like that,” said Sheets, who served 13 years in the Air Force — most of that as a loadmaster airdrop instructor. “The community wasn’t as engaged.”

Local VFW membership was low at the time and public recognition was sporadic, she said.

But between the Richfield Veterans Memorial, the Locust Veterans Memorial and a number of new ceremonies and events, the community’s efforts to engage local veterans has noticeably increased in the area, she attested.

In fact, their membership has doubled from 19 members to 38 members in the last three years, she added. About half of those members are under the age of 50. Because of that, their VFW group is looking to raise funds for a new post building, members noted at the ceremony.

“There’s a lot of vitality coming back in now,” Sheets said. “It’s great to see.”

And as the veterans finished a salute before the new memorial, community members seemed keen to take advantage of that atmosphere, walking up and shaking their hands.