A new candidate has emerged in the race for N.C. Senate District 33 after the previously filed Democrat challenger withdrew.

At a conference Saturday, the Democratic Party, with representatives from both Stanly and Rowan, voted to put forth Arin Wilhelm as its nominee to face incumbent Republican Carl Ford in November. Wilhelm’s approved candidacy follows the withdrawal of Geoffrey F. Hoy.

Wilhelm, of Granite Quarry, is a community engagement specialist for Cardinal Innovations Healthcare. In that capacity, he addresses such issues as opioid abuse, suicide prevention and mental health. Wilhelm touts 12 years experience in the fields of human services and mental health.

He wants to use the experience in the state legislature to combat many of the pressing problems in the district like the opioid crisis. For June, Stanly County ranked first per capita in opioid overdoses. 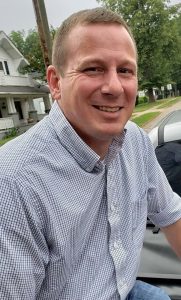 Married and a father of four, Wilhelm also claims to be an advocate for children, especially their education.

“We need to reduce the reliance on standardized testing while increasing teacher salaries significantly,” he said

“We should repeal common core and replace it with something that allows teachers more flexibility as children learn in different ways,” he added.

Prior to his employment with Cardinal, Wilhelm and his wife worked for more than seven years with neglected, abused and delinquent youth at Nazareth Children’s Home.

After the party submits Wilhelm’s name to the State Board of Elections, his name will replace Hoy’s on the ballot in the general election.

Norwood’s Bill Sorensen lost to Ford, of Rowan County, in the GOP primary.

District 33 is a new legislative district for Stanly County. It takes effect in January as Stanly then loses District 25, presently served by Sen. Tom McInnis.