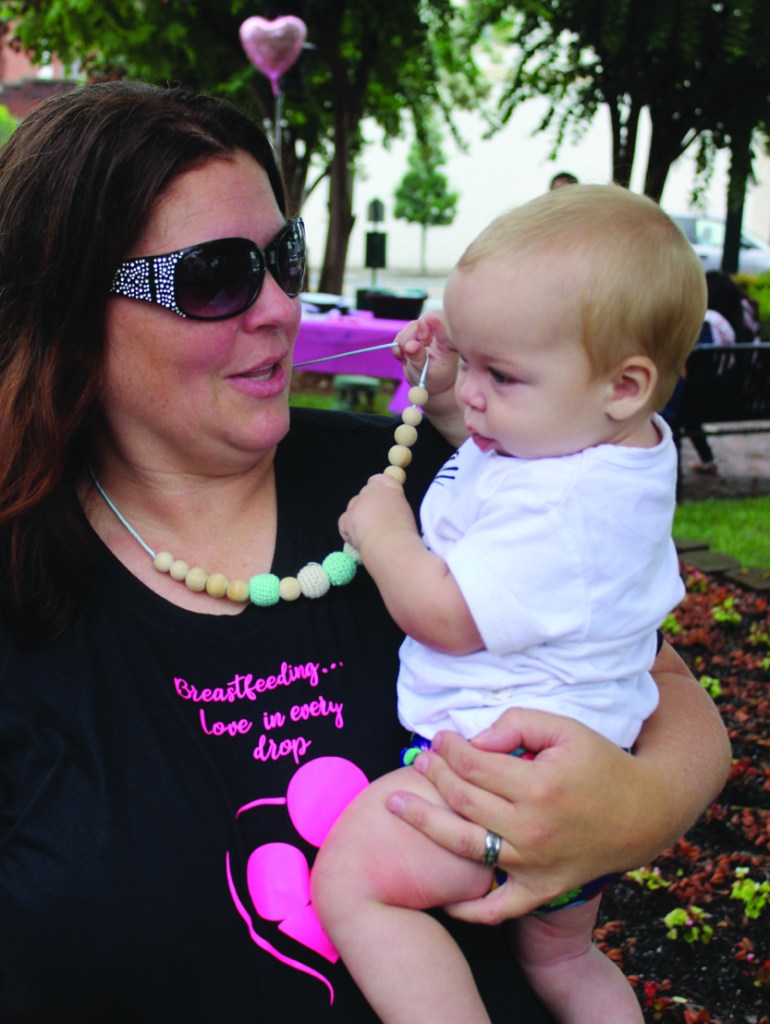 Colton Fisher, 10 months old, gets a good grip on mother Chrissy’s necklace as they wait for the Big Latch On to start.

Babies from around the county — along with their mothers — came out to Courthouse Square Park Saturday to raise awareness about an activity that occupies a good quarter of their lives: breastfeeding.

“They don’t call it the foundation of life for nothing; there are so many benefits, health-wise and financially,” said Jessica Ledbetter, a mother of two who works for Stanly’s Women’s, Infants and Children program — the organization sponsoring the event. “This is our way of getting the word out.”

As part of World Breastfeeding Week, WIC brought information, snacks, face-painting and even a pair of food trucks for the breastfeeding moms in the area. However, it wasn’t just the moms who ate. After getting settled in, the mothers sat down together to nurse their babies at the park.

Known as the Big Latch On, the international breastfeeding event takes place every year, she said. Women from Germany, to Nigeria, to Japan go into public places to breastfeed their babies at the same time (10:30 a.m.). This year, at least 58,000 people attended the various events. About 21,000 were breastfeeding moms.

“We want women to know that they have this option,” Ledbetter said.

Because while breastfeeding is nothing new, it is still intimidating for new moms, the women at the event explained. Babies do not naturally know how to breastfeed and neither do moms.

“It’s hard work,” said local mom Chrissy Fisher as she hefted 10-month-old Colton in her arms. “You have to learn, the baby has to learn. If you don’t know what you’re doing or have someone to show you. It can be overwhelming.”

WIC and several other groups offer resources to help moms learn to breastfeed. For instance, Ledbetter is a breastfeeding peer counselor for WIC. She coaches women on how to nurse their babies through free programs.

“But a lot of the time, moms don’t know that there is help,” Fisher said. “Or if they do, they don’t know where to get it.” 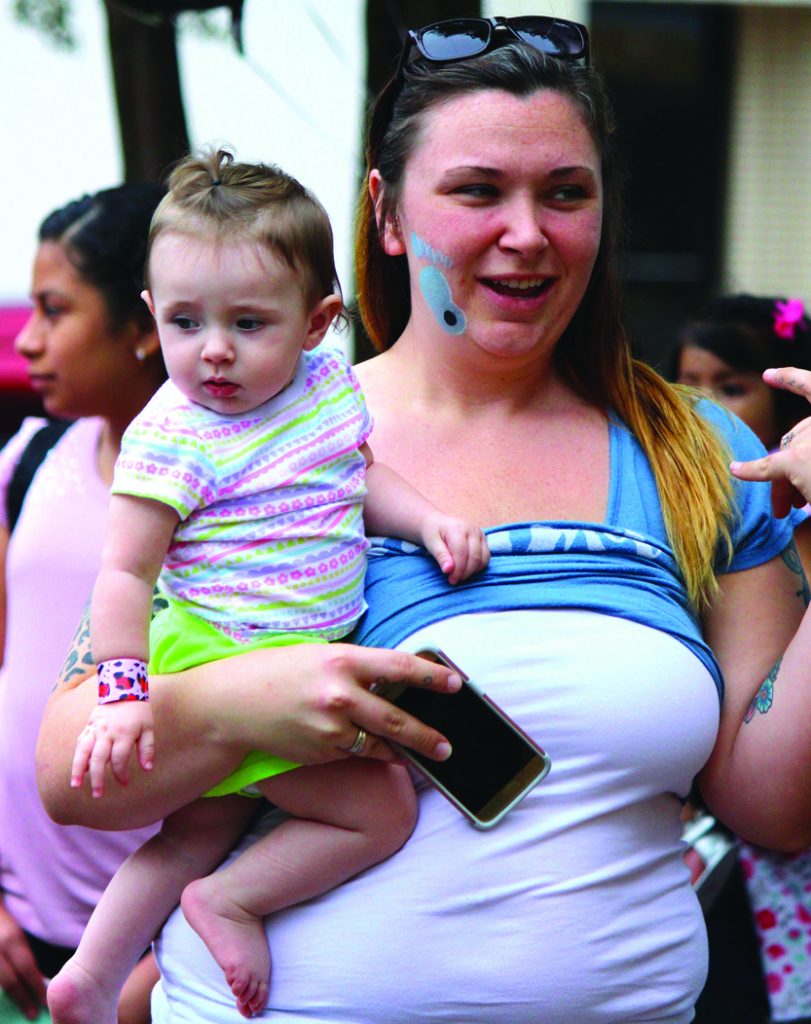 Tessa Johnson gets ready to settle onto a picnic blanket with daughter Jessa, 9 months, to take part in the Big Latch On.

With that in mind, WIC is planning to make the Big Latch On an annual event in Stanly, Ledbetter and Walters noted. The event will be used not only to share breastfeeding information and resources, but also help breastfeeding moms connect with each other.

“There’s a wealth of information between all of us,” said Ledbetter, a breastfeeding mom of two herself. “We’ve just got to get people together.”

In fact, that already seemed to be happening during their first event on Saturday. Members of local mommy groups passed along tidbits and upcoming events with others.

Fisher, who is part of the Eastern Piedmont Baby Wearing Group, talked with moms about different baby carrying wraps and harnesses.

“We actually go out to homes and let people try them, give them fittings,” Fisher said.

With all of that information flowing, organizers agreed that the babies who came out may be Stanly’s best and youngest advocates.

“We’re so grateful to every woman and child that came out and made this happen,” Ledbetter said.