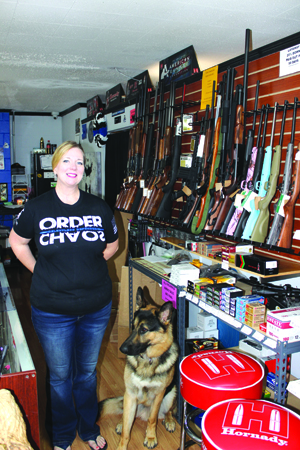 One local gun store has signed on with a national movement to promote firearms safety.

This is the second year the NSSF has sponsored a national shooting sports month, according to Zach Snow, shooting range services director for the NSSF.

“Our first National Shooting Sports Month last year was a tremendous success, thanks to
hundreds of ranges and retailers across the country signing up to take part and getting the word out to their customers and communities,” Snow said.

The NSSF is the trade association for the firearms industry. Its mission is to promote, protect and preserve hunting and the shooting sports. Formed in 1961, NSSF has a membership of more than 12,000 manufacturers, distributors, firearms retailers, shooting ranges, sportsmen’s organizations and publishers.

“We’re thrilled to have Scoot’s Place join in continuing the celebration of the shooting
sports in 2018.”

The business, owned by Melissa and Adam Torres, said the partnership is to encourage people and families to safely participate in shooting sports. The Torreses have five children, and Melissa said they often go out to a range as a family and shoot.

“It’s a sport to give kids something to do and teach safety at an early age,” she said.

Safety includes knowing what to do if a child is at another person’s house and sees a gun.

Torres works with many of her customers on improving their gun safety, including many ladies, whom she said sometimes feel intimidated about learning more. She said Scoot’s Place hosts classes at a local range for women to learn how to draw a gun from a holster and shoot.

“The more people go out and shoot, the more responsible of a gun owner they will be,” Torres said.

Safety is a major issue, she added, noting her husband participates in competitive shooting. He is an officer with the Albemarle Police Department.

“It’s not just timing and accuracy; they are watching your safety. That will disqualify you if you do anything unsafe,” Torres said.

“That’s what I’m watching (for in a class): where that gun is pointed, where the finger is. Your rules with gun safety are: keep it pointed in a safe direction, treat every gun as if it is loaded, keep your finger off the trigger, and know your target and what’s behind it. That is huge.”

Torres said shooting sports are all about responsibility, saying if a person is afraid of guns, they should not get one.

“You’re going to be a threat to yourself if you do,” she said. “If you are going to have a gun, be responsible.”

She also said responsibility comes from practicing both targeting and gun handling skills as well as safety.