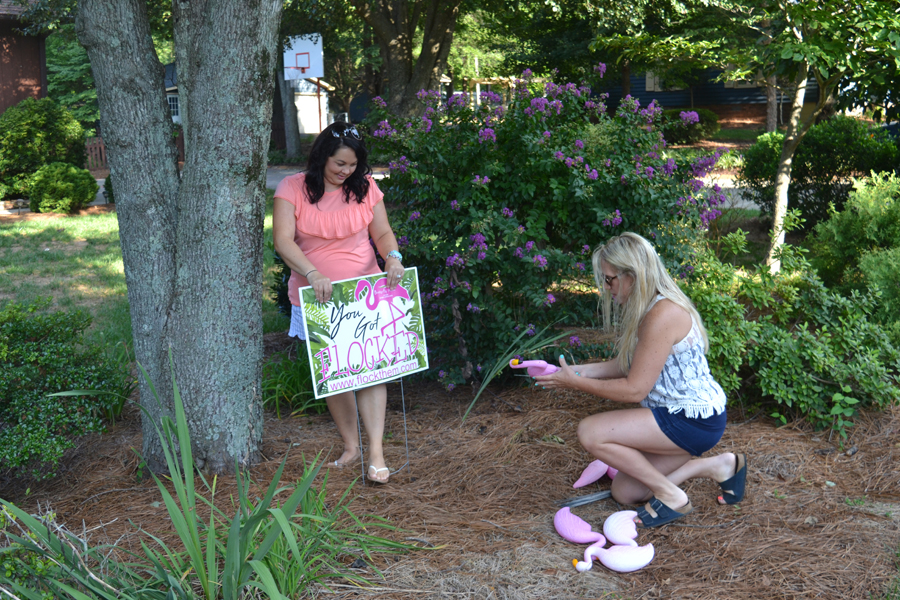 Carla Poplin, left, and Laura Harbeson "flock" a yard on Lauras Lane in Albemarle. Flocking is one of many fundraisers used to generate donations for the Butterfly House.

For curiosity seekers wanting to know the story behind the flock of flamingos appearing randomly on front lawns throughout the county, look no further than the Flocking Fabulous.

Flocking Fabulous, as dubbed, is one of 10 dance teams participating in this year’s Dancing with the Stars competition and fundraiser for the Butterfly House. Flocking Fabulous is one of four dancing trios. In addition to the annual dancing competition, each team organizes multiple fundraiser events with the collective proceeds benefiting the Butterfly House.

If not for such a good cause, getting flocked might otherwise rile a targeted neighbor. Finding a swarm of parked decoy flamingos in the path of a lawnmower could be misunderstood on a hot, humid summer day. But everyone seems to be having fun with the unusual fundraiser, even if they sometimes pretend to be mad. 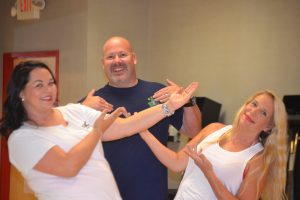 The trio of Carla Poplin, left, James Wilson and Laura Harbeson make up the Flocking Fabulous dance team set to perform in this year’s Dancing with the Stars benefit.

Nothing nefarious here. In fact, one of the Flocking Fabulous team members is Norwood police Chief James Wilson. He is joined by Laura Harbeson, a counselor, and Carla Poplin, a caterer.

“It’s silly, but people are having fun with it,” Harbeson said.

And it’s generating money for the Butterfly House in a big way. By all accounts, flocking will be the team’s highest grossing fundraiser.

A flock consists of a dozen flamingos. Each flocking costs $15. A flockee can pay $5 to learn who ordered the flocking. Or, $25 yields the name, orders the flocking of someone else and covers insurance not to the be flocked again.

Flocking Fabulous has already completed a pair of fundraisers: a pool party at Piney Point in June followed by working at Comedy Night for Tiffany’s at First and Main.

The team is also having a raffle for tickets to a Charlotte Hornets game.

On Saturday the team will have its Paddle and Pints. It begins with a guided paddle of kayaks and canoes to the Falls Reservoir at a price of $20. Later that evening there will be beer and wine tastings along with hors d’oeuvres at Loafers and Legends in Badin for $35.

Participants choosing both events can save money by paying $50.

Various fundraisers for the DWTS event is a large part of its success and why it’s one of Stanly’s largest fundraisers, second only to United Way.

“There’s no set amount we have to raise. We just raise as much as we can,” Wilson said. 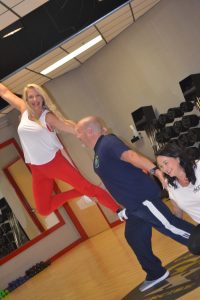 Laura Harbeson, left, James Wilson and Carla Poplin perform one of their Hip Hop moves for the upcoming annual Dancing with the Stars.

When the Flocking Fabulous is not spearheading fundraisers, the team is squeezing in practice sessions for the dancing competition. Gold’s Gym has been gracious in providing teams with a practice venue.

Other than revealing their music genre as hip hop, Fabulous is more guarded about the team’s dance routine than the fundraisers.

Harbeson chose hip hop as the team’s choice of music.

“That’s where my experience is,” she said. “If we’re doing this competition I want it to be something we have experience with.

“With hip hop your personality is a big part of it,” Harbeson added.

No way are they short on personalities. They’re all in for the cause.

“We’re going to put it out,” Poplin said of the team’s dance effort.

“I don’t mind the dancing part. I just don’t want to dance in front of a gazillion people,” Poplin added.