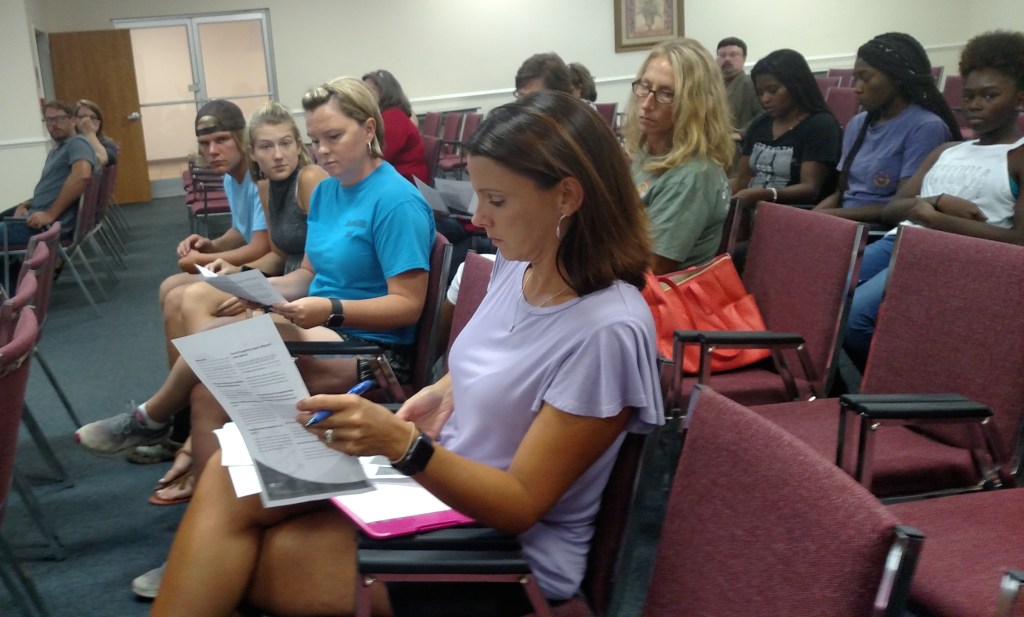 Photo by SHANNON BEAMON/staff Alicia Burrage looks over an IB application at an informational meeting hosted at the Stanly County Commons Thursday night.

Stanly County Schools is gearing up for its first International Baccalaureate Diploma Program.

The rigorous, four-year, multi-disciplinary curriculum — often used as a college prep track — will take about two years to get fully started in Stanly County, officials stated. But any interested freshmen are asked to apply now.

“All the classes build on each other,” said Randy Mann, principal for North Stanly High School. “In order to qualify, they need to take certain courses this year.”

The program will be hosted at North Stanly High but will be open to freshmen from any high school, officials noted. Those in other districts will have to transfer to NSHS by their sophomore year, but when they transfer, transportation will be provided.

“If they stay (at their current schools this year), we’ll work with counselors to make sure they get enrolled in the right classes,” Mann said.

As for sports, any IB Program students will play for NSHS once they transfer, officials added.

Students who wish to apply must do so by Friday. Applications are available both on the SCS website and their main office (1000 N. First St., Albemarle).

“We’re very excited to get our first cohort lined up,” Mann said.

Having worked at an IB school in the past, Mann is familiar with the rigors and benefits of the IB program.

Students in such programs take a much more challenging course load, he said. Along with taking all honors classes, they must enroll in special IB electives, a theory of knowledge class and complete a two-year extended essay project. In fact, the course load often requires students to double up on sciences or maths to meet program requirements.

“But it is doable,” said Ashley Carter, SCS’s future IB coordinator. “I’ve seen students handle that kind of workload plus sports year around… it’s not unachievable by any means.”

For those who do take that on, there are numerous chances to earn college credits. Each IB course comes with an end-of-term exam, Mann said. Depending on how students do, universities count the exam toward their credit hours.

“Those numbers in themselves show you the value of this program,” Mann said.

But the value also goes beyond that, he argued. IB programs put a deliberate emphasis on character building and interconnected learning for a more rounded education.

For example, the students’ theory of knowledge class is completely dedicated to pulling together multiple subjects into one class. In their junior and senior years, they are also given a class period to develop interdisciplinary projects of their own. Also, students are regularly required to do service hours and other character building exercises.

“Which is more marketable to a college because it’s more career oriented,” Mann said. “(Students) are competing with people across the world for jobs nowadays… it’s not just about academics.”