The 60-year-old killer of a Badin man who was shot in the head at point blank range will serve between 14 and 17 years in prison. 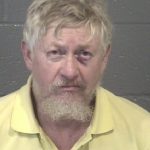 Randy D. Faggart pleaded guilty to second-degree murder on Aug. 1 for the June 8, 2017 slaying of 66-year-old Charles “Chuck” R. Maher. The two men had argued over a woman before Faggart shot Maher in his front yard.

Prior to the slaying Faggart had no criminal record, which factored into the plea for a lesser charge. Faggart could have been charged with first-degree murder which carries an automatic life sentence without the possibility of parole, said Stanly County District Attorney Lynn Clodfelter.

He further pointed to other mitigating factors as the reason for the lesser charge.

“In this case we considered the fact that the defendant had no prior record, had been drinking at the time of the offense, that there was a dispute regarding a romantic relationship involving a third party, and the overall strength and circumstances concerning the case,” Clodfelter said. “Alcohol impairment and heat of passion are both factors that may negate the elements of first-degree murder. Alcohol can negate a specific intent to kill and heat of passion can negate deliberation which is defined as a cool state of mind.”

Because of the aforementioned factors, Faggart’s cooperation with police and his age, Clodfelter agreed to the plea.

Travis Maher, the victim’s son, said he would have preferred a harsher punishment, but understood the rationale as well as the unpredictability of a trial.

“The consensus is that it’s a life sentence,” Maher said. “They don’t think he’ll make it out at his age, but you wonder. At least he got some time and he can’t hurt anybody else.”

He was appreciative of the District Attorney’s office for its work with the case.

“We felt like they did what they could do,” Maher said.

Chuck Maher had just returned from walking his dog when Faggart confronted him. An argument ensued before Faggart pulled out a handgun and fired.

When Faggart left the scene in his pickup truck an off-duty sheriff’s deputy, who had heard the gunshot, elected to follow Faggart to his residence only a few blocks away.

A retired postal carrier, Chuck Maher was a Vietnam veteran who remained active with the Veterans of Foreign War Post 2908 until his death.

“We want my dad to be remembered in a positive light. He was a soldier and he did a lot for the community,” Travis Maher said.