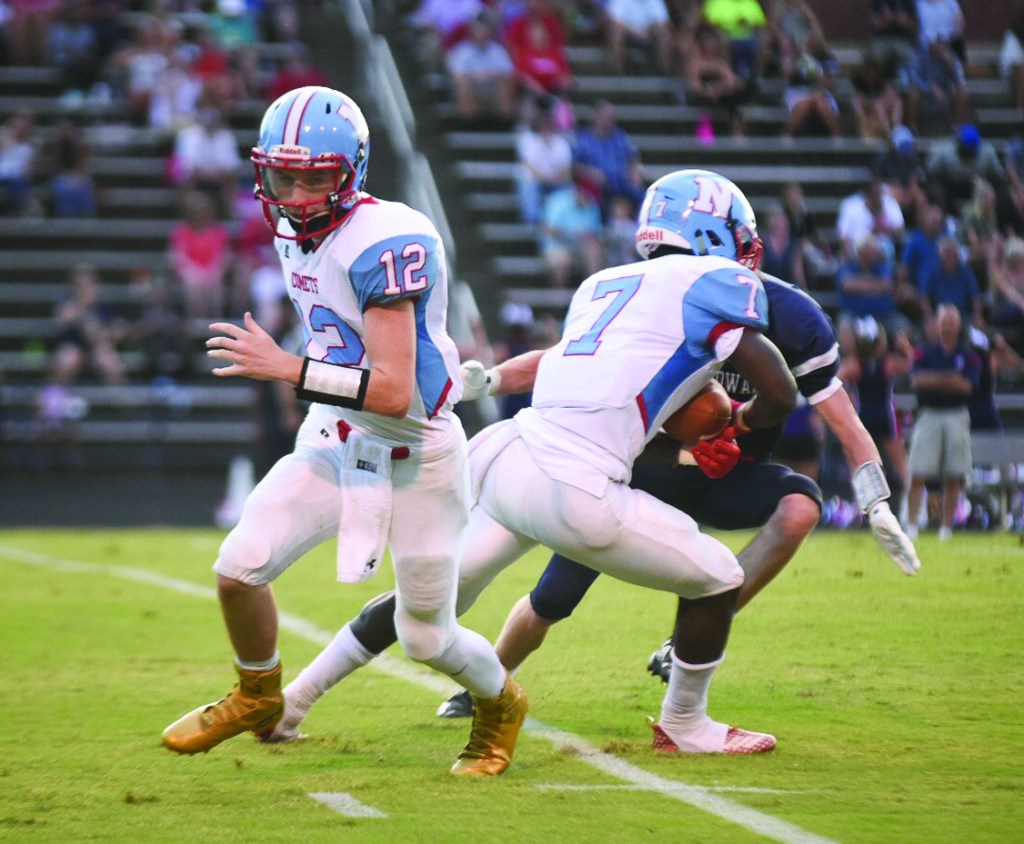 By Marny Hedrick, for the SNAP

It is quite clear the East Rowan Mustangs like their new pro-style offense.

“I really like it, because it is producing touchdowns,” said junior quarterback Logan Forbis. “My line was blocking great and they gave me all the time in the world.”

“I like it a lot, too,” noted head coach John Fitz, who gave all the credit to his players and new offensive coordinator Randy Kaiser, who brought the offense with him from Mt. Pleasant High.

“Our players came out tonight ready to play,” Fitz said. “They have confidence in what we are doing and they believed in each other tonight.”

East Rowan posted 18 first downs and 322 yards of offense. The Mustangs handed the ball to senior runner Christian Bennett and sophomore Sammy Pinckney 23 times each in the contest, with Bennett putting up exactly 100 yards and a score. Pinckney added 86 more yards.

“I owe every bit of the credit to our offensive line,” said Bennett, whose three-yard plunge basically sealed the game with 11:52 left to play. “But I like it when the team depends on me down the stretch to get the necessary yards.”

North Stanly closed the gap to 27-21 with just 5:23 left to play, so the Mustangs simply handed the ball off to Bennett on eight straight carries to move the ball from their own 20-yard line to the Comets’ 47. Forbis then took a knee, running out the clock and securing the win.

East ran the ball behind Bennett and Pinckney 28 times in the second half to grind out yardage and use up valuable time on the clock.

“We had a great week of practice and are finally clicking on all cylinders,” said Hunter Eagle, the senior center, who spent much of his night battling North Stanly’s 5-star defensive tackle C.J. Clark, a 6-3, 290-pound senior who just committed to N.C. State. “He was big and strong, but we came together and showed some character.”

The win was the first on opening night for the Mustangs (1-0) in six years, while the Comets (0-1) were coming off their best season in school history at 10-2.

Friday’s result also may have been a bit of a surprise since North Stanly battered East, 39-25, in last season’s opener behind 336 yards and four TDs by running back Cameron Davis. However, on Friday night, Davis was limited to 49 yards on 11 carries and a touchdown. Davis came in to the contest having rushed for more than 4,700 career yards and 68 career touchdowns.

Last year’s result and the stellar reputation made no difference to the Mustangs.

“The past is in the past,” said Bennett, noting revenge was not a factor. “We were just worried about this game and taking care of business.”

The game did not start out on a positive note for East, as just over a minute into the game, Comets’ quarterback Bailey Baker hit speedy receiver DJ Rhone on the right side in the flat. Sixty-five yards later, it was 7-0 North Stanly.

The Mustangs then started imposing their will at that point with an 80-yard drive culminating in a 22-yard scoring pass from Forbis to senior receiver Sam Wall (6 catches for 89 yards and two TDs). Bennett took a pitch for a two-point conversion to make it 8-7 and East never trailed again.

East then opened the second quarter with another punishing 75-yard drive behind the running of Pinckney and Bennett. Forbis then found Wall open again on the left side of the end zone to make it 15-7.

A short punt then set the Mustangs up at the Comets’ 40-yard line late in the first half. After converting a fourth-and-three on a Bennett run, East went up 21-7 at intermission when Forbis hit senior Gabe Hinceman over the middle for a 26-yard TD pass with just 36 ticks left on the clock.

North Stanly made a comeback effort in the third period when Baker surprised the defense with a 48-yard sprint to the Mustangs’ 5-yard line on a keeper. Davis scored his only touchdown of the night on the next play to cut the deficit to 21-14 with 6:13 left in the third.

But the Mustangs proceeded to use up all the remaining time in the third period with a 13-play, 80-yard drive. Bennett scored from the 3-yard line on the first play of the fourth quarter, giving East a commanding 27-14 cushion.

The Comets did put together a nice drive on their next possession, but East defensive back Jax Fitz intercepted Baker and raced 55 yards to the North 25. The scoring opportunity stalled and Hinceman missed on a 34-yard field goal.

North Stanly added their final score with 5:20 left — on a pass from Baker to receiver Garrett Clark.

But Bennett and the Mustang offensive line made sure the Comets did not touch the ball again, running out the clock.

North Stanly will be open next week before heading to county rival West Stanly on Aug. 31.