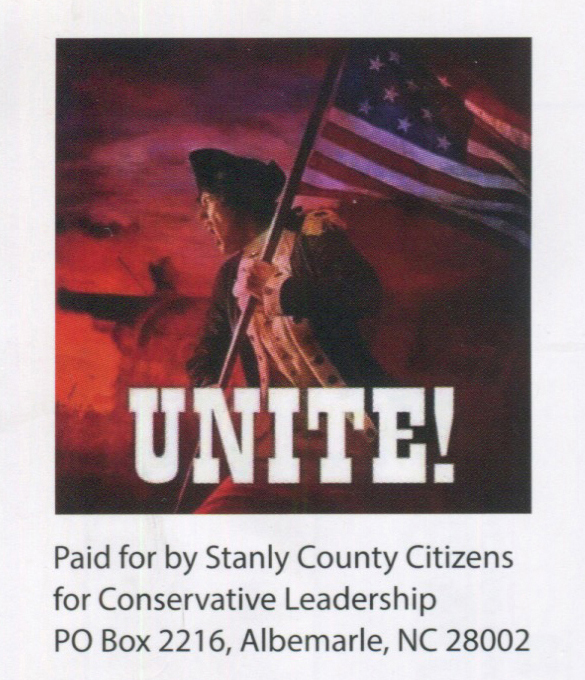 The Stanly County Citizens for Conservative Leadership, a political action committee, had been terminated when its logo, above, appeared on a controversial mailer four days prior to the Republican primary.

Not only was the Stanly County Citizens for Conservative Leadership an illegal political action committee when it distributed a controversial mailer four days before the Republican primary, but its reported officers claim they knew nothing about the PAC’s actions.

As the N.C. State Board of Elections & Ethics Enforcement (SBOE) continues its investigation into the local PAC, questions remain as to who was behind the mailer that attempted to sway the GOP primary outcome by branding specific candidates as liberal.

Because of the SBOE’s ongoing investigation, it cannot comment on the probe.

Election officials, however, insist it intends to hold the PAC and its officers accountable per state law.

“In general, the State Board has the authority to impose civil penalties (G.S. § 163A-1451), to order violators to cease and desist from the violation, to order violators to cease committee activity until appropriate reports are filed and penalties paid, and to publicly reprimand violators, among other options,” Pat Gannon, SBOE public information officer, wrote via email on Monday.

“Intentional violations of campaign reporting statutes may result in criminal charges. The State Board has the duty to report possible criminal violations – either misdemeanors or felonies – to the appropriate district attorneys, who would be responsible for any prosecution (G.S. § 163A-1445),” he continued.

An outcome of the investigation could take a while. Any consequences will likely take longer.

“These investigations can take time because of the volume of complaints, the amount of investigative work required and available resources at the agency,” Gannon wrote.

Not since the 2016 elections when the PAC funded a campaign mailer, has it filed a campaign finance report as required by law. In fact, the SBOE last received a campaign report from the PAC on Jan. 19, 2017, which was for the third quarter of 2016 and delinquent by nearly three months. The mailing also included the PAC’s fourth quarter filing.  Reports were then signed by Greg Underwood, PAC treasurer.

After the 2017 filing, Underwood ignored numerous letters by SBOE to comply with campaign finance laws. The SBOE mailed six letters about the PAC’s noncompliance. Most were returned as undeliverable per Underwood’s refusal to accept them.

On Feb. 21, 2018, the state terminated the Stanly County Citizens for Conservative Leadership as a PAC.

Nevertheless, the PAC took a hand in the controversial mailer for this year’s primary.

It was not until the SBOE’s investigation into the terminated PAC’s mailing that Underwood finally responded.

“I have reviewed the email that was forwarded to me,” Underwood wrote to the SBOE, which was received on Aug. 6, 2018. “The last report that I signed was for the fourth quarter of 2016.

“Since the inception of this PAC I have never received any banking information at my address so it would be impossible for me to prepare any of the reports. None of the reports that I signed were prepared by me,” Underwood continued.

He further wrote that he resigned as treasurer on Jan. 18, 2017. Underwood said he had not signed any subsequent reports for the PAC.

Despite his previous signing of documents, Underwood did not mention who actually prepared the reports or handled the bank statements, reportedly through the Bank of North Carolina at the inception of the PAC.

“I’m returning unopened envelope to you. I have nothing to do with this so please don’t send me any further correspondence,” Underwood wrote by hand on the Aug. 6 letter.

Underwood did not return a telephone message seeking comment for this story.

A handwritten message was also noted on the outside of a letter addressed to Blake Underwood, Greg’s son.

“I am not, nor have I ever been, treasurer of this committee. Please remove me from all correspondence regarding this committee,” the note read.

In 2015, an original  statement of organization for the PAC listed Greg Underwood as treasurer, Blake Underwood as assistant treasurer, and James Flynn as custodian of books.

When reached by telephone Monday, Flynn said he was not affiliated with the PAC and refused to comment further.

Messages left with Margin of Victory Partners to determine whether the group performed services for the PAC and/or who requested and paid for services in 2018 were not immediately returned.

Two other candidates with Stanly ties used Margin of Victory Partners for their campaign mailers. N.C. Rep. Justin Burr, R-Stanly, and county Commissioner Joseph Burleson have a history with the company.

Burr is among a number of candidates listed as Margin of Victory clients on the company’s website.

For the GOP primary, Burr paid Margin a total sum of $38,532, paid in four installments for campaign mailers, records show.

The PAC mailer endorsed both Burr and Burleson while painting their respective opponents as liberal candidates with purported ties to Democrats.

Incidentally, both Burr and Burleson lost their re-election bids, respectively.

Back in 2016, when the PAC was still active and legitimate, both Burr’s campaign for N.C. House and Burleson made significant financial contributions to the PAC. Stanly County Republican Party Chairman Phil Burr also made a sizable contribution to the organization, records show.

Justin Burr did not immediately respond to an email seeking comment about his knowledge of the PAC’s actions during the primary.