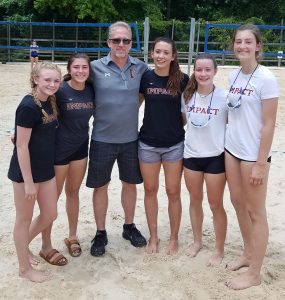 I-3 Volleyball, a local sand volleyball club run by Eric, Rosemary, Brienna and Skyler Laskowski, brought the group of girls together to continue to grow the sport of volleyball in the area and to expose the kids to another element of volleyball.

The girls, who were all new to sand volleyball, competed for the first time in tournaments on the Carolina Region Junior Beach tour across North Carolina in Charlotte, Denver, Hickory and Wilmington.

The team of Margaret Huckabee and Kayli Cleaver won two tournaments in Charlotte and a third in Denver. Margaret and Kayli missed a national qualifying event due to injuries. The pair also won the 14U silver level championship in Wilmington. I-3’s youngest team, Addison Barbee and Stella Bondurant also competed in Wilmington.

In Denver, it was nearly an I-3 sweep of the 14U semifinals. The team of Caylee Clayton and Jacy Noble and the team of Abbie Huneycutt and Anna Mitchell joined tournament winners Margaret Huckabee and Kayli Cleaver to take three of the four semifinal spots. Mia Huckabee and Keeli Crisco battled their way into the semifinals of the 16U division.

In Hickory, four teams made it to the quarterfinals. The team of Carlee Wallace and Andi Daniels and the team of Caylee Clayton and Jacy Nobles battled against tough opponents but fell short of making it an all I-3 semifinal. Maycee Williams and partner Kelsey Parker and the team of Abbie Huneycutt and Anna Mitchell fell in the semifinals. The two teams, however, did earn a bid to the ROX Volleyball National Championship in Georgia.

Maddison Kee and Carly Carpenter did not get to compete this season due to injuries.

The athletes of I-3 Volleyball included: