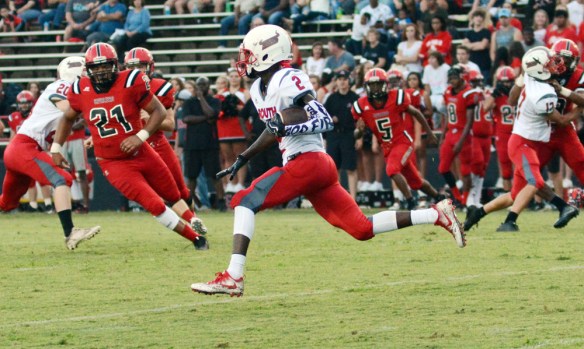 Tori Colson finds room up the middle and races downfield for a 90-yard kickoff return for a touchdown in Friday's road game at East Rutherford. (Photo by Starla Whitley) 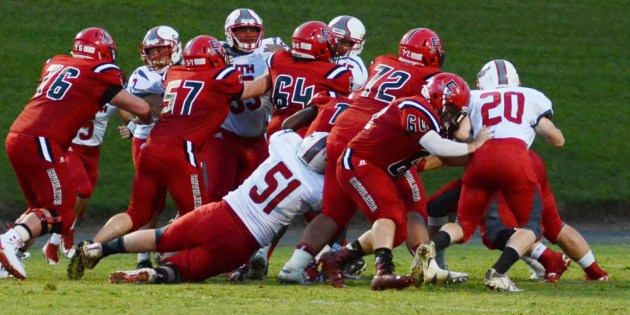 South's Cade Whitley makes a tackle on an East Rutherford running back in the middle of the line in Friday's game. (Photo by Starla Whitley)

Without the team’s projected starting quarterback from the preseason, the South Stanly Rebel Bulls made the long trip Friday to Forest City to take on the East Rutherford Cavaliers.

Three second-quarter touchdowns led the Cavaliers to a 34-14 win over the Bulls.

Marcus Green led South (0-1) in rushing yards with 115 on five attempts, including a 58-yard scamper.

As a team, the Bulls rushed for 154 net yards including yards lost on five sacks of quarterback Justin Gaddy. Gaddy was 2-of-12 through the air for 33 yards, including a touchdown pass to Tony Loftin late in the fourth quarter. He was intercepted twice by the East Rutherford (1-0) defense.

Cavaliers quarterback Cameron Simmons paced East Rutherford with 237 passing yards, completing 10 of 30 passes with three touchdowns. Senior wideout Jordan Harris hauled in five catches for 154 yards and two touchdowns. On the ground, Demetrius Mauney led all rushers in the game with 130 yards on 15 carries. As a team, the Cavaliers had 422 total yards of offense, 249 through the air and 173 on the ground.

South opened the game aggressively, running a fake punt on the opening drive of the game but losing yards back to the Bulls’ 8-yard line.

On East Rutherford’s first offensive play, Simmons threw a wide receiver screen to the home side of the field to Harris for a touchdown. The extra point put the hosts up early, 7-0.

South immediately answered on the ensuing kickoff. Tori Colson fielded a low kick at the 7-yard line, followed his blocking straight up the middle, dodging three tacklers and cut to the left, running down the sideline for a touchdown. Brandon Crump’s extra point tied the game 7-7.

East Rutherford drove down to the South 28 on its next drive but failed to convert on fourth down.

The Bulls got a first down on the team’s next drive which stalled at midfield. South again tried a fake punt on the next drive, but the pass fell incomplete.

Taking over at the South 43, the Cavaliers were just outside the red zone but again gave the ball up on downs.

South punted for the first time on the first play of the second quarter, giving East Rutherford the ball at the South 44. Two plays later, the Cavaliers fumbled the ball and Rodney Hammond recovered for the Bulls.

On the team’s next drive, South suffered three straight penalties. then lost a fumble at the Bulls’ 39-yard line. After a 5-yard penalty, Simmons rolled right and avoided a South lineman, throwing to Calvin Jones who got behind two defenders and hauled in the pass for a 44-yard touchdown. The extra point put the hosts up 14-7.

South’s next drive started at the Bulls 20, but Green broke free down the left side for a long gain into Cavaliers territory. Gaddy was sacked on the next play and the drive ended in a short punt.

East Rutherford then drove 65 yards in seven plays, capped by a 30-yard touchdown run from Mauney on a draw play. The extra point was no good, leaving the Cavaliers ahead 20-7.

Another fake-punt attempt on fourth down was unsuccessful for South late in the first half, setting up East Rutherford on the Bulls’ 35-yard line. The drive stayed alive on a defensive pass interference penalty, then ended on an incompletion just outside of the end zone.

South’s next drive ended in a punt which the Cavaliers returned to the Bulls 6-yard line. However, it was called back on a penalty. Four plays later, Simmons rolled to his left and found Harris who curled back to the ball at the South 10-yard line to make the catch. Harris then veered toward the home sideline and angled his way into the end zone. The extra point gave the Cavaliers a 27-7 lead heading into halftime. 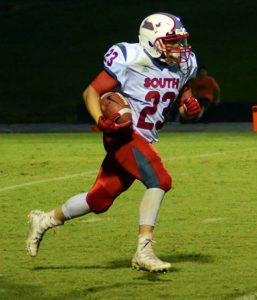 Tony Loftin had the Bulls’ other touchdown in the game on a pass reception from quarterback Justin Gaddy in the fourth quarter of Friday’s game. (Photo by Starla Whitley)

In the third quarter, South’s defense prevented the Cavaliers from adding to the lead. Those efforts included following a blocked punt which set East Rutherford up at the Bulls 14. Three plays later, Davis Moose blocked a 31-yard field goal attempt, giving South the ball back.

Late in the third, Green broke free for a 58-yard run down to the East Rutherford 30-yard line.

In the fourth, East Rutherford scored on a quarterback draw to Jayson Waddell from eight yards out to go up 34-7 with 9:42 left in the game.

South’s final scoring drive started at the Cavs’ 45-yard line. Six plays later, Gaddy found Loftin in one-on-one coverage deep on the right sideline. Loftin fought with the defender, came up with the catch at the 8-yard line and stayed on his feet, sauntering into the end zone. Crump’s point after made the score 34-14.

“Our effort was there, but we are just one or two steps away from being a very strong football program,” South head coach Ryan Ochier said.

He added the running game was the bright spot for him on offense and when blocked properly, the plays led to big gains.

“We have to focus on finishing our plays and perfect execution,” Ochier said.

Defensively, he liked the team’s balance in terms of the number of players with four or more tackles.

“Our run defense was very strong and our blitz packages caused confusion and kept (East Rutherford’s) quarterback on the run,” Ochier said.

He noted the strong play for South on special teams with the blocked field goal and kickoff return for a touchdown.

“At other times, we made several mental mistakes that must be corrected,” Ochier said.