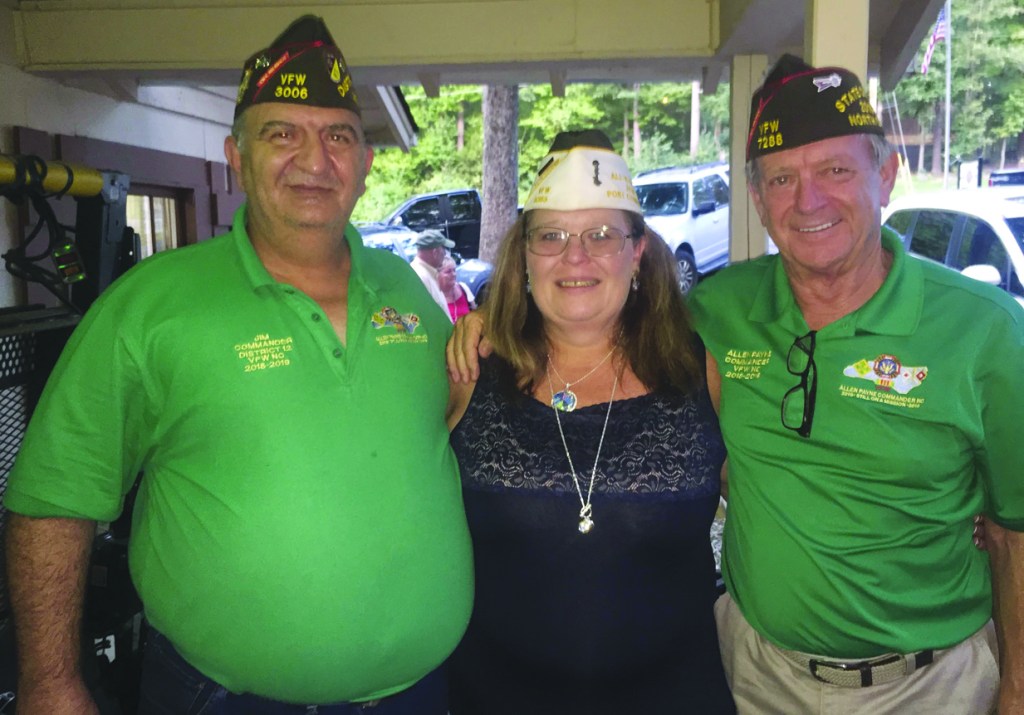 “Still on a mission” —that is the slogan, motto and code held by N.C. Cmdr. Allen Payne from the Veterans of Foreign Wars of the U.S.
Payne made history Tuesday night, as his visit to a VFW Post 6365 meeting in Locust was the first appearance by a state commander in the post’s 61-year history.
The post, which is tied for the second highest membership percentage in the state, has recently increased its attendance to 38, with plans of even more expansion going forward.
“I gave all my district commanders a survey and wanted to know about what we can do to make the VFW better and what we can do to make it more enticing to younger people,” Payne said. “The last question of the survey was ‘Have you ever had a state commander visit your post?”
According to Payne, VFW 6365 Cmdr. Roberta “Bobbi” Sheets asked him to come visit and to get a glimpse of the organization’s recent growth and doubling in membership over the past three years.
“It’s really nice here because it’s more like a family reunion type atmosphere. There’s nothing stuffy or formal about it,” Payne said. “We have 137 posts and 17 districts in North Carolina, and one of my goals is to visit as many of them as I can.”
Sheets described the Locust post as a community service group that is dedicated to general assistance to the area.
After Hurricane Matthew ravaged North Carolina in the fall of 2016, the post raised $1,900 to help out families in need.
“We do a lot of veteran outreach programs,” Sheets said. “But we don’t just help veterans — we help widows and we help kids with scholarship programs.”
One of those programs is Voice of Democracy, which has been generating scholarship funds for high school students since 1947. Based on an essay-based submission system, the national winner gets a $30,000 scholarship.
In North Carolina, each district winner gets invited to the convention in June where the top three winners are announced. The winner receives a $5,000 scholarship, the runner-up gets $3,000 and second runner-up pockets $2,000. That leaves 14 other district winners that each receive $1,000 scholarships.
“When it comes to our scholarship programs, it’s not about us. It’s about the kids and giving them a chance,” said District 12 All-American Cmdr. James Fox.
Fox oversees eight posts across Stanly, Rowan and Cabarrus counties and is particularly excited about the growth of the Locust post.
“This post is the little engine that could and I’m very proud of all of you for the job you have done,” Fox told VFW members Tuesday. “This area is growing by leaps and bounds — there isn’t any reason why a couple years down the road you shouldn’t have over 100 members.”
Going forward, VFW commanders want to change the stigma surrounding their organization.
“We don’t just get together to drink and tell war stories,” Payne said. “We do a lot of good things for the community.”
VFW Post 6365 is a sponsor for the upcoming Family Fun Festival in Locust’s Town Center on Sept. 22. The event, operating from 10 a.m. to 4 p.m., is expected to attract upwards of around 500 people, according to VFW organizers.