Colts seized by Trojans in opener 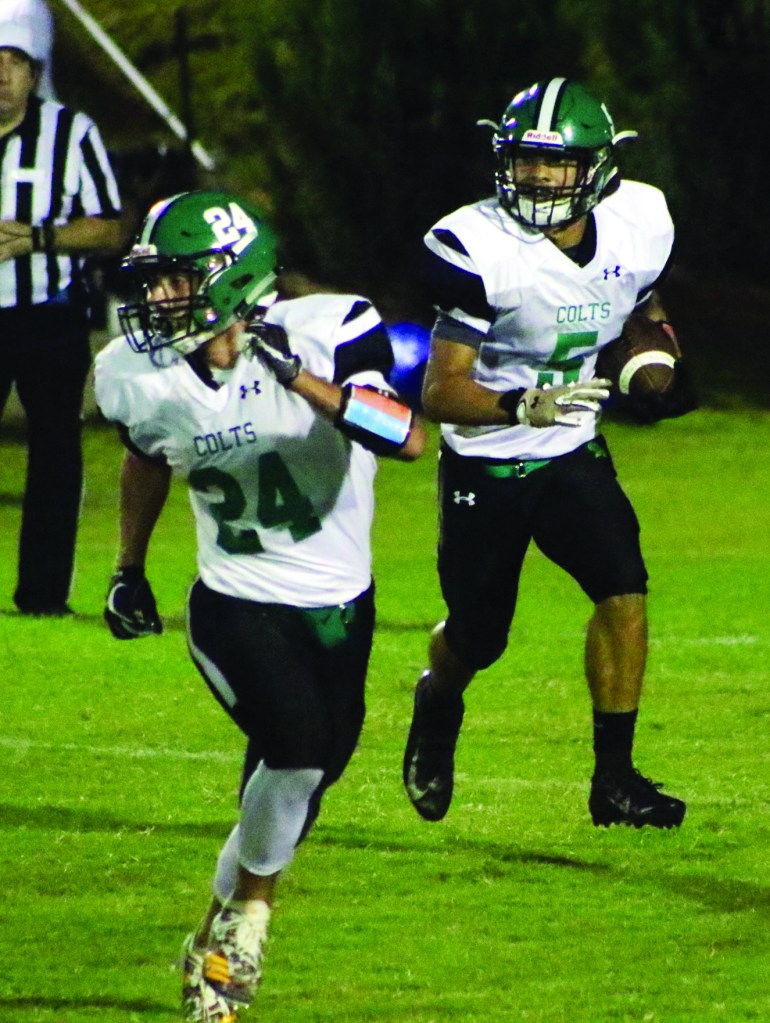 West Stanly's Lukas Scott gets a lead block from Hunter Stoker (No. 24) in the Colts' road game Friday at Northwest Cabarrus. (Photo by James Brown)

It took the Northwest Cabarrus varsity football team 12 seconds to score a touchdown in its 52-6 home victory over West Stanly Aug. 17.

The Colts (0-1), looking to avenge their 61-19 season-opening home loss to the Trojans (1-0) last year, were once again unsuccessful in stopping Northwest’s high-powered offense.

“We didn’t execute like we needed to,” second-year West Stanly head coach Brett Morton said. “We’re a much better team than this.”

Junior running back Tyrese Blake led the way for the Trojans with four touchdowns and nearly 250 all-purpose yards. His 67-yard scoring dash on the opening first down of the matchup put Northwest up in a hurry.

Despite a solid third-down run by Colt junior running back Tanner Gulledge, West Stanly was forced into a shallow punt on its first possession, setting up a 28-yard touchdown rush by Blake two minutes into the game.

Following another Colt three-and-out, Trojan wide receiver Isreal Sturdivant found himself in the end zone after catching a 43-yard pass from junior Nick Wilds-Lawing. Northwest led 21-0 following an extra-point kick at the 6:41 mark in the first quarter.

Senior running back Hunter Stoker recorded the Colts’ inaugural first down of the 2018 season after a pair of impressive runs.

Gulledge, along with running back Jordan Poole, assisted in engineering a six-minute Colt drive that eventually stalled out at midfield.

In just over a minute, Sturdivant and junior wideout George Miller-Duncan anchored a 78-yard Trojan drive that resulted in Sturdivant’s second touchdown of the night, a 22-yard pass from Wilds-Lawing.

One bright spot in the game for West Stanly was the agility of Poole. The sophomore powered the Colts all the way across midfield with a 52-yard kickoff return early in the second quarter. A few plays later, quarterback Nick Parker had an impressive 11-yard scramble that brought the Colts to the Trojans’ 15-yard line, where a pair of incomplete passes led to a turnover-on-downs.

West Stanly kicker Aldo Cruz punted after the Colts went nowhere with their opening third quarter possession. Trojan wideout Cam Saunders soon completed the longest catch of the night: a 52-yard touchdown pass from three minutes into the half.

It turned out to be the final drive for Wilds-Lawing, who finished with three touchdown passes and more than 150 yards of offense. After another Colt punt, Northwest put senior wide receiver Sam Walker behind center. A few plays later, senior Rico Sistoque recorded a 43-yard field goal to go along with his seven successful extra-point attempts.

Following a solid return by Stoker, West Stanly found itself in business with its only scoring drive of the night. The Colts tallied their first positive pass completion of the game on a 12-yard route to junior Daniel Hansen from Parker. Poole responded with a 29-yard dash of his own, and senior Lukas Scott notched a 12-yard completion.

With 4:15 left in the game, Stoker placed the Colts on the board with a three-yard touchdown run.

After a missed extra-point attempt by Cruz, Northwest retained a 45-6 advantage. However, the Trojans weren’t quite done. Blake achieved his fourth touchdown after a 95-yard kickoff return with a few minutes to play.

The Colts will host their home opener against Albemarle (0-1) at 7:30 p.m. Friday. The Bulldogs are coming off an 8-0 loss at Thomasville.