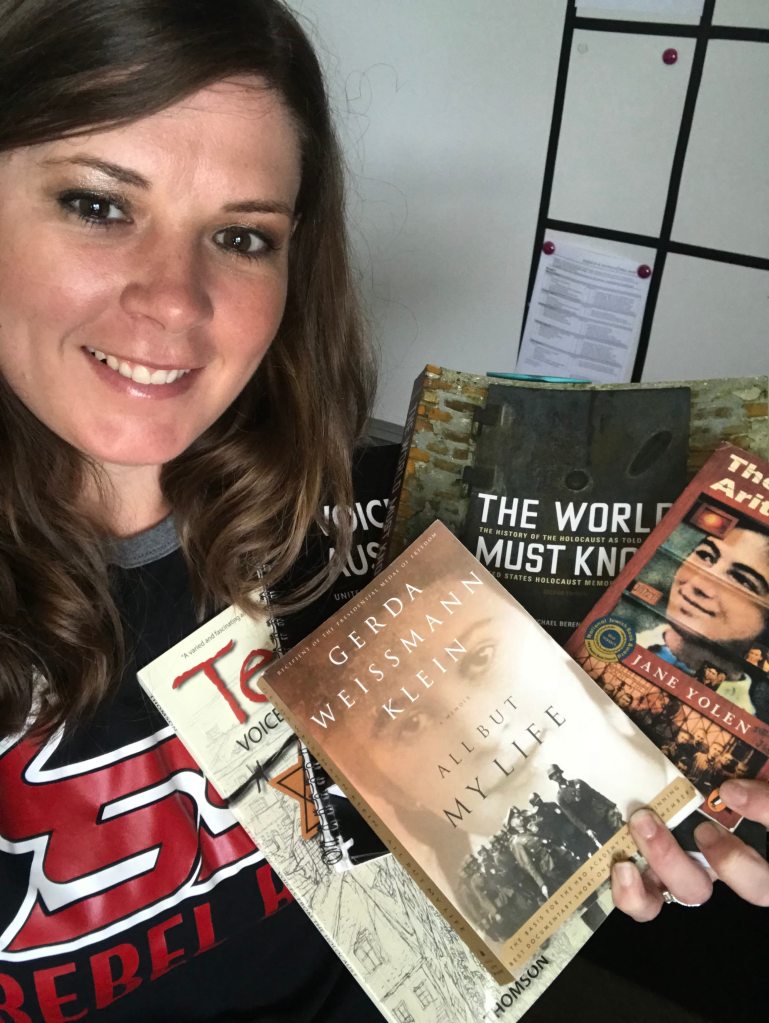 Meredith Howell shows the books she got at the Holocaust Memorial Museum as part of the Belfer Conference in 2018. Howell went to the conference on a Goldah Teacher Scholarship.

While students came into school armed with new notebooks, new pens and new clothes this week, teacher Meredith Howell came in armed with something else.

The South Stanly High School English teacher is about halfway through her teaching career, she said. And the milestone has come with its fair share of bumps and bruises. Whether facing a tough group of kids, a tough subject or a tough political debate around her profession, there’s been plenty over the past 14 years to leave her beat up.

“The future of education can look bleak,” Howell said. “There’s a lot of negativity going around about a career as an educator in North Carolina right now… I think it had gotten me down.”

But over the summer, Howell got a chance to gather not only new resources for her students, but gather some new passion for herself.

“It was one of those experiences that really reinvigorated me,” Howell said.

Surprisingly enough, that spark came from studying one of humanity’s darkest moments: the Holocaust.

During the summer, Howell attended a program known as the Belfer Conference, a teaching workshop organized by the the Holocaust Memorial Museum in Washington D.C. At the conference, she spent three days at the museum, learning more about the Holocaust from the staff and listening to seminars on how to best bring those harrowing events into her classroom.

“To be able to sit back and just absorb new ideas rather than rush through, it meant more than I can say,” Howell, who had been to the museum briefly twice before, said. “If I don’t feel comfortable in a subject, how can I get students to love it… This made me feel like I know it through and through.”

There are three floors to the Holocaust Memorial Museum, she said. Each day they focused on one. That meant the first day was spent learning primarily about Adolf Hitler’s rise to power, the second about the war and the imprisonment of the Jews, and the third about liberation efforts.

Before the museum was opened to the public, she and the other teachers got to go through all the exhibits on their floor for that day.

“It was a totally different experience without anyone else there,” Howell said. “Just you and all that happened.”

After going through the exhibits, they broke down for group discussions, an overview of teaching ideas and resources, and safe guidelines on how to talk about the heavy subject matter in the classroom.

“I think the biggest thing I took away was to never present just one perspective,” Howell said. “Teaching (the Holocaust) doesn’t have to be just doom and gloom… there were so many things that redeemed humanity in the midst of it. People who helped, triumphs… there are so many perspectives that show us something.”

Their last speaker of the conference is a survivor. Fleeing the advancing German army on a bicycle, her resourcefulness in the midst of the chaotic war front was just as mesmerizing as the many exhibits she saw, Howell said.

“Everything we did there gave me so many ideas,” Howell said. “I can’t wait to get in and use them.”

For her 11th grade English classes, which focus on American literature, she hopes to bring in materials that portray the American reaction to the Holocaust.

“That was actually what the moving exhibit was on at the museum,” Howell said. “One of the speakers spoke on that, too.”

For her 10th graders, who focus on world literature, her plans are centered around a book, Gerda Weissmann Klein’s “All But My Life.”

“It’s one survivor telling her story, which is powerful in itself, but the writing style is just so beautiful, too,” Howell said.

As for her 12th graders, Howell may consider a writing program. There’s a program called the TOLI Seminar that trains teachers on how to use Holocaust history to create a social action writing project.

“I did my thesis on the importance of writing (in the classroom),” Howell said. “So that’s definitely something I’m considering.”

But really that’s just the tip of the iceberg.

Between all the resources she gathered at the conference, Howell has enough materials to put together a dozen teaching units. Museum staff also gave her their personal contact information for further input, and gave each teacher at the conference $50 to spend on materials at their gift shop. Howell has a whole collection of Holocaust books she can go over now.

“It’s such a breath of fresh air to have all that at my fingertips,” Howell said. “There really are resources out there for teachers. People who want to work alongside you.”

And after finding such a bright spark in the dark, she’s convinced it’ll ignite something at SSHS. Soon enough it may be her students that are walking into the halls with some new inspiration, too.