A beloved merchant known for his generosity during the holidays died Sunday at the age of 76. 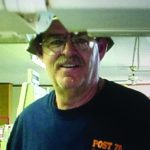 Whether it was spotting a customer a tank of gas until payday or a farmer fuel for harvesting crops, Morton earned quite a reputation at his Crossroads Grocery at the intersection of N.C. Highway 73 and Millingport Road.

Morton had a soft spot for those in need, especially during the holidays.

“I bet over the course of his life he gave away a half of million dollars,” said Charles Brown, friend and classmate at Albemarle High School – Class of 1960. “He could not let folks go without during Thanksgiving and Christmas.”

Perhaps because of his own poor beginnings, Morton never forgot the feeling of going without. So, he forged a humble life of sharing.

Morton’s kindness was reciprocated in loyalty and later in help.

He outlived his family, with the AHS Class of 1960 looking after him at the end of his life.

Despite a kind heart, Morton could be a spirited, sometimes blue devilish, fan when it came to Duke athletics.

“When Duke would beat North Carolina he’d call about 7 the next morning and say ‘Charles my T.V. went out last night — who won that game?’ ” Brown said.

Besides Duke, Morton was a New York Yankees fan. He also garnered local fame by officiating high school and college athletics. A kind heart, however, did not deter him from occasionally booting an unruly player or coach from a game.

Crossroads Grocery under Morton ended a few years back with the store undergoing a renovation and new management. It marked an end to era when country stores were more than a retailer. Like Morton, they were caring neighbors, not to mention a humble lifeline during lean times.