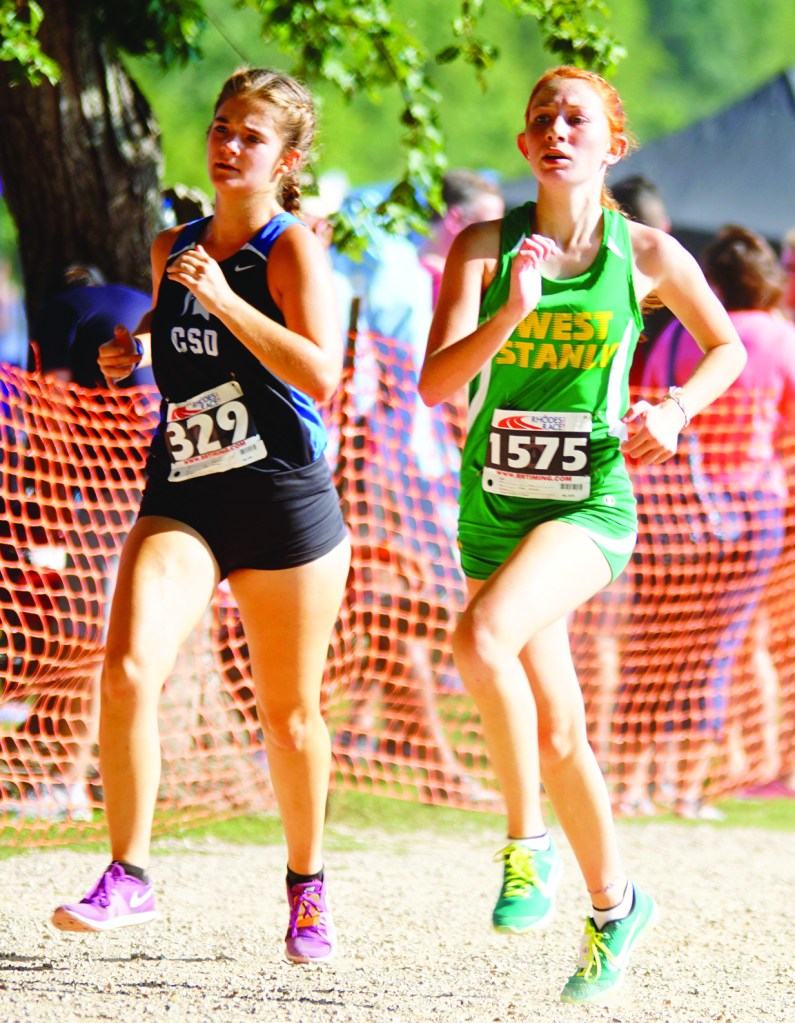 West Stanly's Payton Hill competes with a Community School of Davidson runner at the 2018 Providence Invitational. (Photo by Johnny McManus)

The West Stanly Colts Cross Country season got underway Saturday at McAlpine Park in Charlotte at the Providence Invitational.

Fifty-five schools competed in three categories, with more than 500 women and more than 800 men racing the 3.1.miles.

The Colts entered teams in the invitational and open sections of the meet. In the invitational division, West was predicted to finish 10th out of 29 schools but raced to a fourth-place finish. Midwest 2A regional powerhouse North Lincoln High took overall honors.

The Colt faithful got a preview of the battle for the top spot on the team between senior Pierson McManus and freshman Natalie Almond. Although the two Colts went through the first mile in a conservative pace they still found themselves among the top 25 runners, with Almond running a few seconds ahead of McManus.

As the two went through the second mile their pace intensified and both Colts started moving up through the pack. By the time the top two Colts hit the lake for the finish they were running stride for stride while running their fastest mile of the race. The senior had just a little more speed for the finish sprint as McManus hit the tape in 21:20, her fastest time to open a season in four years and a 10th place finish out of 168 finishers.

Almond was equally impressive, finishing in 11th place in 21:22 in her first high school meet. The time made Almond the eighth fastest Colt all-time. Both McManus and Almond hit the medal stand as the top 20 finishers received medals.

The two were just the start of a strong opening for the women from West Stanly. Senior Brooklyn Simpson ran a 22:46 for 36th place, just 46 seconds off her personal record and her best time to start a season.

Senior Maddie Miller may still give the top two Colts competition. The senior ran with the pair through the mile before developing side cramps. Miller still hung tough to run 22:59 for 39th place.

Sophomore Rachel Efird gave the Colts a solid fifth scorer in 58th place with a 23:40, adapting to the longer 5K cross-country race from her strongest event in track season, the 800-meter run.  Her time was nearly two minutes faster than she opened last season.

Senior Peyton Hill ran 26:12 for her best opening time, while freshman Aniston Hann 26:45 and junior Kaylee Hartsell 26:46 both had solid performances in their first cross-country meet.

The Colt men’s invitational race preceded the women’s section and benefitted a bit with cooler temperatures. West Stanly had its best opening meet in recent years, finishing eighth out of 26 schools. Lincoln Charter was the overall team champion.

The Colt men also had a battle for the top spot on the team with junior Korbin McNeill, senior Noah Almond and freshman James Shue racing stride for stride through the first mile. The hill on the McAlpine course split the group up as McNeill pushed the pace and hit the lake the first time with a slight advantage over his teammates and Almond a few meters ahead of Shue.

The three Colts maintained the intensity with McNeill hitting the lake for the final 500 meters with a comfortable margin over his teammates. The junior finished the race in full sprint racing to a personal record 18:18 for a 25th place finish out of 209 finishers, just five spots from a medal. The time moved him to 30th on the Colt all-time list.

Almond was close behind in 18:36, also a personal record for 35th place and the time moved him to 37th on the all-time list. Both Colts were a minute faster than last year’s opening meet.

Shue hung on for 46th place in 18:46 for his opening high school cross-country meet, landing him 40th on the Colt all-time list.

Junior Daniel Brattain is healthy and raced to a personal record 19:54, 86th-place finish as the Colts fifth runner.

Sophomore Arturo Zelaya, like Martinez, plays fall soccer for the Colts and ran his first cross-country, finishing 119th in 20:33.

Freshman Blayne Morton had a debut with the top 10 Colts in the invitational section. Morton raced to a 21:21 time to start his high school career.