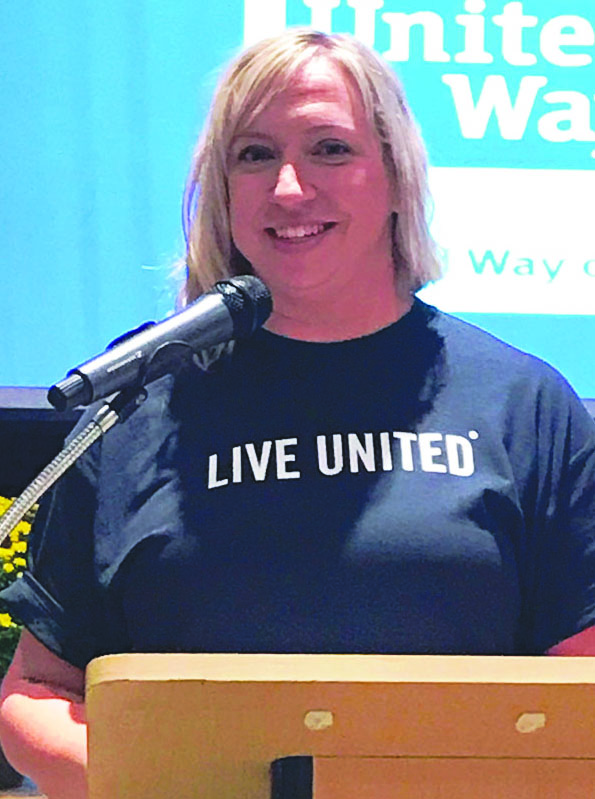 Photo by TOBY THORPE United Way Executive Director Salem Taylor spoke of the history and mission of the organization during its campaign kickoff.

The United Way of Stanly County kicked off its 2018-19 campaign on Wednesday with a breakfast at Atrium Health Stanly, featuring insights and remarks from partnering programs as well as supporting industries.

Iggy Austin of the Stanly County Partnership for Children, who serves as president of the United Way board, welcomed those in attendance while sharing an account of how United Way partner agencies recently worked together to assist a local family.

“This family consisted of a stay-at-home mom and children who were repeatedly experiencing physical and verbal abuse from the father,” she said. “The incidents included the father holding a gun to the mother’s face, which resulted in a report being made to the Department of Social Services. The incident was investigated and substantiated and immediately a referral was made to the Esther House, one of our partner agencies.

“At the Esther House this mother and three children were safely sheltered for several weeks. They received the support they needed during this difficult time in order to be able to rebuild their lives.

“The family is now thriving,” added Austin, noting that were it not for the assistance of agencies funded in part through United Way, the cycle of abuse might not have been broken.

“This story tells why I serve on the board of United Way of Stanly County,” she said. “We support programs that transform lives and impact our community.”

Following an invocation by Andy Jung, pastor of First Baptist Church of Albemarle, United Way of Stanly County Executive Director Salem Taylor spoke on the impact of United Way in the community.

“I choose to be with United Way because of its ‘big picture’ perspective,” said Taylor. “We work to address specific needs within the community, and United Way is in the center of determining what those needs are and what is to be done to meet those needs.

“United Way has been in Stanly County since 1973 and has brought about much positive change. I’m proud of our history and where we are headed, and proud to be a part of it,” she added. “Our reach is wide and our impact is tremendous.”

Chris Vaughn, director of the John P. Murray Community Care Clinic, one of the 21 partnering agencies with the United Way of Stanly County, gave an account of one of the many clients her agency serves, reminding those in attendance of the value of United Way funding in meeting the needs of the uninsured and underinsured in the area.

“This client is 58 years old and has worked in the fast food industry for the last 20 years,” said

Vaughn. “She is a very quiet person and doesn’t say a whole lot. She is making $7.25 an hour, and is working 30 hours a week. That comes out to a little over $11,000 a year, and after taxes it is under $9,000. There are two people in her home. The other makes no money. She has multiple health issues, takes seven medications a day, and will never make enough to afford insurance or health care.

“The sad reality,” she said, “is that this lady is not an isolated case in our clinic. She needs food. She needs gas to get to work. She needs heat and air in her house. And if our agency was not there, she would never receive medical care.”

“Our community has many, many, many needs,” added Vaughn. “So whatever you can do to help United Way meet those needs will be tremendously appreciated.”

Shannon Bernhardt, plant manager of Michelin Aircraft Tire Corporation in Norwood, spoke on the role of industries and employers in supporting United Way.

“United Way is really, really meaningful in small communities,” said Bernhardt, noting her involvement with United Way as a board member at her previous job in Oklahoma.

“Michelin is a huge organization,” she said, “and people often ask if a company that large has a heart, and Michelin espouses five core values which are respect for people, facts, environment, shareholders and customers. So, being a skeptic, when I joined the company, I made it my mission to find out if the values of the company were true. So for six months, I asked employees, ‘What do you like about working for Michelin?’

“The responses I got included ‘They mean what they say,’ and ‘The company will help me.’ So the employees at Michelin like working there because they feel safe and secure in their position, and that if something bad happens the company will help them. And the longer I’ve been with Michelin, the more it has become evident that we do care about the communities we are in by supporting the people of those communities,” she said, noting that support of local United Way campaigns is one way of doing this.

Bernhardt urged those industries and employers present to continue their support of United Way.

“Everybody is a leader of some kind,” she said. “Anything you can give helps someone. You are not asking because your company wants you to; you are doing it to help.”

Taylor closed the program by noting the organization has set a goal of $385,000 for the 2018-19 campaign, a slight increase over the previous year. Taylor also noted that Preformed Line Products is the county’s 2018-19 Pacesetter, and has already raised $14,000 for the current campaign.

For further information on the United Way of Stanly County, call 704-982-6916, or visit www.UnitedWayStanly.org.