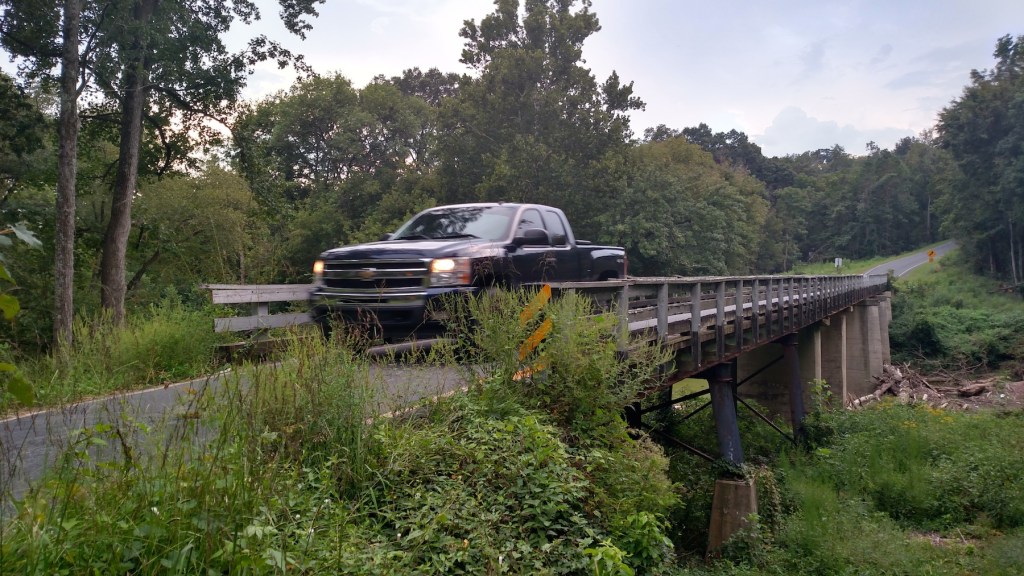 A truck crosses a bridge on Bethlehem Church Road that NCDOT is considering for removal.

The proposed removal of a bridge near Aquadale is stirring up opposition.

The N.C. Department of Transportation has suggested taking down a one-lane bridge on Bethlehem Church Road near the Prince Road sometime in the next few years.

However, since there are no plans to replace the bridge, dozens of residents would be cut off from a regularly used route.

“We definitely don’t want it closed,” said Jahala Williams, one of nearly 50 people who came out to 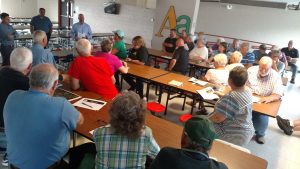 Residents of the Aquadale area gather at an NCDOT input session regarding a bridge in their community.

express opposition to the project during a public input meeting hosted at Aquadale Elementary School on Thursday.

Keeping the bridge open may not be safe, though.

According to NCDOT, the bridge was built in 1950 and has only been re-decked once. Re-decking involves replacing the road bed, so the bridge’s pilons and braces remain original.

In fact, during the bridge’s last inspection in March, its safety score dropped low enough that its weight capacity was reduced.

Moreover, if the bridge’s rating falls much lower during its next inspection in 2020, it could be forced to close due to state safety standards.

“So something has to be done,” said Division 10 deputy division engineer Brett Canipe.

That something comes in three options for NCDOT: remove the bridge, repair the bridge or replace the bridge.

Repairing the bridge may be close to impossible at this point, NCDOT engineers said. Too many key elements are deteriorated.

Replacing it is more achievable, but expensive. The last time NCDOT replaced a bridge of similar size off Mt. Pleasant Road it cost roughly $2 million. And it may be hard to justify that cost when it comes to the bridge on Bethlehem Church Road.

According to NCDOT the bridge sees about 180-220 cars a day, making it a low capacity bridge 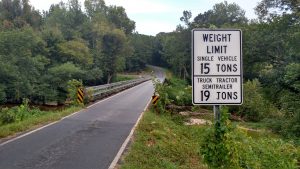 Due to its deteriorating condition, the weight capacity on this one lane bridge on Bethlehem Church Road was lowered this spring.

compared to others in the area. For example, the bridge over Little Creek on Old Aquadale Road sees about 560 cars a day. The bridge over Long Creek on N.C. Highway 138 sees at least 2,200 a day.

“Statistically, it doesn’t see a lot of use,” said Canipe.

However, for those who use it on a regular basis, the benefit of the bridge can’t be measured with numbers.

Curlee lives in the Porter area and works between Aquadale and Oakboro, so Bethlehem Church Road is his most direct route between the two. He crosses the bridge at least twice a day during the week.

Similarly, Jeffrey Swink, who travels a route for Coca-Cola in Albemarle, crosses the bridge twice a day in the opposite direction on his way into work.

“It would take a lot more gas to drive around the long way,” Swink said, who would have travel an extra eight miles a day to get around the bridge.

Others said the route is more than a way to get to work.

Williams, a senior citizen who lives near the intersection of Bethlehem Church Road and Old Aquadale Road, uses the bridge to get to her favorite grocery store in Oakboro.

“My doctor’s there, too, so I use the bridge at least a few times a week,” Williams said.

Others said they use it to get to the Wayside Restaurant in Stanfield, events in Oakboro and Locust, even as part of their route to Concord and Charlotte.

Despite the bridge’s deteriorating condition, many told officials they still prefer it to some of the turns on and off N.C. Highway 138.

“It’s really hard to see around those turns and people go flying through there,” said Tommy Curlee’s wife Jannie, who uses the Bethlehem Church bridge for her job with the NCDOT sign office.

If the bridge were replaced rather than removed, it might see more use, too, other speakers noted.

Margie Burris said she doesn’t use the bridge because of safety concerns, but she would if it were replaced. Emergency vehicles and school buses might opt to use it, too, if it were repaired, others added.

However, if NCDOT Division 10 uses its funding dollars to make the replacement, it will likely have to cut money from another regional project.

“We’re always competing for state funding so we have limited resources,” Haywood said.

Moreover, those tax dollars come from residents across the state, not just one area.

“So it’s not just the people here who will be paying for it,” Haywood said.

That doesn’t mean the bridge shouldn’t or wouldn’t be replaced, NCDOT officials assured.

Right now they are still in the evaluation phase of the project. Division 10 will accept public comments on the matter by phone, mail and email through Sept. 13.

“Those comments carry a lot of importance, it’s not just a formality,” Canipe said.

If residents can get enough support for replacing the bridge — particularly from county commissioners or other governing bodies — they would consider the other option, too, officials said.

Still, even if NCDOT decides to replace the bridge, it may have to close it for a while anyway.

Getting funding for a road project is a multi-year process, NCDOT officials explained. By the time it secures funding, the bridge could be too badly deteriorated to use.

“It’s unlikely we could get the money before the next inspection (in 2020),” Canipe said. “Depending on the score, it may have to close anyway.”

Residents still preferred that to not having the bridge, at all.

“And I think that’s true for a lot more folks than what’s here,” Williams said at the public input meeting. “There are a lot of people who didn’t know about it, still don’t know about it… we’re going to make sure they do.”