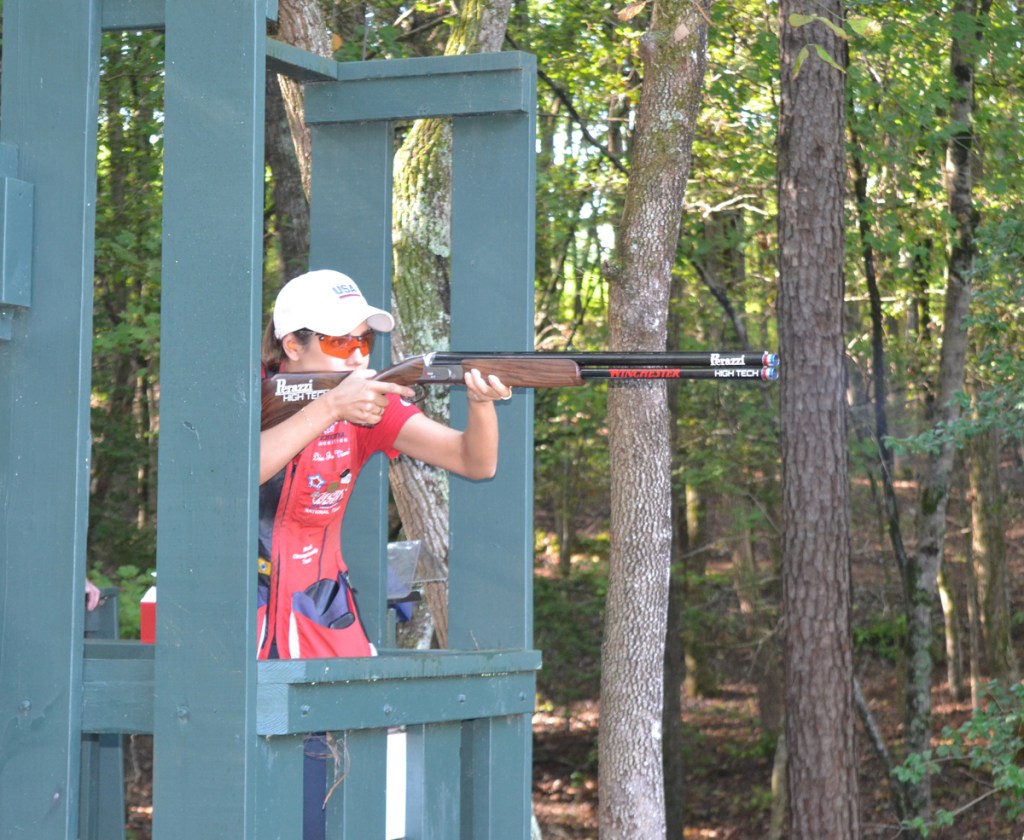 Shooting enthusiasts from across the country descended onto The Fork Farms in Norwood Thursday for USA Shooting’s National Sporting Clays Cup fundraiser.

The Fork Farm hosted the morning event as a contribution to the cause, with a second fundraising shindig slated for the evening at Childress Vineyards, of NASCAR’s team owner Richard Childress, in Lexington.

The event is one of four major annual fundraisers for the USA Shooting Team as it heads toward the 2018 World Championships and the upcoming 2020 Olympic and Paralympic Games in Tokyo, Japan.

“This one is special for a number of reasons,” said Keith Enlow, chief executive officer of USA Shooting, about the event at The Fork. “We don’t exist without the sponsors, memberships and the events.”

A nonprofit with an annual operating budget of $5-$6 million, the USA Shooting Team competes against state-sponsored teams.

DeLaRosa, 46, represents one of the more inspiring stories within USA Shooting. A Marine Corps veteran stationed at Camp Pendleton in 1993, DeLaRosa inadvertently interrupted an armed robbery of a convenience store. He immediately intervened by rushing the gunman. A second gunman, not observed by DeLaRosa, shot him in the back severing his spinal cord. The injury left DeLaRosa paralyzed from the waist down.

Because of his Marine training, DeLaRosa became accomplished at firearms.

After first competing at the National Veteran Wheelchair Games where DeLaRosa dominated the field, he next gained attention with his International Paralympic Committee Shooting debut at the World Cup in Fort Benning, Georgia.

In 2016, DeLaRosa finished second at a the IPC World Cup in Poland. That runner-up finish contributed to him making the 2016 U.S. Paralympic Team.

“I’m a sleeper. I came out of nowhere and got in,” DeLaRosa said of his sudden rise.

However, he had to fund his own efforts to advance any further.

“How does that happen?” said Enlow about how he responded to the injustice of DeLaRosa’s self-funding. He also points to him as the reason fundraisers are so critical to promoting deserving athletes.

Once a petite dancer before her dad introduced her to skeet shooting. Vizzi, 23, has put away her dance shoes for a 12-gauge shotgun.

“As a dancer I felt I was judged by my appearance. Now, I’m not judged by what I look like, but how good I am,” Vizzi said.

With only seven years experience, the reigning shotgun champion points to the importance of repetitions at reaching the sport’s pinnacle.

“You’ve got to always be smooth because smooth is fast,” she said.

During the stress of competition, Vizzi said she sings to herself to remain calm and to quickly forget a miss so as not to miss the next clay.

Talent is not enough, DeLaRosa said. He again relies on his Marine Corps training to stay calm during the stress of competition.

“I get excited. I can feel my heart rate going up,” he said.

A rapid heartbeat could cause a missed target. Instead, he added, DeLaRosa takes a succession of rapid breaths to bring his heart rate back down.

At only 19 years old, Garvey talks more like a veteran than a teenager. Of course, he began handling guns when he was a child, first competing at age 8.

Garvey compares the sport to golf, although he does not play the game. He does, however, read golf books to learn more about how to gain the game’s mental toughness.

“You have to really trust yourself,” said Garvey, likening the confidence to a golfer trusting his or her shot.

Again, seemingly wise beyond his years, Garvey, who competes in single-trap or bunker trap shooting, works The Fork’s Ordinary like the sport’s self-appointed ambassador.

“It’s not even about shooting anymore,” Garvey said. “It’s about meeting and talking to people, teaching kids the sport and attending events. It’s about sharing and growing the sport.”

Unlike many Olympic sports, there are numerous disciplines related to shooting. Therefore, the sport produces multiple opportunities at winning Olympic medals.

USA Shooting maintains a history of success with its athletes amassing 110 Olympic medals.

USA Shooting, a 501c3 non-profit corporation, was chartered by the United States Olympic Committee as the National Governing Body for the sport of shooting in April 1995. The organization implements and manages development programs and sanctions events at the local, state, regional, and national levels.

Headquartered in Colorado Springs, Colorado, at the U.S. Olympic Training Center, USA Shooting is dedicated to advancing the sport and supporting athletes and members of the organization.