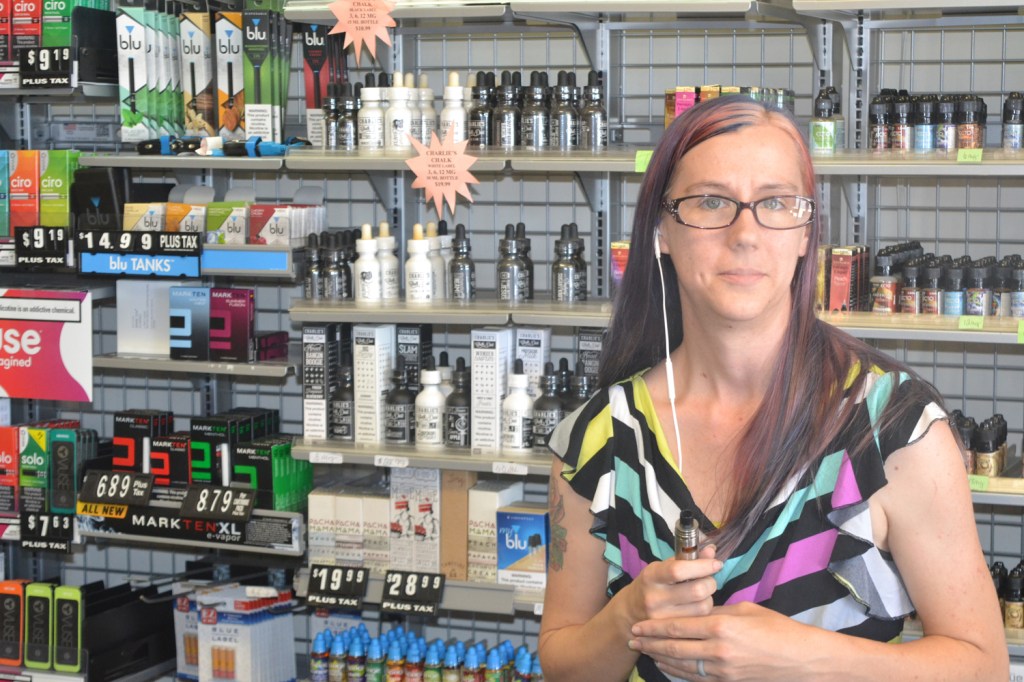 Autumn Huneycutt, an employee at Tobacco Road Outlet in Albemarle, takes intermittent drags on a vape while standing in front of a display of other electronic smoking devices. E-cigs are becoming increasingly popular, especially among today's youth.

To call vaping a healthy alternative to cigarettes would be an illusion best left to smoke and mirrors.

Electronic cigarettes, also known as e-cigarettes, or the even cooler nickname of vapes, not to mention a score of other slang terms, are gaining in popularity. Vapes are especially popular among teens.

Some traditional cigarette smokers are turning to vaping as a way to quit smoking while today’s youth tout the practice as safe. Ironically, evidence does not support either claim. There’s no scientific data that suggest e-cigs are effective for long-term efforts at cessation. Neither is there any data to indicate vaping is harmless, according to the National Institute on Drug Abuse.

In fact, some studies suggest vaping could be a gateway to smoking cigarettes or other drugs.

“We don’t yet know the long-term effects of e-cigarettes,” said Jennifer Layton, health education specialist for Stanly County Department of Public Health. “There have been no longitudinal studies.”

E-cigarettes are battery-operated devices used to inhale an aerosol that often contains nicotine, though not always. The aerosol also contains flavorings and other chemicals.

Nearly 500 different e-cig brands are presently on the market. They come in various forms and styles. Some look like traditional tobacco products like traditional cigarettes, cigars and pipes. Others resemble more sleek forms of technology, like pens, or USB memory sticks.

Some brands display unique characteristics. Like the brand called Blu, which glows a blue-colored tip as a makeshift ash.

Juul, pronounced jewel, is another brand with a more discreet design and a favorite among teens because of its inconspicuousness. It resembles a flash drive more than a smoking device.

Because of its popularity, Juul users have even coined the phrase “juuling” as another slang term for vaping the way Coke substitutes for other types of soda.

Vapes consist of a cartridge, which contains a liquid solution with various levels of nicotine, flavors and other chemicals, a heating element with a rechargeable battery and a mouthpiece for inhaling.

In most e-cigarettes, a puff on the mouthpiece activates the battery-powered heating device, which vaporizes the liquid in the reservoir cartridge. The user then inhales the resulting vapor, a process dubbed as vaping.

“The perception is that it’s healthy,” Layton said.

Like other tobacco products, most vaping devices contain nicotine — a highly addictive substance.

Autumn Huneycutt, an employee at Tobacco Road Outlet, said smokers are sometimes looking for ways to kick the habit.

“A lot of people start vaping to quit smoking,” Huneycutt said. “It’s a healthy alternative, well, it’s not healthy. It still has nicotine in it.”

She began vaping as a way to quit smoking so her children would be spared the second-hand smoke.

Kyle Shuffler, a user of Blu, said he, too, began vaping to help stop smoking. However, the 25-year-old Shuffler said whenever he drinks alcohol he often reverts back to cigarettes.

In many ways the popularity of e-cigarettes is trending much like traditional cigarettes before lawsuits, education, stiffer regulations and taxes curbed tobacco use. A preference for vaping starts with youth.

E-cigarettes have become the most popular form of tobacco among youth in the U.S. and during a time when fewer teens are choosing to smoke cigarettes.

And like traditional cigarettes, peer and social pressure contribute to teens experimenting with vaping.

Signage in North Carolina public schools is being updated to depict e-cigarettes.

Incidentally, this year marks the 10th anniversary North Carolina enacted a law that makes schools tobacco-free. Since 2008, the state has experienced a 50 percent reduction in cigarette use among high schoolers.

“Prohibiting the use of tobacco products in schools has contributed to the reduction in cigarette smoking among high school students,” said Jim Martin, director of policy and programs for the Tobacco Prevention and Control Branch. “That’s not a coincidence. An early study by the Tobacco Prevention and Control Branch showed that schools with tobacco-free policies had fewer students smoking, and the rates dropped more the longer those policies were in place.”

However, a N.C. Youth Tobacco Survey, published in June, revealed more than 16 percent of North Carolina high school students use e-cigarettes, and 23 percent stated they are considering use of these products in the coming year.

Consequently, efforts are underway to thwart the trend.

“E-cigarettes are now the most commonly used tobacco product among youth, and their use has increased exponentially,” said Dr. Susan Kansagra, chief of the Chronic Disease and Injury Section in DHHS’ Division of Public Health. “While we’ve reduced cigarette use, the use of e-cigarettes by youth overall and especially on campus is a public health threat. Schools are reporting they are commonly confiscating e-cigarettes.”

Look no further than the marketing of e-cigs to understand part of its popularity among teens. Advertising caters to youthful users given the assortment of different flavors and the uniquely designed devices, especially in this era of technological gadgets.

Because some devices look like flash drives teens are better able to conceal their use at school. Unlike regular cigarettes, vaping does not generate the distinct, offensive odor commonly associated with cigarettes.

Vaping is less expensive than smoking. E-cigs are not taxed like other tobacco products, keeping the costs down.

Some teens have enlisted their parents to buy them e-cigarettes, which are available at any location that sells tobacco products, under the guise the products are not harmful.

In addition to the presence of nicotine, e-cigs contain other chemicals that could be harmful. Again, there has not been enough research to develop conclusions.

Another health concern relates to the rechargeable battery and heating element. There have been some cases where the device exploded and resulted in the users suffering severe bodily burns.

As of last year the Federal Drug Administration began requiring e-cig buyers to be at least 18 years old. Before then, kids could buy them legally. Even with the new law regulation, enforcement has not been as strict in the sale of vaping devices. Besides, e-cig products are available online and where there is less regulation.

To ensure school employees, students and visitors are aware of the tobacco-free schools law, the Division of Public Health’s Tobacco Prevention and Control Branch is working with the N.C. Department of Public Instruction to update tobacco-free signs in schools. E-cigarettes were not depicted on the original signs, erected in 2008.

“Addressing e-cigarette use among young people is an important public health priority, as they contain nicotine, are addictive and can impact brain development,” Kansagra said. “Further, young people who use e-cigarettes are more likely to smoke cigarettes in the future than those who do not use e-cigarettes, thereby increasing their risk of heart disease, lung disease and many cancers.”