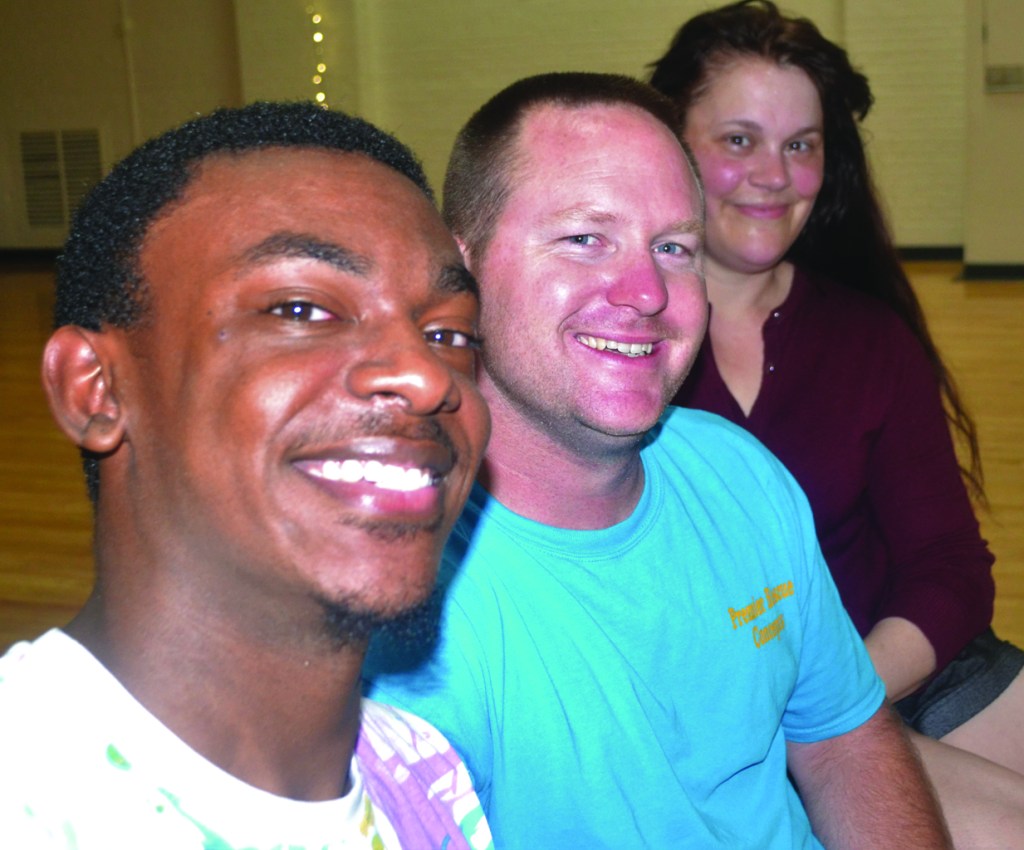 Contributed Caleb Hyatt, Travis Haywood and Laura Almond get ready for a final round of practice before this weekend's Stanly County Dancing with the Stars.

When it comes to Stanly County Dancing with the Stars, perhaps no team packs a punch like this one.

Made up of veteran dancers Laura Almond, Caleb Hyatt and Travis Haywood, it’s hard to think of another team in the whole history of the show that’s brought as much combined experience to the stage.

“It really has been so much fun, working with these guys,” Almond said.

Almond, the event’s first director as well as a teacher at Gray Stone Day School, has been involved with the show as either a director or choreographer since its inception.

Hyatt, a recent cosmetology graduate, isn’t far behind her. He was one of Almond’s early college students when the show began, so he came out as a singer that first year and has helped nearly every year since.

As for Haywood, he’s the least experienced of the group. The Albemarle firefighter joined on as a dancer just last year, but his speedy footwork at his first show quickly caught the attention of both Almond and Hyatt.

“I told Caleb, our partner has fast feet,” Almond said. “We gotta do something with that.”

And it didn’t take them long to figure out what.

Combining a high-energy jive with a spunky flair of pop to a classic Bruno Mars song, the trio laid out a whole dance routine at their first meeting.

“I don’t think I’ve ever worked something out that quickly,” Almond said.

While they still needed to figure out the details, the framework of the dance came together almost like magic, Hyatt agreed.

“It just fell into place,” he said.

Which perhaps shouldn’t be too surprising. Both he and Almond have become close friends over the years. Ever since that first year of Dancing with the Stars, they’ve purposefully kept up with each other, so they know each others quirks pretty well.

“He’s just an amazing person,” Almond said. “God gifted him with so much. When you hear him sing, when you see him dance, it’s like watching a Michael Jackson prodigy… I don’t think I could have kept at this without his support.”

It turned out Travis fit easily into their fun-loving, bantering dynamic, too. After just a few meetings he was tossing quips just as fast as the two of them.

“But I think what’s meant the most is we share a passion for the purpose behind this,” Almond said.

All the money raised through Stanly County Dancing with the Stars goes to a children’s advocacy center called the Butterfly House, Almond explained. They use the money to help abused children medically, mentally and legally.

“Which hits close to home for me,” Almond said.

While teaching dance over the years, she met a number of students whose dads molested them as kids, she noted. Dance was actually one of the activities that helped them to move past that, to see that they could be touched appropriately by a man.

“So I’ve always felt like this (show) was so fitting,” Almond said.

For the guys’ part, Hyatt has also done community service with the Butterfly House, Haywood has worked with them through the fire department.

“When people realize what they’re doing it for, those are the moments I love the most,” Almond said. “And we’ve all got that.”

And maybe with the help of a little fast footwork, a theater full of spectators will soon take that to heart, too.

Performing in the 2018 Stanly County Dancing With The Stars will be:

Tickets for the 2018 Stanly County Dancing with the Stars are:

$30 per person (including tickets for children) for mezzanine seating;

$20 per person (including tickets for children) for balcony seating.

Tickets are available by calling the Stanly Health Foundation office. Call 980-323-4103 with your Visa or Mastercard.

Tickets can be purchased by cash or check at: Starnes Jewelers, 127 W. Main St., Albemarle.

* * The event benefits the Butterfly House, a child advocacy center in Stanly County. * *