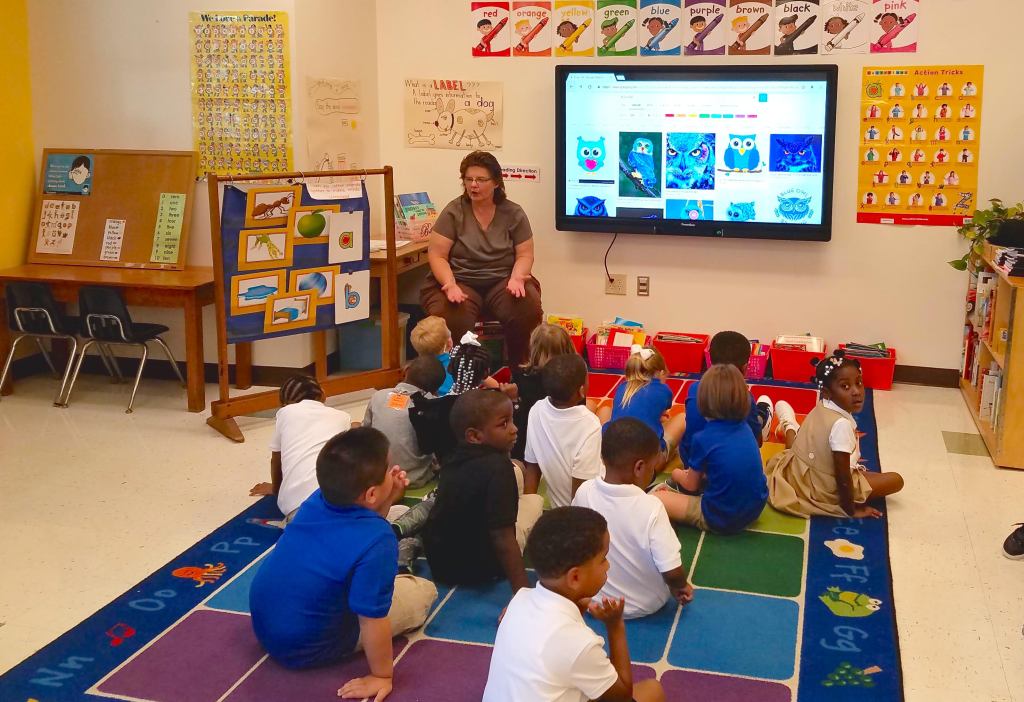 Central Elementary students gather around an interactive Promethian TV panel, one of the new technological projects at SCS

Since 2013, Stanly County Schools has provided every student — grades 3-12 — with a computer during the school year. High school students are even allowed take their computers home to research assignments or work on projects.

But sometimes that alone isn’t enough.

According to recent data, about 5 million American families with school age children do not have reliable internet access at home. So while they may have devices capable of tackling online assignments, they can’t always get done.

In order to help the students at AHS bridge that gap, Principal Emily Shaw and SCS central staff decided to apply for a new technology initiative known as the 1 Million Project over the summer.

Founded by Sprint CEO Marcelo Claure in 2016, the project aims to provide 1 million students with internet over the next decade via hotspot devices. Over 109,000 such devices were distributed in the first year alone. Thousands more will go out this year.

And now several dozen of them are earmarked for AHS.

Not long before the school year started, officials explained, AHS was selected for 50 devices through the 1 Million Project. Over the next few weeks, the non-profit will oversee a screening process and device distribution at the school.

“We are always excited for any opportunity that we can provide for students that can enhance their education outside of the school setting,” said Shaw.

And while that program may be limited to a few, the AHS students aren’t the only one that will benefit from new technological initiatives this year.

According to SCS’s Chief Technology Officer Shawn Britt, every SCS school will get new tech in their classrooms during 2018-19.

At the middle and high school levels, every teacher will be getting a new device that functions as both a tablet and Chromebook.

“This device should provide the teacher more flexibility in the classroom,” Britt said.

At the middle school level, students will also get new personal Chromebooks, which represents another 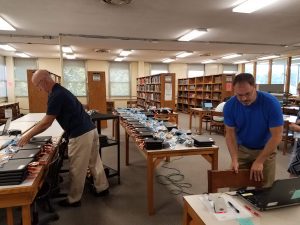 five year commitment to the “one-to-one” computer program by SCS.

But the perhaps the biggest technological investment will be made at the elementary level this year.

The projectors in every main classroom will be replaced with Promethean interactive TV panels by the end of the year, Britt detailed. The screens — 65 inches and bigger — work like giant tablets, with apps and internet access, while at the same time functioning like white boards and TV screens.

“Ideally we want the students to be using them as much of the teachers,” Britt said, pointing out that 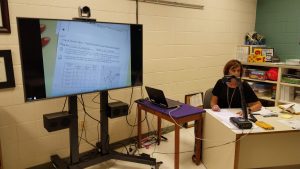 WSHS teacher Christi Edwards experiments with the distance learning features on an interactive TV panel. SCS would like to use the panels to expand class offerings between high schools.

the panels were hung low in the kindergarten classrooms so kids could reach them. “We will need to replace all the classroom projection systems in our Middle and High Schools (in the future), too.”

On top of that, the school implemented new SCS websites this year. Along with redesigned pages for the each of the schools and the central office, the online upgrade also included a new tech support website for teachers. A reworked arrangement on copier and printer technology also cut back on costs for the department.

“Shawn’s group has looked under ever stone to save dollars that we will use for kids,” Superintendent Jeff James said. “We are excited and spending dollars wisely.”