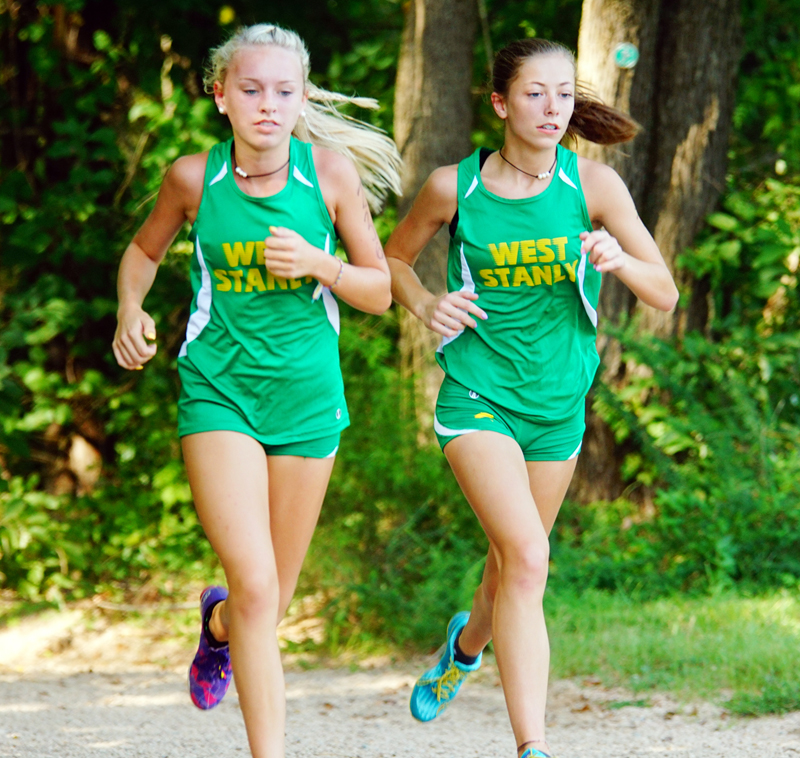 The West Stanly men and women cross-country teams opened the conference season with victories in the Rocky River Conference preseason opener on Aug. 28.

Those victories came in different manners as the Colt women dominated the competition while the West Stanly men narrowly ran to victory.

All six RRC teams were on hand as Mount Pleasant High hosted the opener using a new course at Frank Liske Park. The teams were greeted with temperatures in the mid-90s. The preseason conference meet gives the teams an early season opportunity to get a look at each other before returning in October for the Rocky River Conference Championships.

The Colt women took five of the first six places, including the top four, and six of the top nine conference spots. West finished with a team score of 16, followed by Central Academy (52), Mount Pleasant (63) and East Montgomery (118). Anson and Forest Hills did not have enough runners for a team score.

Senior Pierson McManus looks set to defend her conference crown with teammate freshman Natalie Almond close behind. The team competition was over by the mile mark as McManus and Almond, along with seniors Brooklyn Simpson and Maddie Miller, sped through the mile mark together leaving the competition behind. McManus and Almond hit the one long hill on the course and never let up on the gas.

The senior then ignored the heat, surging about halfway through the race, pulling away to win in a season best 20:49.

Almond raced to a second-place personal record 21:04. The young Colt moved up to the fifth fastest Colt of all time.

Simpson and Miller found themselves running alone the last half of the race. Simpson still dropped her opening season time to 22:40 for third place, with Miller close behind at 23:12 for fourth place.

Sophomore Rachel Efird gave the Colts a chance at a perfect score by staying close to Mount Pleasant’s top runner, senior Emily Thomas, but the Tiger runner was just a little faster the last 400 meters. Efird ran 23:54 for sixth place.

Junior Katherine Pollard gave the Colts six top 10 runners, coming in at 24:58 for ninth place. The Colts had two freshmen to fill their eighth and ninth spots, with Laney McCollum 26:32 and Aniston Hann 26:33 finishing 15th and 16th, respectively. That gave the Colts eight out of the first 16 runners out of 54 women completing the course.

Similarly to last season, the Colt men were in a tight battle with Mount Pleasant and CATA. West finished with 40 team points, followed by Mount Pleasant (43), Central Academy (44) and East Montgomery (113). Again, Forest Hills and Anson did not post a team score.

Times for the runners were all over the place depending on who handled the heat the best. The Colt men faired better going out at a more conservative pace while allowing the competition to burn themselves out.

Junior Korbin McNeill may have set the best pace of all, hanging back about 20 seconds from the lead pack through the mile. McNeill continued to move up as runners faltered in the heat. By the time runners hit the lake with a half-mile to go, McNeill was in second place and could see leader senior MacKay Burke from Mount Pleasant. McNeill had one last surge but just ran out of real estate. The junior still kicked home for second place in 17:57, a new personal best moving him to 22nd all time.

The Colts were without the services of top five runner Daniel Brattain, who was attending a funeral.