The heat was on Thursday afternoon in Albemarle as runners from nine area schools raced in the Vac & Dash Cross Country Clash. With the temperature above 90, runners ran strategically and hydrated at the water stations to navigate the challenging hills at Chuck Morehead Park.

The boys raced first as the pack of lead runners ran steady through the first half of the race. On the second half, Mount Pleasants MacKay Burke picked up the pace and raced to victory for the second consecutive year by running the 3.1-mile course in 20:05. Fellow Tiger Lincoln Baxter placed second with a 20:24 performance. 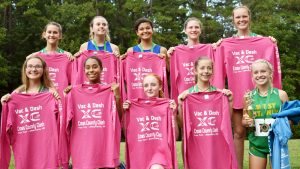 South Stanly’s Daniel Vasquez slid in the middle of the Colt pack to place seventh with a 21:59 performance. The top ten runners were awarded medals and long-sleeve t-shirts for their efforts.

Nicholas McLure was North’s top runner. The freshman placed 11th with a 22:10 performance. Drake Barkley was the top scorer for Greater Cabarrus with a 22:53 run and 16th place finish. Noah Manus was the top Gray Stone performer. He came in 14th place by crossing the finish line in 22:46.

Albemarle and Anson did not have enough runners to score as a team. Anson’s Trenton Smith placed 30th in 25:52. Cohen Whitley was the top Albemarle runner. He ran the course in 32:03 for a 49th place.

The girls raced second. West Stanly freshman Natalie Almond was leading the way with a half-mile to go when she ran off the course a bit after climbing the hills for a second time. Teammate Pierson McManus saw Almond off the course and called at her to get back on the course.

Almond made a gallant effort to get back on the course to catch McManus. McManus held off Almond’s charge to with the race with a 23:38 performance. Almond was second in 23:50.

North Stanly took the next two spots with Taylor Burleson taking third and Lexi Goode placing fourth with times of 25:13 and 25:22 respectively.

Gray Stone’s Jean Holman was fifth in 25:30. West Stanly’s Brooklyn Simpson battled a tight calf muscle to finish sixth with a gutsy 25:45 run. Fellow Colt Rachel Efird was the next runner to cross the finish line in 26:14.

Mount Pleasant’s Emily Thomas and Ashleigh McDonald finished in eighth and ninth with times of 26:23 and 26:36 respectively. West Stanly’s Maddie Miller rounded out the top ten medal winners with a 26:47 run.

West Stanly swept the meet with the girls winning with a team score of 26. Gray Stone took second with 65, followed by North with 70, Mount Pleasant’s 89 and South Stanly’s 136. Anson and Greater Cabarrus did not have enough runners to score as a team.

In the JV race, the top three boys and girls won medals and t-shirts. Greater Cabarrus swept the top three spots for the boys with Paden Hill (25:54) taking first, followed by Jacob Price (26:06) and Landon Singleton (26:08).