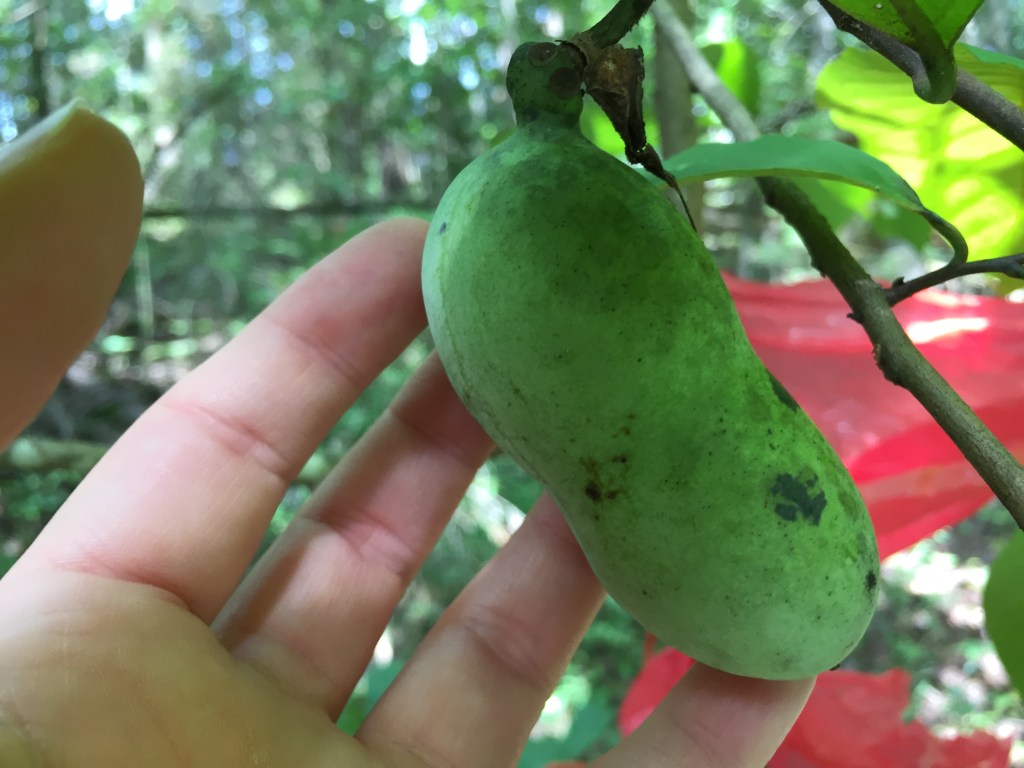 Crystal Cockman writes about the abundance of pawpaw fruit.

While walking in the woods the other day, I spotted a grove of native pawpaw trees. These trees are hard to miss with their large leaves, much larger than other native species found in our local forests.

Upon closer inspection of the trees, I found a fruit on one of them, and it was pretty big, but I was disappointed to find that it was not quite ripe. I have found ripe paw paw fruit in the past and eaten them, and to me they are delicious.

Crystal Cockman writes a column for The SNAP through the Three Rivers Land Trust.

They taste like a combination between a mango and a banana. Pawpaw are sometimes even referred to as “hillbilly mango” or “poor man’s banana.”

Pawpaw (Asimina triloba) is a small deciduous tree native to the eastern United States and Canada.

They grow wild in 26 American states, from Michigan to Louisiana.

They are a clonal tree, which means they grow in a group and members of that group are identical genetically. They grow vegetatively from a single ancestor and are sometimes connected underground by roots. Biologically this groups may even be thought of as a single plant.

Pawpaw flowers are burgundy in color and they can be found in early springtime. The flowers are insect pollinated and need cross-pollination.

As a result, the flowers have a faint scent of rotting meat, to attract blowflies or carrion beetles. The fruit is the largest edible fruit indigenous to the United States.

Some people may have an allergic reaction to paw paw, although that is uncommon.

Historically, both Native Americans and European settlers enjoyed pawpaw. It is even believed that the widespread nature of paw paw is a result of Native American’s spreading the tree across the eastern United States.

As a result, deer don’t often eat the leaves or twigs. They even confer these chemicals to the zebra swallowtail, which offers them protection from predation, as they don’t taste good to predators.

Pawpaw are found in the understory of a forest, which means that they are above the forest floor but below the tree canopy.

You usually find paw paw near river or creek bottoms, but in recent decades they have been found creeping up into the uplands.

They are not very fire-tolerant, so the disappearance of fire from the landscape can be considered part of the reason for their expansion. Their lack of predation from deer can be thought of as another reason.

Pawpaw can also be cultivated, though the fruit has a short shelf life. That’s why you’re more likely to find them at a farmers market than a grocery store.

Pawpaw is the featured ingredient in a beer produced by Fullsteam Brewery in Durham. It is named Dinnisen’s Orchard, in honor of the man who raises the pawpaw trees. The beer is a Belgian-style ale and is a seasonal feature at the brewery. Pawpaws can also be made into jams or jellies or blended into ice cream.

Pawpaw are widespread in Stanly County, and can be found at many local parks. Keep your eye out for their ripe fruit in September and October.

If you can beat the wildlife to the fruit, it’s a great snack while out in the woods.

I’ll certainly be keeping my eye out now that I know they are beginning to ripen, and maybe on my next outdoor excursion I’ll be lucky enough to find one ready for the taking.

Crystal Cockman is land protection director for Three Rivers Land Trust, of which Stanly is part.

LETTER TO THE EDITOR: Freedom is gone