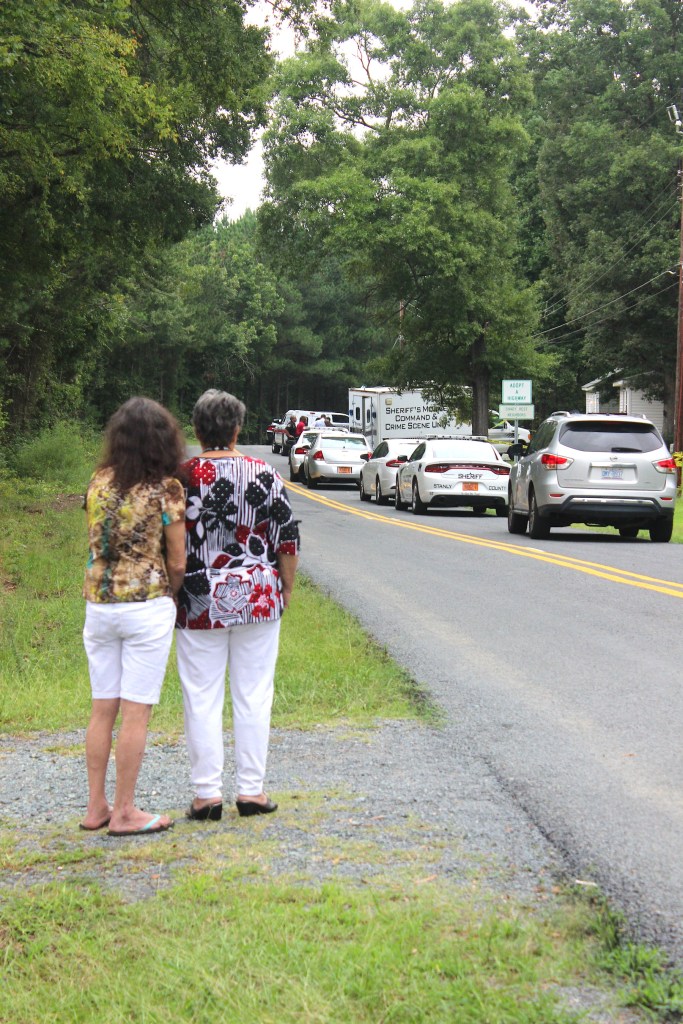 The mother and grandmother of homicide victim Cindy Caple stand at the edge of the crime scene awaiting news.

The Stanly County Sheriff’s Office has confirmed the identities of two victims in Monday’s double homicide and arrested a suspect.

The victims were James Sturdivant, 56, and Cindy Capel, 38, law enforcement said. Both were shot and killed at Sturdivant’s house on Shady Rest Road, a residential street off N.C. Highway 740 between Badin and New London.

Their deaths mark the first double homicide to take place in Stanly County since 2009.

A third victim was shot at the house as well. He is now in stable condition, but as the only surviving witness, the Sheriff’s Office has not released his name.

The suspected shooter, however, has been arrested. 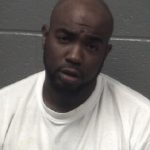 Meeko Harris, 33, is believed to have fled to Albemarle after leaving the scene. From there he continued to a relative’s house in the Wadesboro area.

“Because of what was on the news media, they realized he was wanted in connection to the homicide

in Stanly County,” Capt. Brian Hatley of the Stanly County Sheriff’s Office said. “After that, the arrest was made without incident.”

As for why Harris shot the three victims, the Sheriff’s Office is still piecing that together. A crime scene investigation is complete and autopsy results and further interviews are pending.

“Once they’re done hopefully we’ll be able to establish some kind of narrative,” Hatley said.

What they do know is Harris has a history of deadly violence.

The suspected shooter was convicted of second-degree murder after shooting another Stanly resident, Mecos Crump, on June 18, 2004.

Crump died about three weeks later from his injuries and Harris went to prison for 12 years. Harris was released only months before Monday’s shooting.

As for information on the victims, Hatley said Sturdivant, Capel and the third victim were all living in Sturdivant’s house.

Sturdivant began renting there about two months ago. Capel and the unnamed victim moved in sometime after that.

Their connection to Harris is not clear.

According to neighbors, the shooter and the survivor may have been related.

“I heard five or six gunshots, but didn’t pay it any mind,” said Nathan Harris-Bey, who lives in the house next door. “People shoot off guns around here all the time.”

However, a few minutes later he heard a banging at his door. When he went to go answer it, his neighbor — the surviving victim — was there.

“He was standing on my porch, been shot five times, then drug himself all the way over there,” Harris-Bey said.

“I went in to the house and got stuff,” Harris-Bey said. “Towels, shirts anything I could grab and to wrap it up tight. Then I stayed with him till they came.”

When police arrived, the shooter was gone. The unnamed victim was taken to the hospital and officials roped off three houses along the road. All three had blood on their porches, neighbors said.

“(The injured victim) tried to go over to the other neighbor’s place before he came over to mine,” Harris-Bey explained.

Christina Braley, who lives at the third house that was roped off, came home from work when she found out what had happened.

“I wanted to get here before my son got back from school, make sure he doesn’t see this,” Braley said.

Braley added that Capel and the injured victim had only moved into Sturdivant’s house temporarily.

“(Capel’s) house was getting repaired after a storm damaged it,” Braley said.

Capel’s mother and grandmother, Donna Blalock and Hilda Capel, also stood at the edge of the crime scene.

Hilda Capel had talked to her granddaughter that morning, around 8:30 a.m.. The two were going to court, she said, so she was driving over to pick her granddaughter up when she came upon all the police vehicles.

“I can’t believe it was her,” Blalock said.

As the two stood there, neighbors came over to pray with them and hold their hands.

“You always know death is going to happen, but you don’t know when,” Hilda Capel said. “I guess when it’s our time to go home, it’s time to go home… I’ve just got to trust that she’s in God’s hand’s now.”