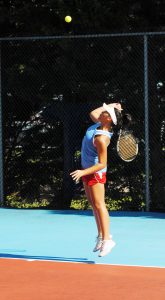 North’s Faith Wang fought into a third-set tiebreaker to earn a win for the Comets at No. 2 singles in the team’s home match against Gray Stone. (Photo by Charles Curcio)

On Sept. 6, the Gray Stone women’s tennis team traveled to North Stanly for a battle between two teams who were undefeated in Yadkin Valley Conference.

Gray Stone opened the season with five wins in a row, losing to Cox Mill in a non-conference matchup Aug. 23. The Knights then won four YVC matches in a row heading into the match with North.

The Comets were 6-0 heading into the match — all in conference play.

The two teams split singles but the visiting Knights swept doubles to improve to 9-1 on the season and 9-0 in YVC play with the 6-3 win. 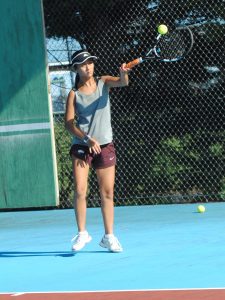