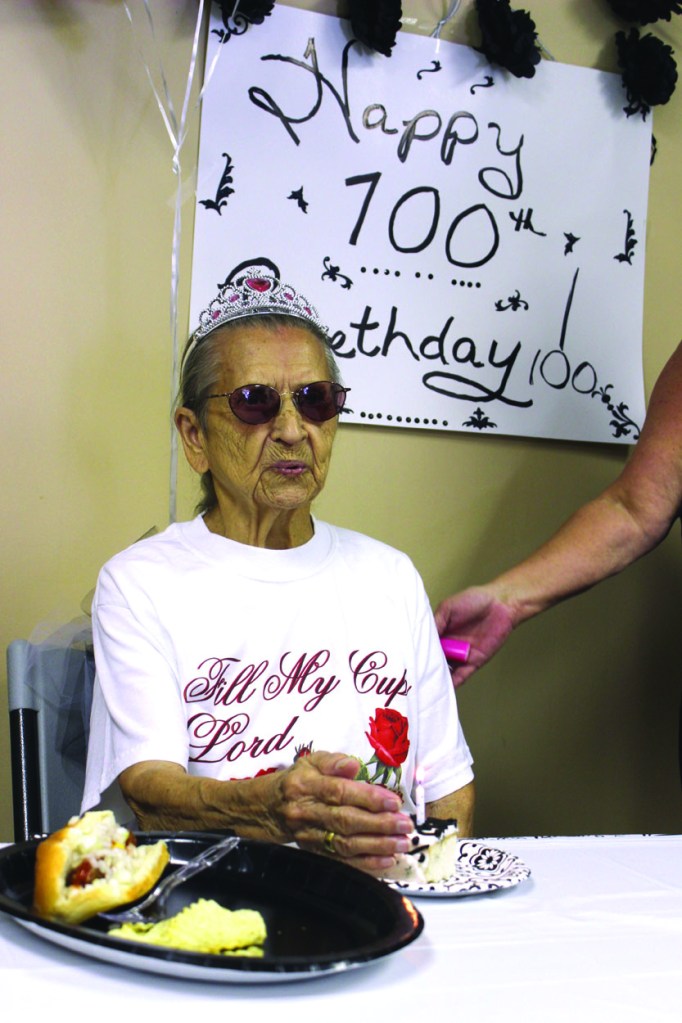 Anna Staats celebrated her 100th birthday this month in the Forrest Oaks community.

Resident Anna Staats turned 100 on Tuesday, making her the first to reach that milestone in the Albemarle housing development, as well as the oldest person to live there ever.

“She may be 100, but she looks and moves likes she’s 70,” site manager Angie Eudy said. “I expect she’ll hold that record for a good long time.”

Staats, who still tends the neighborhood garden and drove a car until last year, has always been a community favorite with her colorful stories and witty comebacks, friends said. So when her birthday came up, staff and residents wanted to do something special.

“We weren’t going to miss out on celebrating Miss Anna,” said Kristy Poteat, the daughter of Staats neighbor.

Opting for a surprise party, they secretly gathered about 25 residents and family members at the community office Sept. 6. After sneaking in food and decorations, they made up an excuse for Staats to come by.

“Well, I’ll be,” Staats said when she walked in the door.

Along with eating and opening cards, Staats shared stories from her life. The first tale was one of her childhood in northern Virginia.

Born in Marion, Virginia to a family of farmers, Staats talked about how she was always taking care of chickens and cows and crops.

“I can still remember my daddy on a plow,” Staats said. “I loved my parents so much.”

When she was a young woman, Staats moved to Norfolk, Virginia, and was still living there when World War II broke out. As the biggest naval city on the eastern coast, she constantly heard talk about potential air raids.

“So we put up these big, old blackout curtains,” Staats said. “Heaviest things you ever held.”

Determined to do something more than just wait, though, Staats joined the war effort by packing bags of ammunition for the front.

It wasn’t until decades after the war that Staats even heard about Albemarle. One of her four children, Ralph Weaver, ended up marrying a woman from Stanly County and settled down there, so Staats would come down regularly to visit.

“I got rather fond of the place,” Staats said.

So in 1989, Staats moved into the then brand new development of Forest Oaks. After a brief return to Virginia in 1992, she came back to the same neighborhood and has remained there since.

“I can still remember when she moved in 21 years ago,” said community creator and former site manager Elaine Morton, who came out for the party.” A little firecracker full of stories.”

From the trials and tribulations of working on a farm, to working with special needs children in Norfolk, to her love of hunting, everyone at the party could remember a story Staats had told them.

Her sons Ralph and Jack Weaver — both living nearby now — recalled her stalking deer through the forest, stuffing squirrels into the pockets of her giant hunting coat and bringing home dozens of trophies from archery competitions.

“She’s just fascinating,” Poteat said. “I go over there and I can just listen to her for hours.”

And as everyone sat back and listened to story after story at Thursday’s party, it seemed she wasn’t the only one.

“Here’s to learning from Miss Anna for years to come,” Eudy said.