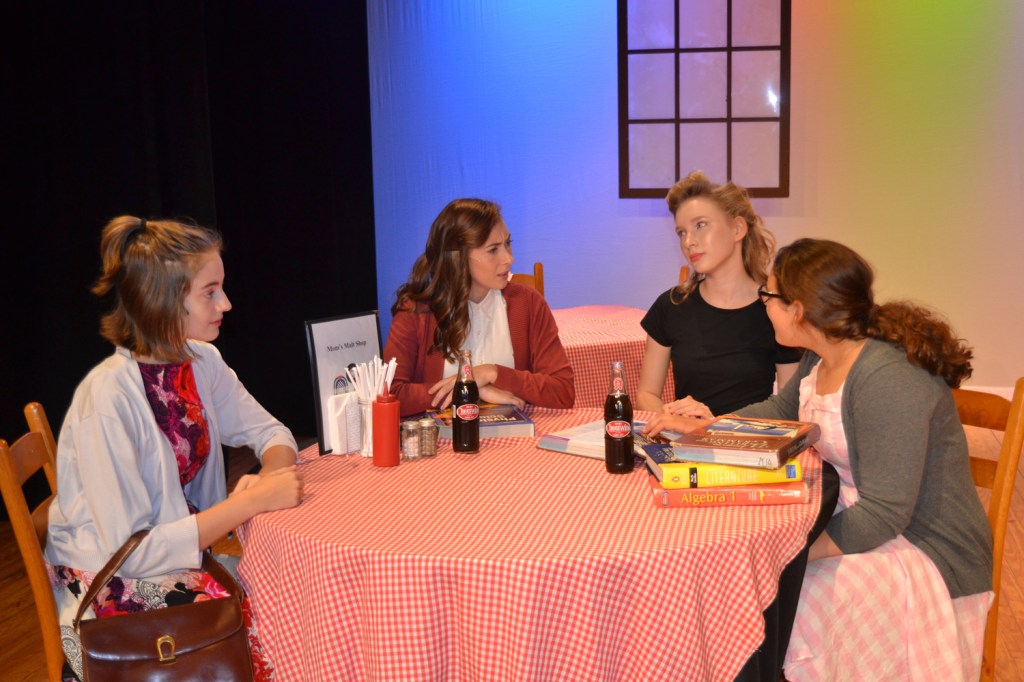 Sydney Jenkins, left - right, Sarah Alexi, Blair Burris and Claire Abercrombie rehearse a scene of the play "Meet Me at the Prom." The Talent Company's production is scheduled to start 7:30 p.m. tonight at Central School Auditorium.

There’s a high school prom taking place in Albemarle beginning tonight, at least a fictional one and on stage.

“Meet Me at the Prom” opens tonight at the newly renovated Central School Auditorium. A cast of 18, comprised of 16 area high school students and two adults, will take to the stage in The Talent Company’s production of the comedy by James Reach and adapted as a play by Samuel French.

Ironically, the story is about students at Central High. But that’s only one of two pieces of irony related to the play. Bradley Eudy was among the cast in “Cats” to last perform in the auditorium before it shuttered in 2007. Eleven years later, Eudy is directing “Meet Me at the Prom” as the first play to take the stage since its reopening.

“It’s kind of cool to be involved in the last production and then coming back for the first one,” Eudy said.

Set in the mid 1950s, students routinely gather at Mom’s Malt Shop where drama ensues during the week of Thanskgiving. Two major events are scheduled at Central High, the Seniors’ Thanksgiving prom and a key football game.

Meanwhile, two rival girls are vying for prom queen honors. Julia Cartwright, whose dad is president of the local band, and the popular Sheila Rollins hurl insults at the other in their quest to become queen.

Other drama unfolds along the way. Stolen ticket money evolves into a teenage whodunit with an innocent one accused before the guilty person is finally revealed.

Claire Abercrombie, a senior at Gray Stone Day School, plays Gert Anderson, a glasses-donning intellectual. Acting since the seventh grade, Abercrombie said those in theater develop a special camaradiere while fostering a sense of community.

“It’s like a second family,” she said. “The way we all get along helps convey relationships onstage.”

The play marks the first of three for the season for The Talent Company.

Performances begin at 7:30 tonight through Saturday evening, with a matinee slated for 2:30 p.m. Sunday.

Tickets will be available at the door at a fee of $5.

Plans call for the show to go on despite the threats posed by Hurricane Florence. However, should the weather turn severe and public safety compromised, showtimes could change. Such announcements will be shared on social media.